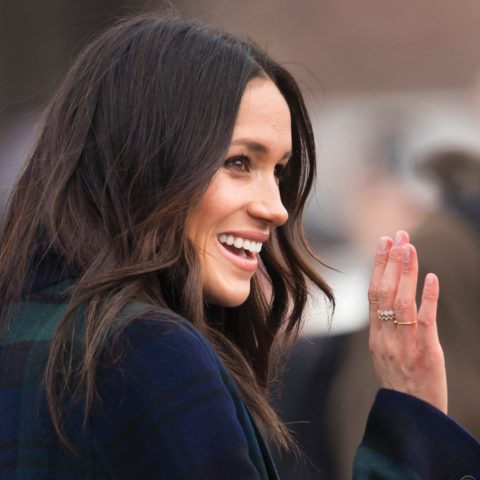 Meghan Markle’s engagement ring is undoubtedly grand and we’re just hours away from seeing her wedding band, but I don’t think they’re her most interesting pieces of jewellery. The three thin gold bands she wore individually on her right hand this past January inspired news outlets to consult palmistry experts on what the adornments might mean. More compelling than the dubious connection between a thumb ring and controlling tendencies is the fact that they’re more readily available to the average woman, coupled up or not, and don’t require the bankroll of a well-off fiancé, prince or otherwise.

These diminutive everyday jewellery pieces of Markle’s—one of which is a 14-karat yellow-gold pavé bar stack ring with .05-carat diamonds by Zofia Day—fit into a fast-growing category dubbed “demi-fine.” Although not clearly defined, “demi-fine” is the term that Net-a-Porter attached to a selection of lines it began selling in 2016 that fall between fine jewellery and costume jewellery; they use many of the same materials as the former yet are more affordable and fashion-forward, like the latter. One of the category’s bestsellers is New York-based Wwake, founded by Vancouver-born designer Wing Yau.

Only a handful of Wwake’s pieces are available in sterling silver, while the majority of them are made from 14-karat gold. Yau also uses plenty of diamonds, but the opal is Wwake’s signature stone, and with four millimetres as its standard size, it’s more affordable: The cost difference between opals and diamonds is significant—$600 versus $3,100. In 2012, Yau initially launched Wwake with a sculptural collection featuring materials like rope and thread as well as bronze, gold and silver. A year later, she committed to creating fine jewellery, and Wwake’s sales more than doubled the following year.

Wwake’s core customer is Yau’s own demographic: millennials. “I think our generation wants to invest in something that will last a lifetime, especially after going through the economic struggles of the recession at the beginning of [our] careers,” she says. “We’re looking for something that is stable in all forms.” The tiny scale of Wwake’s pieces is attractive both aesthetically and financially. (Prices range from $46 to $9,600, with most items costing $1,000 or less.)

“Our customers can build their collections faster than they can with higher-end fine jewellery,” says Yau. “Maybe it mirrors how we use our phones, how our timing is a lot faster with everything.” Predominantly self-made women, the customers also aren’t waiting on other people or for milestone moments. “They come up with great excuses to buy themselves jewellery,” chuckles Yau.

A recent market survey conducted by Birks confirms this purchasing shift. “We buy our shoes, we buy our handbags and we definitely want to buy our own jewellery,” says Eva Hartling, vice-president and CMO of Birks. “We’re seeing many more self-purchasing women choosing pieces for themselves.” As a result, the 139-year-old fine jeweller is retooling how it designs its collections and stores.

In 2015, Birks created Rock & Pearl—its first full collection of sterling-silver pieces—as an intentional effort to offer an entry-level price point. With most of the pieces priced under $500, it was one of the brand’s most successful launches to date.

Drawing on the breadth of its design motifs and materials, Birks launched Iconic in November 2017. “Iconic is minimalist design—the weight in gold is not so great that it dictates a higher price point,” says Hartling. The line of mix-and-match stackable rings ranges in price from $150 to $4,995, with most of the gold and diamond pieces coming in at under $1,500. No stranger to Birks, Markle wore rings from the Iconic collection during her recent visits to Wales and Scotland.

Focus groups and design panels are the new norm for Birks’s all-female creative team, and the consensus is that women seek a balance between trends and timelessness. Even the engagement ring market has changed. “Although women may have the budget to choose anything they want, they’ll still often say ‘No, I don’t want my ring to be too big; I don’t want the biggest diamond. I just want something that fits the style I like.’ It’s not about spending the maximum amount they can,” says Hartling.

Motivated by both her own and her clients’ transitioning tastes, Vancouver-based personal stylist Michelle Addison collaborated with jeweller Negar Khatami to launch Roque late last year. “I am at that age—almost 40—where there is more interest in longevity. We’re not buying tons of jewellery anymore, so it has to go with a lot of our wardrobe,” says Addison. “If we can’t wear it every day, it’s not good value.”

Clean and minimal (Addison cites Phoebe Philo’s Céline as an inspiration), the jewellery line is fine in more ways than one (just like Wwake), with prices starting at $55 for a tiny, singular 14-karat gold stud and going up to $3,700 for a triple diamond necklace. “We’d never be able to do a huge, chunky necklace in real gold because it would cost something like $12,000, and we’re not sure people want a $12,000 heavy gold necklace anyway,” says Addison. “Our stuff is modern but light.” She also thinks that anything over $1,500 gives women pause. “It seems everything under that is ‘Well, it’s expensive, but I can do it.’”

Khatami sees a very practical side to owning higher-quality pieces: “If you have a bunch of gold jewellery, it’s an investment; you can always turn it into dollars.” And, as Yau alludes to, beyond demi-fine jewellery being a fashion accessory, perhaps its growing popularity is also due to a desire for more permanence. Precious metals are more stable than most economies and relationships, and whether we’re betrothed or not, the pieces we buy for ourselves serve as a subtle, stylish and enduring declar­ation of independence.

Photography via Getty/ WPA Pool / Pool
Get the best of FASHION in your inbox Thanks for signing up!
The latest fashion, beauty and celeb news delivered right to your email #FASHIONforall Now, check your inbox to complete your subscription
We won’t ever use your email address for anything else
Want even more FASHION? Follow us on social media.