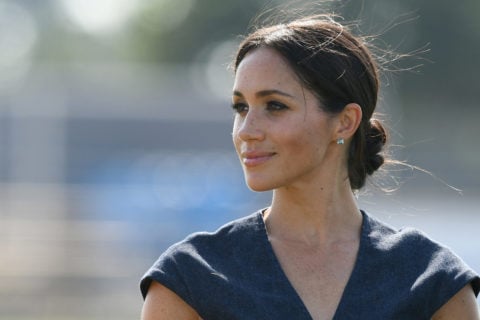 Meghan Markle Reveals She Had a Miscarriage in Moving Op-Ed

"I knew, as I clutched my firstborn child, that I was losing my second."

Meghan Markle has opened up about suffering a miscarriage earlier this year in a poignant and moving essay on loss for the New York Times, published today.

The op-ed, titled The Losses We Share, begins with the Duchess of Sussex describing a normal morning in July before suddenly feeling “a sharp cramp” as she changed Archie. “I dropped to the floor with him in my arms, humming a lullaby to keep us both calm, the cheerful tune a stark contrast to my sense that something was not right. I knew, as I clutched my firstborn child, that I was losing my second.”

She continued, “Hours later, I lay in a hospital bed, holding my husband’s hand. I felt the clamminess of his palm and kissed his knuckles, wet from both our tears. Staring at the cold white walls, my eyes glazed over. I tried to imagine how we’d heal.” She writes that upon remembering her and Harry’s tour of South Africa when she was asked by a journalist if she was OK, she realized as she watched Harry’s “heart break as he tried to hold the shattered pieces of mine… that the only way to begin to heal is to first ask, ‘Are you OK?'”

The Duchess then touched on the very public losses the world has seen and endured this year from COVID-19 deaths to Breonna Taylor and George Floyd – as well as the loss of community, replaced now with “division.” She writes, “It seems we can no longer agree on what is true. We aren’t just fighting over our opinions of facts; we are polarized over whether the fact is, in fact, a fact. We are at odds over whether science is real. We are at odds over whether an election has been won or lost. We are at odds over the value of compromise. That polarization, coupled with the social isolation required to fight this pandemic, has left us feeling more alone than ever.”

Speaking again of her and Harry’s own personal loss, Meghan wrote, “Losing a child means carrying an almost unbearable grief, experienced by many but talked about by few. In the pain of our loss, my husband and I discovered that in a room of 100 women, 10 to 20 of them will have suffered from miscarriage. Yet despite the staggering commonality of this pain, the conversation remains taboo, riddled with (unwarranted) shame, and perpetuating a cycle of solitary mourning.” She continued, noting that the brave women who have shared similar stories “opened the door, knowing that when one person speaks truth, it gives license for all of us to do the same.” The Duchess added that what the couple has learned is that “when people ask how any of us are doing, and when they really listen to the answer, with an open heart and mind, the load of grief often becomes lighter – for all of us. In being invited to share our pain, together we take the first step toward healing.”

The essay ends with the Duchess encouraging everyone to “commit to asking others, ‘Are you OK?'” She concluded by writing, “We are adjusting to a new normal where faces are concealed by masks, but it’s forcing us to look into one another’s eyes – sometimes filled with warmth, other times with tears. For the first time, in a long time, as human beings, we are really seeing one another. Are we OK? We will be.”