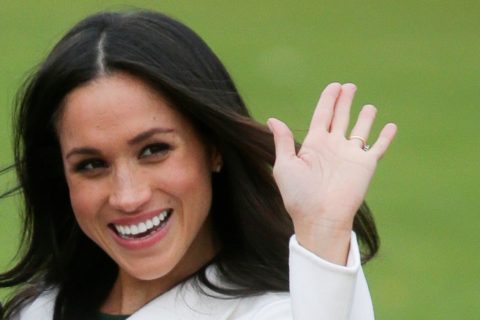 Meghan Markle’s Engagement Outfit Was a Major Shoutout to Canada

Her white coat prompted a Canadian brand's website to crash!

Meghan Markle, honorary Torotontian and future Her Royal Highness Princess Henry of Wales, stepped out with her hubby-to-be at Kensington Palace this morning. The newly engaged couple was all smiles, looking overjoyed as they walked hand in hand to share their happy news with the world.

And the world is, as expected, totally freaking out. Everyone was watching the royal pair, and while most were going goo goo over Prince Harry saying that he knew Markle was the one from “the very first time they met,” we were busy taking note of Markle’s outfit. When it comes to big-moment fashion choices, the American actress has a habit of paying homage to her adopted home of Canada, where she has lived whilst filming Suits for the past several years. From the couple’s first photo to September’s Invictus Games, Markle has been putting Canadian fashion on the map–and into international headlines. Was the royal engagement announcement going to be another major Canadian fashion moment? We hoped so…

And it was! The star of the look was, of course, the engagement ring: a three stone diamond set in yellow gold, embellished with two diamonds that once belonged to Diana, Princess of Wales, and a centre diamond from Botswana, where the couple has spent time together over that past year and a half. But the ring wasn’t the only thing sparkling at the couple’s announcement: Markle supported Canadian fine jewellery brand Birks for the official engagement photocall. The American actress can be seen wearing 18K yellow gold and opal earrings from Birks, which are available at stores across Canada and online at www.maisonbirks.com, for $995.00 .

Markle completed her look–which also featured a green dress from Milanese brand P.A.R.O.S.H. and nude Aquazzura heels which wrapped elegantly around her ankles–with a white wool overcoat from Canadian label, LINE. Markle has been a supporter of the Toronto-based knitwear brand for years, having worn their designs to various public outings, including the 2017 closing ceremonies of the Invictus Games. Harpers Bazaar has reported that the coat caused a surge in visitors to LINE’s website, causing the company’s website to crash temporarily this morning–the LINE coat cost $799, but the Winter White colour seen on Markle is now sold out. The ‘Meghan effect’ has officially arrived, and we’re hoping it’s here to stay.

In an official statement, President and Co-Founder of LINE, John Muscat, said the following:

“We are incredibly honoured that Meghan chose to wear a LINE coat to mark this very special occasion. Meghan has an effortlessly chic sense of style, which we’ve always admired. We know this particular coat is one of her favourite pieces so we have officially decided to name it the ‘Meghan.’ We are elated for Meghan and wish her a lifetime of happiness with Prince Harry.”

Our only question left: will Meghan be wearing Canadian on the real big day? We can suggest a couple Canadian bridal designers if she needs some help…

Photography by DANIEL LEAL-OLIVAS/AFP/Getty Images
Get the best of FASHION in your inbox Thanks for signing up!
The latest fashion, beauty and celeb news delivered right to your email #FASHIONforall Now, check your inbox to complete your subscription
We won’t ever use your email address for anything else
Want even more FASHION? Follow us on social media.