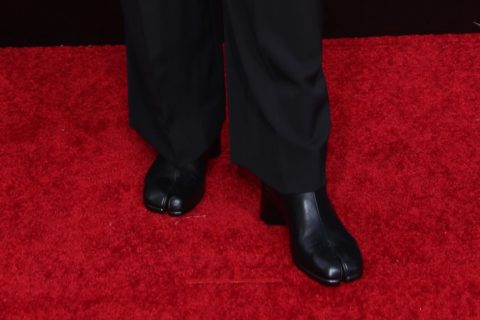 Is the cult shoe launched in 1988 poised to explode in popularity in 2019?

On January 6th 2019, the annual spectacle of the Golden Globes red carpet brought the sheer delight of Pose’s Billy Porter in a pink silk couture cape and Lady Gaga’s dramatic ice blue Valentino gown with a train that required its own attendants, but neither could claim the honour of the most notable look of the evening — it was a pair of boots.

Cody Fern, a 30-year-old actor best known for roles on American Horror Story and House of Cards, arrived sporting a black button-down shirt with mesh paneling and flowy tuxedo pants, neatly abbreviated by shoes bearing a cleft toe: Margiela tabi boots. The next morning, the internet was ablaze with the news of Fern’s boots. Some outlets embarrassingly referred to them as “goat shoes,” and GQ even suggested, “Whether you like it or not, you’re gonna be seeing a whole lot more split-toe boots this year.”

When I noticed Fern’s footwear, my entire body prickled with excitement. Could this Hollywood actor be amongst the small cabal of fashion freaks who lust after the rotating versions of the shoe Margiela releases year after year, of which I am very much a part? (Fern also wore a pair of white tabi boots to a pre-red carpet event two nights earlier, suggesting the answer is an emphatic yes.) Slightly ugly yet wildly compelling, there’s something ritualistic about Margiela tabi boots. The cloven toe calls to mind Baphomet, a half-goat half-human pagan deity, projecting a vague sense the boot’s wearer is no stranger to Satan worship. They’re like no footwear you’ve never seen before and yet at the same time, strikingly familiar.

As it turns out, the most inflammatory shoe of 2019 has actually existed since 1988. (And technically long before that, in the form of traditional Japanese footwear called Jika-tabi, prized by blue-collar workers for their cushiony rubber sole and durability.) As a fledgling designer, Martin Margiela adopted the Japanese split toe concept and used it to create a Frankenstein’s monster of a high-heeled boot that debuted at Margiela’s first-ever runway show. The silhouette was recycled the following season; models in tabi boots stepped in paint leaving cloven-toed footprints on the runway. In pilfering an idea that already existed, Margiela managed to create a visual signifier so distinct it transcended its origins to become a visual hallmark of the brand. Margiela himself once opined that the shape is unique enough to have never been knocked off. (Though when former Margiela employee Demna Gvasalia debuted tabis at Vetements F/W 2018 show, that statement ceased to be accurate.)

Since the style’s inception, the tabi boot has attracted a small but loyal cult following. An Instagram dedicated to curating archival images of tabi boots, @margielatab1, has amassed an audience of 32k followers, rare versions of tabi boots command thousands of dollars on resale sites, and for those who cannot afford the genuine article, there’s tabi boot-shaped candles.

“If you wear them, you feel special,” says Marta De Megni, 37, tabi collector and owner of 519 Boutique in Verona, Italy. De Megni began collecting tabi boots in 1998, and since then has accumulated over 22 of the different styles Margiela releases every year. (Her favourites are a limited-edition spray-painted graffiti pair released in 2012 that are one of only 150 other pairs in the world.) Her current collection sits at 18 pairs after relegating some of the more worn-out pairs to the dustbin, a move she says she sorely regrets. “I’ve always been attracted to [items] that could let me be different from others. That’s why I loved tabi boots at first sight,” she says. “I knew that not everybody could wear them. Personally I think that tabi boots are extremely feminine, even if [others] think [they’re] insane.”

“When you see the split toe, you’re making an aesthetic decision to destroy an otherwise perfectly reasonable silhouette, and I kind of love that. I love when things are just kind of undone,” says Arabelle Sicardi, a writer and tabi lover who chronicled the history of tabi boots for SSENSE in 2018. The design is deceptively simple, initially meant to resemble a bare foot resting on a heel; a feat Margiela may have succeeded at perhaps a little too well. Sicardi suggests part of the shoe’s divisive nature can be explained by the concept of the uncanny valley — the split toe is so lifelike it renders people uncomfortable.

As a former fashion blogger, Sicardi began coveting tabi boots over a decade ago and now counts a collection of three pairs – black with a green Lucite heel, painted red and white. Sicardi describes the boot as a “talisman” that provides a sense of comfort because “[tabis] will always be just unusual enough for me to feel separated from everyone around me.”

Please accept this photo of me taken with a potato, aka my iPhone 6s front facing camera which has only gotten more blurry the more other iPhones come out ? Of course only the tabis are in focus lol

In a sense, tabi boots almost virtue signal weirdness; the crux of their appeal is precisely that not everyone understands them. Those who appreciate the style recognize one another as kindred spirits who possess the ability to comprehend esoteric, hyper-intellectual design objects. According to the curator of @margielatab1, who wishes to remain anonymous, “Those with an artistic eye appreciate outside the norm, and admire [the tabi] for what it is. We believe the Tabi truly needs to be trained to the naked eye.”

So could a shoe ultimately prized for its outsider status — “[They’re] basically the avant grade version of a Chanel bag,” says Sicardi — actually attain the coveted position of 2019’s most hyped shoe?

Alexandre Samson, fashion curator and author of Martin Margiela: The Women’s Collections 1989-2009, thinks not. “Too many people think they’re weird,” he says. “[To wear tabis] you have to be very confident in what you think. It conveys a message of an intellectual way of life. Not a lot of women are ready to wear the tabi boots, because it’s quite difficult to support all these people looking at one’s feet.”

On the other hand, it’s not outside the realm of possibility. Sicardi recounts stumbling on a pair of cheap knockoffs going for $50 while browsing eBay – something they haven’t come across before in an entire decade’s worth of tabi obsession. The existence of knockoffs, first Vetements and now $50 eBay dupes, suggests there’s an increased demand for the shoe.

Regardless of whether tabi boots find a new audience beyond extreme fashion nerds, they will remain one of fashion’s most significant shapes: self-consciously weird, uncomfortably familiar and yet, undeniably beautiful.