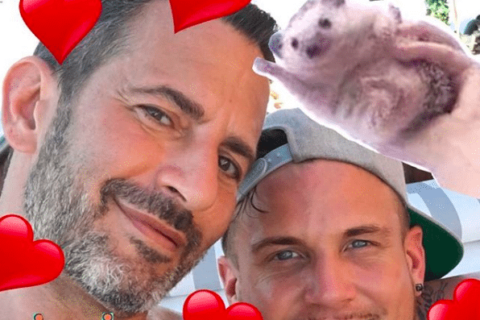 And this happened…”Charly Defrancesco will you marry me”? #flashmobatchipotle #moves THANK YOU everyone for making this happen video @plural_nyc @laurengerrie @seandon212 @1.800.newbold And to my Ride or Die fiancé @chardefrancesco I LOVE YOU❤️

In what was possibly a PR stunt, but most definitely a declaration of eternal love, Marc Jacobs proposed to his fiancé Charly Defrancesco….in a Chipotle…with a flash mob. Jacobs shared a video of a crew of people dancing to “Kiss” by Prince in the beloved burrito chain, with the workers behind the counter dancing along. Defrancesco said yes, of course. Wouldn‘t you when there’s a lifetime of sofritas with extra ahead of you? (Marc Jacobs’ Instagram)

“Vetements does not support wannabe journalism based on lies and gossip”

Last week, HighSnobiety published a piece called “2 Years After They Broke the Internet, It Looks Like Nobody is Buying Vetements.” The article claims that sales are flagging for the once-hype brand, citing anonymous retail buyers and workers who claim the label’s sell-through rate has declined in recent months, and accusing Demna Gvasalia of creative fatigue. A day later, Vetements but back, posting an message in all-caps accusing HighSnobiety of “opportunistic pseudo journalism.” WWD then got buyers who seem to have a more optimistic view of the situation to speak on-the-record about Vetements: Rodolphe Nantas, the head men’s buyer at The Webster says, “[Vetements] sells above the average for all of our brands.” Despite all the claims of fake news, HighSnobiety refuses to retract their story: “The moment a brand like Vetements ends up in larger, more mainstream retailers, it’s a hit to their perceived authenticity. While Vetements is far from dead, to many in the industry — especially the selective market we cater to — it is ‘over,’” they told WWD. (HighSnobiety/WWD)

Adrian Joffe, the CEO and director of Comme des Garçons (and Rei Kawakubo’s husband) announced that the label will be launching another brand that will be available exclusively online. Comme des Garçons already has many diffusion lines, including Play, Noir, Homme, Plus and Shirt, and the new brand will mark the 18th for the label. He announced the news at the grand opening party of the Dover Street Market in Beijing. Joffe added that Kawakubo herself will design the website for the brand. (WWD)

Petra Collins, the fashion darling photographer and Tavi Gevinson acolyte, directed Cardi B’s brand-new music video for “Bartier Cardi.” The video is shot in Collins’ signature hazy, low-lit aesthetic, with the charismatic rapper spending most of her screen time dancing in fur and red lingerie in front of a retro silver tinsel backdrop. There’s also a cheeky product placement bit for Fashion Nova, in the form of a banner that flashes onscreen reading ‘1-800-Fashion Nova.’ (Vogue)

Abloh’s label, Off-White™, has filed a lawsuit against over 160 sellers operating on e-retailer Wish.com for “reportedly selling fake Off-White™ products,” reports HypeBeast. During preliminary injunction, Off-White™ is asking for $2 million in damages for each instance of copyright infringement, claiming that the counterfeit goods have resulted in lost profits and a damaged reputation for the brand. Last year, Abloh sued Paige denim for ripping the label’s diagonal stripe design. The lesson here is: do not cross Virgil Abloh. (HypeBeast)