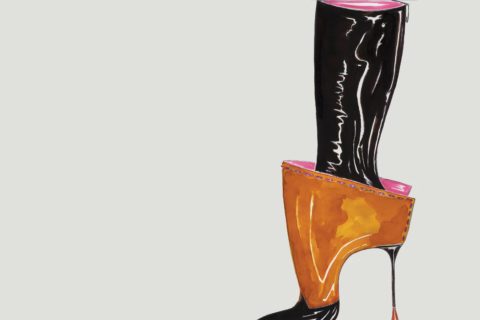 “We have wonderful designers who are just working for big corporations. Before, we used to be a métier. Now, it’s a money machine.”

“I had a divine shoe today,” says legendary footwear designer Manolo Blahnik, talking about his work as if it were a spectacular meal. Blahnik is on the phone from outside Milan, where he’s visiting a factory that is working on an upcoming collection. He tells me that it’s the first clear day after a long stretch of rain and that from where he’s sitting, he can see Monte Rosa, a massif containing the second-highest peak in the Alps. I feel like I’m on a journey, chatting with an amazing seatmate.

But back to the shoe: “It’s very surrealistic,” Blahnik continues, describing (at my request) the best shoe he worked on that day. “Maybe a cross between the buildings of Alvar Aalto and the colours of [pause]…mud.” Aalto is the late Finnish architect who has been “gone for many moons” (he died in 1976) but continues to inspire the 75-year-old designer to this day.

Architecture has often played a role in Blahnik’s work (there were traces of Josef Hoffmann in his Fall 2017 collection), but that is just a fraction of what goes in and out of this wildly creative mind after more than 45 years in shoe design.

It’s also one of the many reasons why Blahnik is ripe for the career retrospective Manolo Blahnik: The Art of Shoes, which opens today at Toronto’s Bata Shoe Museum. Guest curator Cristina Carrillo de Albornoz selected almost 200 pairs of shoes and 80 original drawings, including the looks Blahnik created for director Sofia Coppola’s 2006 fashion feast Marie Antoinette. Ideally, this exhibition will grant a glimpse into the designer’s journey from a privileged upbringing on Spain’s remote Canary Islands to being one of the most iconic brands in the world. Blahnik will open the exhibit.

“It’s one of the great mysteries of my life,” says Blahnik of his career path. “I was at the University of Geneva studying law. I considered doing a second semester but thought, ‘I can’t do that.’ I jumped to literature, which was my first love. Then, somehow I thought, ‘Why should I study literature or the pages of books from a teacher?’” Next, he began doing fashion illustrations, eventually spending time in New York with his friend Paloma Picasso, who connected him with the late, great Vogue editor, Diana Vreeland, so she could see his pictures. “Mrs. Vreeland said to me, ‘Get into shoes.’ And here I am!”

Since then, Blahnik has become synonymous with heels—high ones—that are handmade and painstakingly ladylike. He still carves the wooden forms for the shoes he makes, and long before Sex and the City made him interstellar famous for being Carrie Bradshaw’s proverbial Achilles heel, Blahnik dressed the jetset elite. (Bianca Jagger famously wore Blahnik heels the night she rode around Studio 54 on a white horse.) If the man himself was initially overwhelmed by his Sex and the City fame, he now reflects on the ’90s and early aughts with absolute fondness.

“That period—the ’80s and ’90s and the beginning of the century—was a really important time for fashion,” he says. “Now, fashion is diluted. It’s very confused. We have wonderful designers who are just working for big corporations. Before, we used to be a métier. Now, it’s a money machine.”

That’s not to say Blahnik has given up on the next generation of footwear designers. He cites Pierre Hardy, Benoit Méléard and Giannico as footwear lines that impress him but, thankfully, shows zero signs of slowing down himself. When asked what collection he is most proud of, he declares, “Maybe the next one!”