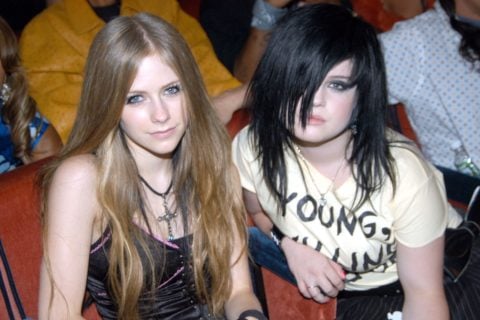 What Does the Mall Goth Nostalgia Trend Really Mean?

In 2003, I was a moody, angsty teen with a special fondness for black nail polish, caked-on eyeliner and angry guitar music with lyrics characterized by a series of anguished, indistinguishable yelps. I wasn’t the only awkward loner out there, but I took special pride in labelling myself a nonconformist and asserted that distinction through a pair of bondage pants laden with silver hardware. The pants were a manifestation of my attitude at large: Look aggressively weird so that people leave you alone. They had D-rings in counter­intui­tive places and more zippers than humanly necessary, and they jangled when I walked, announcing my presence with a sound that was decidedly more polka than punk rock. I was, in essence, a mall goth.

For those of you who aren’t familiar with the term, “mall goth” was a style of dress that combined the hallmarks of punk, goth and metal subcultures and thrived like bacteria in the petri dish of the early 2000s. Though it tends to be slung as pejorative—Urban Dictionary describes “mall goth” as “a pathetic excuse for real gothic”—it’s a term I find deeply nostalgic because it conjures the heyday of Hot Topic: the premier purveyor of The Nightmare Before Christmas T-shirts, studded wrist cuffs and those jelly bracelets that sparked a brief furor when a news story circulated linking the colour of each bracelet to a different sex act. Plus, it’s the most accurate term I can come up with to describe the definitively angsty clothes currently enjoying a resurgence in fashion.

Earlier this year, while innocently scrolling through Instagram, I nearly had a conniption when I noticed that Opening Ceremony is now hawking lug-soled platform New Rock shoes, the kind once favoured by cybergoths who knitted their own synthetic neon dreadlocks, as well as bondage pants by the Tokyo-based Harajuku brand M.Y.O.B NYC. A representative for M.Y.O.B NYC told me, “Receiving an email alone from OC took us by surprise, so we were utterly shocked when they came to the store and told us on the spot that they wanted to stock our clothes at OC.” They’re not the only ones. 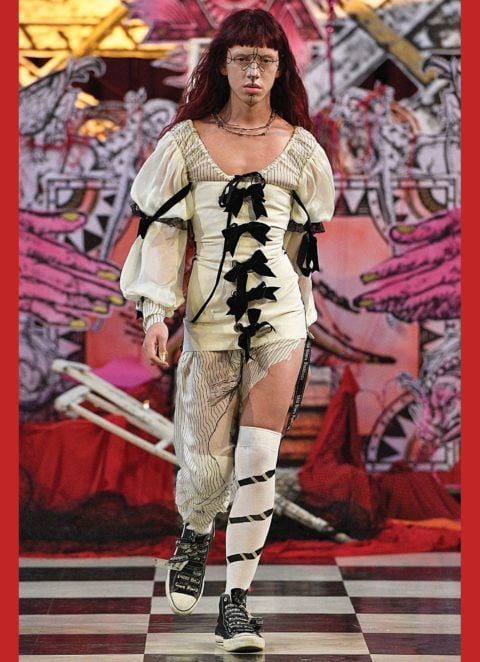 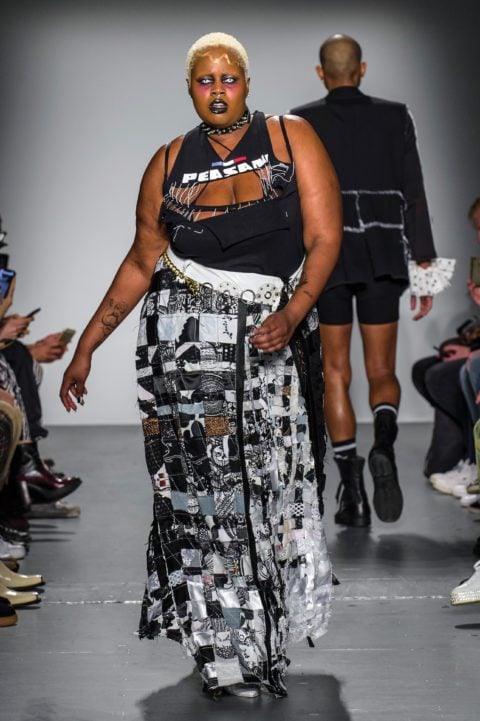 Perhaps the most visible moment of the mall goth revival was when rapper Lil Uzi Vert cemented his sadboi persona by appearing at the 2018 Grammy Awards wearing a pair of Tripp NYC bondage pants bedecked with multiple rattling wallet chains—my heart swelled with an almost motherly sense of pride. During my own bondage-pants years, I was desperately unpopular and adopted a freakish style of dress as my armour against the world. Now, I felt triumphant that the self-imposed uniform of freaks and misfits is being embraced as just another way to express yourself.

If the reigning message of mall goth is to let one’s freak flag fly, then its revival suggests that former outcasts are banding together to reclaim their own disenfranchisement. We’re living in a watershed moment for inclusivity and diversity, and more people have a seat at the decision-making table thanks to activist movements like #MeToo and Black Lives Matter. As the cultural gatekeepers begin to let difference filter through, it appears that more people are willing to send the sartorial message that, deep down, we’re all a little bit freaky.

Liisa Ladouceur, author of Encyclopedia Gothica and a bona fide goth expert, notes that “more than some of the other types of goth, [mall goth] is very gender neutral. It was an oversized shirt and it was baggy pants, and everyone was wearing it.” The androgyny of mall goth meshes well with Gen Z’s openness to gender identities outside the binary. A 2015 study by trend forecasting agency J. Walter Thompson Intelligence’s Innovation Group found that over a third of survey respondents aged 13 to 20 strongly agreed that gender did not define them as a person.

One such non-binary teen is Aaron Philip, a 17-year-old trans model with 12K Instagram followers who facetiously refers to herself as an “elf cyborg babygirl.” Philip, who uses a wheelchair, often dons spiky dog collars and camo-print shirts and cites Lindsay Lohan in Freaky Friday as a style inspiration. Philip doesn’t identify as a mall goth but says her style is “very Internet,” suggesting that people who gravitate to this kind of dress do so out of an affinity for online culture rather than music. As a black trans femme, Philip speaks to why the revival of mall goth is doing so much better with racial diversity compared to the early 2000s, when the subculture’s largest demographic consisted of angry suburban white teens: “That edgy kind of feel resonates, [but] a lot of people thought they weren’t allowed to be goth because they only knew it as a white thing,” she says. “I think it just needed a push from someone with a platform, like Lil Uzi, to show these kids that you’re allowed to do it.”

My own interest in mall goth was short-lived: It faded when I realized it wasn’t my destiny to marry Joel Madden of Good Charlotte. But my love for studded wrist cuffs never disappeared; it simply blossomed into a lifelong interest in alternative culture. Mall goth was my gateway drug from accessible pop punk like Sum 41 to the slightly more challenging strains of Fugazi and Bikini Kill.

To have the styles of your youth come back in fashion is a rite of passage of aging; I knew it would come, but I had no idea how hard it would hit me when it did. Since I began writing this piece a month ago, I’ve spent more time stalking the current offerings on the Hot Topic website and listening to a Spotify playlist called “Pop Punk Perfection” than should legally be allowed for someone pushing 30. While I’m not about to shell out for another pair of bondage pants, this temporary regression is nostalgia at its best: briefly escaping the burdens of adulthood by wallowing in a time of heady innocence.