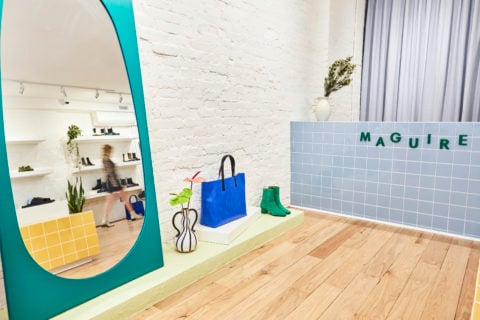 Including the adidas x Gucci collab and CHERSACE.

Maguire heads to the Big Apple

To celebrate its five year anniversary, Canadian footwear brand Maguire has opened its first-ever international store in New York City. Sitting on Elizabeth Street in the Nolita neighbourhood and just a short walk from SoHo, the 1000 square foot boutique is tucked between a handful of trendy restaurants and cafes, and neighbours a variety of other direct-to-consumer brands, such as Everlane, Sézanne and Mejuri.

Even after the success of their brick-and-mortar locations in Montreal and Toronto, Myriam and Romy Maguire, sisters and founders of the ethically-produced brand, were surprised to be able to open in NYC so quickly. “It was always a dream to one day open a store in this city,” they told FASHION. “We never imagined we could do it on our own, being independent and still a relatively small company with no big capital backing us! The pandemic brought a significant decrease in commercial rents in New York and when we saw this, we decided to jump on the opportunity even though there were many uncertainties at the time.”

The New York City store opening isn’t the only achievement the Maguire sisters have to celebrate this summer. They’ve recently released their newest collection of fashion forward shoes, colourful handbags and, for the first time ever, sunglasses. The limited edition shades come in five different colour variations and only one style, the ‘Bai.’ Named after a friend of Myriam’s who introduced her to the idea of creating sunglasses made from recycled plastics, these shades are the trendiest way to look toward a brighter future.

The highly anticipated adidas x Gucci collection is finally here. The two brands have joined forces to reimagine Adidas classics with a groovy Gucci twist. From gazelle sneakers emblazoned with the double G monogram to retro-looking tracksuits, this kaleidoscope collection has a bit of everything for both men and women. The line is available at designated Gucci stores, online and through a selection of ephemeral Gucci Pop-Ups, where the spaces are decorated with the geometric prints found in the offering.

To welcome its newest collection and to illustrate the fact that creativity emerges from countless perspectives, a group of 12 artists have been invited to express their individual working practices inspired by the Alexander McQueen Autumn/Winter 2022 women’s pre-collection: PROCESS. Each artist has chosen a look from the collection and conceived a work of art through their preferred medium, which will result in a temporary installation that showcases the ways in which art and fashion interact. The artwork will be displayed alongside the McQueen piece it relates to.

Canadian lifestyle brand Trouvaille has launched its newest collection of fashion and decor essentials for T.Line by Trouvaille. Embracing effortless summer living, Edition No. 002 offers classic pieces like a breezy lounge dress, an off-the-shoulder blouse and gold statement earrings. The collection is inspired by warm weather-ready silhouettes and is the perfect blend of elegance and ease. Prices range from $25 to $325.

Canadian shoe legend John Fluevog and iconic textile designer Zandra Rhodes have joined forces on a capsule collection that includes five new styles in totally original colourways. Some of the new patterns include Wiggle Flower, Stripy Wiggle and Swirly Wiggle Flowers, adapted from some of Zandra’s textile designs that date back to the ’60s. The fun, zany pieces launched June 10.

Cher and Versace team up for a Pride collection

To celebrate Pride month, pop icon Cher has united with Donatella Versace to create a limited capsule collection appropriately titled CHERSACE. The coming together of the two icons has resulted in a line that consists of rainbow emblazoned and bedazzled black t-shirts, embroidered logo socks and logo baseball caps decorated with both Cher and Donatella’s signatures. A portion of the proceeds from the collection, which launched on June 7, will go to Gender Spectrum, a charity committed to the health and well-being of gender-diverse youth and their communities.

Photography courtesy of Maguire
Get the best of FASHION in your inbox Thanks for signing up!
The latest fashion, beauty and celeb news delivered right to your email #FASHIONforall Now, check your inbox to complete your subscription
We won’t ever use your email address for anything else
Want even more FASHION? Follow us on social media.