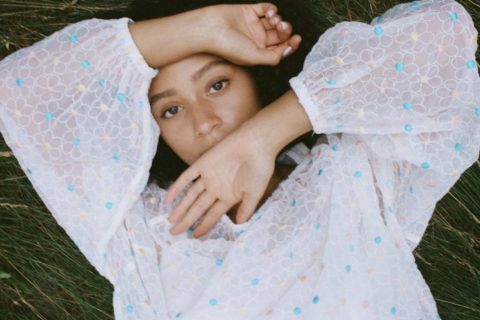 For Toronto-based creative Sarah Gregg Millman, there’s satisfaction to be derived from taking things slowly. The costume designer and stylist launched her line, Local Woman, at the beginning of this year after encouragement poured in from an unlikely source; and her approach is the opposite of what you’d expect in today’s ‘hustle culture’ climate.

“I’d worked in film long enough to know I wanted to be a director,” Millman recalls of embarking on her career shift. “I wanted to be at the helm.” After hiring a life coach–who noted that the topic of fashion kept cropping up during their conversations–Millman forged ahead with the production of a self-funded short film, the release of which has been put on hold indefinitely due to COVID-19.

Given her previous experience and limited budget, Millman took it upon herself to design a dress for the main character, who is pregnant; a whimsical, movement-minded piece that immediately caught the eye of those she showed the film to. “They were like, the film is great…but that dress!”

Spurred on by the compliments, and finding herself with the time given all film productions had ground to a halt, Millman decided to create the style in an array of locally-sourced upcycled and deadstock fabrics, some dating back decades. After a successful pop-up sale and sporadic online drops, she’s gained a legion of avid fans always on the lookout for restocks of the romantic designs, many of which are named after the first customer to purchase them; others are named for icons like musician Nina Simone.

At 2pm EST today, Millman will release a new limited number of variations on the popular look, ranging from a velvety “fall feeling” style, to pieces she calls “the confection collection” for their saccharine motifs. “I’m very fabric driven,” Millman notes–not surprising given her background as a visual artist. And she says that moving forward, she’d love to incorporate more artistic aspects to the Local Woman brand, including a journal focused on women who have built their own houses, as well as a video component.

For now, though, she’s focused on growing Local Woman’s offerings–an apron-style dress and a jacket are currently in the works–and ensuring that her brand maintains its feminist roots. “I would like to grow it to a more democratic space of who can wear it and access it,” Millman adds, noting that right now her customers skew on the younger side. Given what she’s accomplished so far, it’s only a matter of time.