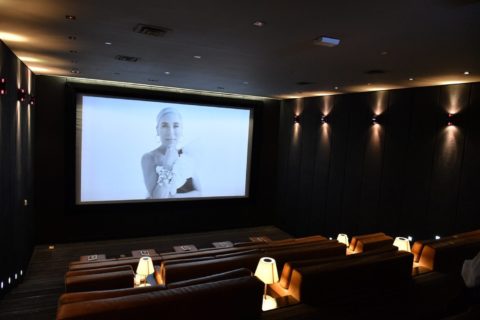 This Fashion Insider Has Launched Her Own Accessories Line

Taking the elevator down into the Hazelton Hotel screening room helps explain how cool Lisa Corbo is. I’ve never been in this room, didn’t know it existed, and with its intimate VIP-style leather club chairs, I feel like I’m in on a local secret. Where better to launch Lisa Corbo Design?

In person Lisa Corbo seems bemused, and thrilled at how her life has come full-circle. The Australian-born Toronto resident is a fashion veteran adept at wearing multiple chic hats. Over the years she has been a designer, a buyer, a boutique co-owner, a stylist and, most recently, an influencer. Thanks to Instagram a new generation of women are starting to become familiar with Corbo’s brand of “fabulous.”

And there was much fabulousness to be found at the Hazleton this week, where Corbo and her daughter Sofia, officially launched a capsule collection of accessories now available online.

“I’ve worked so many aspects of fashion,” said Corbo, sitting in the screening room. The venue was selected so guests could view a video starring Corbo, filmed by photographer Kayla Rocca. Most know Corbo as co-owner of George C, the meticulously curated Yorkville boutique she runs with her husband George, however, this new venture is a separate project that the designer and her daughter Sofia (below) plan to take beyond the 416.

“I’m a creative person, so retail was interesting to me because I was able to edit and curate and work with designers before they become brands, which is my passion,” said Corbo, immaculately dressed in an off-shoulder Cushnie et Ochs top; flared and frayed jeans by Sarah Bataglia and No21 gingham platforms. “But it wasn’t enough, and I have a daughter, Sofia, and I was wondering what could we do together.”

The two decided to start with accessories. It was a category Corbo has been dabbling in since 2006, it’s also where she could see the most immediate need. “People were stopping me for my accessories, and the accessories were an extension of something I couldn’t find when I was styling my clients.” Carbo explains that her clients had their Chanels and their Lanvins but “where was the accessory that wasn’t going to break the bank and you could travel with?”

The 20-piece capsule collection ranges from delicate star burst earrings, to chunky chain-link chokers and stackable rings. Designed entirely in Toronto, all items are made in Italy from ottone-brass with 18K gold plating. Lisa Corbo Design prices start at $150 and peak at $1,350.

It’s a fun time for Corbo who admits to being flattered and surprised at the attention she finds via social media with her #fashionthatleadsnotfollow hash tag.

“I thought my demo would be a little older but my biggest followers are 20 to 25, and they are the girls that are messaging me. I think they like that I’m encouraging them to be themselves.”

“I’m a bit of a chameleon. I don’t like to be defined by a certain style. To me it’s about being fabulous. Fabulous can be dainty and it can be loud,” says Corbo. “Fabulous is who you are.”