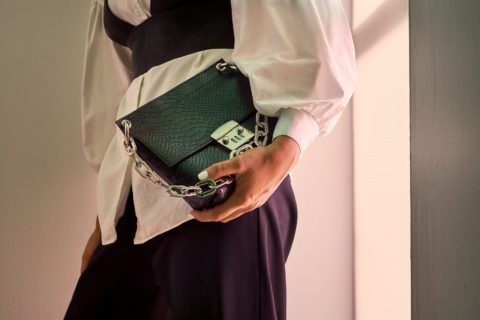 Since its introduction in 2014, Sonya Lee — the brand founded by Stephanie Ibbitson, who recently relocated to Vancouver from Toronto — has become known for its sleek modern handbags and accessories featuring elements like metal chains. Crafted from leather that’s a by-product of the food industry and primarily sourced in North America (and all but one type of leather used is biodegradable), the materials Ibbitson works with aren’t inexpensive—as most high-quality things aren’t. But at a time when many of her friends and others around the world are being laid off or finding their work hours reduced, Ibbitson realized there was a need to create the kind of exceptional product she specializes in at a lower price point.

“I was talking to my mum and my grandpa in March,” she recalls. “And he mentioned how during the depression, he remembers his mum not being able to afford certain things but she would still want to feel special.” Ibbitson set out to translate some of her most cherished styles in half-sizes, allowing customers to treat themselves to a piece that would quickly become a wardrobe staple without overextending their budget.

The Half Rosa — named after Rosa Halpern, founder of the Toronto-based leather jacket brand Namesake — is a take on Sonya Lee’s covetable boxy backpack, and the Half Jess is a petite belt bag that’s perfect for essential-getting outings. Ibbitson has also introduced a selection of styles priced around $200, like the new scrunchie-inspired Leighton bag. “I thought about what’s possible and what’s affordable, and then met in middle,” she says of the new and updated designs. She’s also in the process of setting up a partial payment system so interested customers can purchase a piece and pay it off in instalments. “I’m basically trying to be recession-proof,” she says.

During her time in quarantine, Ibbitson has found herself interacting with customers more often, to figure out what else they want when it comes to her designs. “How many times have you seen a brand and thought, if they just made that belt in gold, I would buy it,” she says, highlighting that she recently added a new belt style to her collection based on a few customer requests.

This kind of flexibility has always been key to success in the design world, but so has positive thinking—and Ibbitson’s taken on a habit that’s proved extremely helpful in these fraught times. “This is very woo woo and something I never did before moving to Vancouver, but my mum said ‘Please, start doing this because it will actually help you’,” she says. “I look at myself in the mirror every morning and say to myself, what am I out to create today? You’re strong, you’re powerful, you’re intelligent—you’re going to make an amazing bag today. It felt really cheesy and weird the first couple of times I did it, but I find it really sets my intentions and a vibe for the rest of the day.”