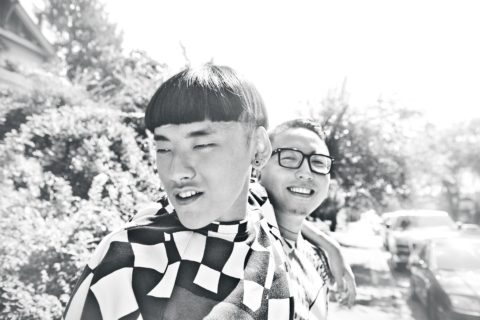 Laurence Li and Chico Wang are fashioning a psychedelic world out of daily life.

“I think we’re very literal,” says Laurence Li of Laurence & Chico, his label with partner Chico Wang.  “A lot of brands…when they talk about inspiration, it’s more theory based, but we’re very direct,” he says over the phone from their atelier in Shenzhen, China. He cites their debut Spring 2016 collection as primary evidence. “We were inspired by our trip to the aquarium.”

The aquarium that inspired jellyfish prints and squidlike iridescent fabrics is in Vancouver, where Li was raised, he and Wang got married in 2014 and they established the brand in 2015. But the Big Apple is really what started it all. “We met on a dating app,” says Li, laughing. “I was travelling in New York on vacation. Then I decided to move there.” Raised in Inner Mongolia, Wang was already living there, by way of Beijing, after winning China’s version of Project Runway landed him a fashion design scholarship to Parsons The New School. Li, who had studied animation at Vancouver’s Emily Carr University, enrolled, too, but opted for fashion marketing. Finding his coursework relatively easy, he used his free time to draw illustrations of their daily life—the first one depicting them grocery shopping. Wang saw an opportunity, so Li drew more illustrations and printed them on postcards, which they sold in front of the old J.Crew store in SoHo. They made more than $1,000 the first day.

The postcards turned into T-shirts, sweatshirts and scarves. When stockists, such as Kokko in Richmond, B.C., picked them up, Li and Wang dropped out of school and launched their brand. Li’s illustrations provided the inspiration for Wang’s designs for their first collection, aQuarium, and have done for every one since. For their Fall 2018 collection, titled “Doudou,” a French word for security blanket, they envisioned their furniture as pets. “Groom me” or “Feed me” is emblazoned on hats and some tops. “In our world, pets don’t shit; they’re very high-class,” says Li. But they have woven a deeper tale. “We drew a story about how the pet is living in its environment and how we tamed it,” says Li. “Later, it found another pet and mated, died and released eggs. We put the eggs everywhere in the world, and, depending on the environment, they hatched into different forms.”

Actual furniture was born out of the collection, and it’s featured and purchasable at the namesake café Li and Wang opened in downtown Vancouver this past June. Beaded and shaggy with unicorn horns, the canopy chairs are another brand extension. There are currently only six of these chairs, but 10 more are coming. “It will look like the monsters are having a meeting,” says Li. Aware that their clothing isn’t everyone’s cup of tea (which they serve, along with coffee and pastries), they see the café as a way to invite people into their wild world.

A $3 cup of coffee is their most accessible entry point, but the pair considers costs across the board. While there’s a $2,200 quilted denim coat embroid­ered with hundreds of criss-crossing pearls, there’s also a $78 T-shirt and a handful of accessories under $200. “We have [staff] write down their perceptive price,” says Li. “Of course, we have to calculate costs, and there’s a system to that, but we do think of affordability as key to our brand.” On the design side, he says that fabric manipulation, weaving and bold colours and prints are their trademarks. “Also, the surprise element—we don’t want people to get bored.”

Photography Courtesy of Laurence and Chico
Get the best of FASHION in your inbox Thanks for signing up!
The latest fashion, beauty and celeb news delivered right to your email #FASHIONforall Now, check your inbox to complete your subscription
We won’t ever use your email address for anything else
Want even more FASHION? Follow us on social media.