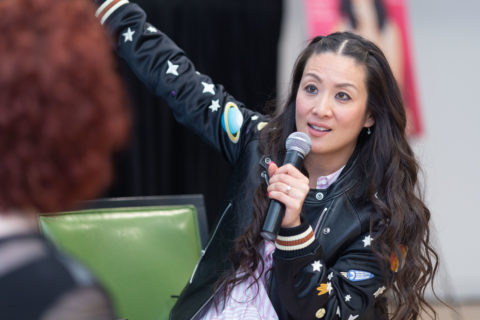 “The truth is, no matter your gender, sex, whatever, everyone gossips."

This is the second instalment in Life Lessons, a new series encompassing interviews with figures in the fashion industry whose success we admire and can learn from.

Elaine ‘Lainey’ Lui is Canada’s go-to TV personality, reporter, gossip columnist and overall industry high-flyer. The Toronto native shot to stardom after the creation of her blog, Lainey Gossip, over 10 years ago. Now, as an ETALK Senior Correspondent and co-host of CTV’s THE SOCIAL, alongside her stint as blogger extraordinaire, not even the worst bout of rush hour traffic could slow her down. We caught up with Lui at the Bayview Village X WeddingBells month-long “I Do I Do I Do” pop-up (tickets purchased here) to discuss all things gossip. With a cocktail in hand, Lui dove into the cultural necessity of gossip, how gossip can counter ignorance and more. These are life lessons, as told by Elaine “Lainey” Lui.

On why we, as a society, love to gossip

“It is innate in humans to communicate, and gossip is a form of communication. It’s a way for an organized society to establish standards of behaviour. I do think it’s taken a while to appreciate what the value of gossip is because it has historically been feminized and anything that’s feminized in our culture is deemed invaluable. But the truth is, no matter your gender, sex, whatever, everyone gossips.”

On how she differentiates Lainey Gossip from other gossip websites

“For Lainey Gossip, we like our content to be entertainment. It’s not entertaining to me to follow every beat of a story surrounding someone’s death or a gross lawsuit. TMZ, fine, they’re really giving you the bone-by-bone coverage, but we like it to be entertaining. That doesn’t mean that it can’t be serious and while entertaining you we can’t be unpacking and attacking some serious subjects, like getting people to think about inequality, art and culture. In general though, I try to stay away from the grody stuff.”

On the importance of listening

“To be a great gossip columnist, people think you’re talking a lot, but really the skill is to listen. It’s kind of misleading to think that a gossip is somebody who’s chirping all the time. The way you actually gossip is to collect [information].”

“Over the course of my travels, I’ve developed contacts. For example, you and I could be contacts now and going forward I might call you about a tip I hear on the fashion scene. You never know. I think we build contacts naturally and in my field, when you build contacts you do it for context. You’re not always reaching out to your contacts for breaking news. You’re like “what do you think of this, this is what I heard, is this possible?” It’s not dissimilar to what journalists in other fields do.”

On her biggest success story

“At the beginning of my career, I was best known for my coverage when Brad Pitt and Angelina Jolie decided to have their baby Shiloh in Namibia. I had reported that they had chosen the African continent for the birthplace of their child a solid three months before anybody else had gotten a hold of it. That was an early story, and I’m not really that interested in breaking stories anymore. The landscape of celebrity coverage has changed, [famous people] break their own stories on Instagram now.”

On banishing ignorance via gossip

“I just want you, before you go off and gossip with your book club or Friday night drinking club, to not have an ignorant point of view where gossip is concerned.”

“I’m a 45 year old person, so I’ve been around long enough to have been an adult before everybody got “woke.” Did I do shitty things? Yes. Have I said shitty things? 100%. I was raised in a Western white supremacist society, of course I’ve been conditioned to think a certain way. I have to unlearn it. My point is you have to give yourself space to unlearn things and you might want to give other people space to unlearn things as well.”

“I’m a really bad person to ask for advice. I don’t know that I can give any advice that’s better than Michelle Obama. Just go and read Michelle Obama’s book.”