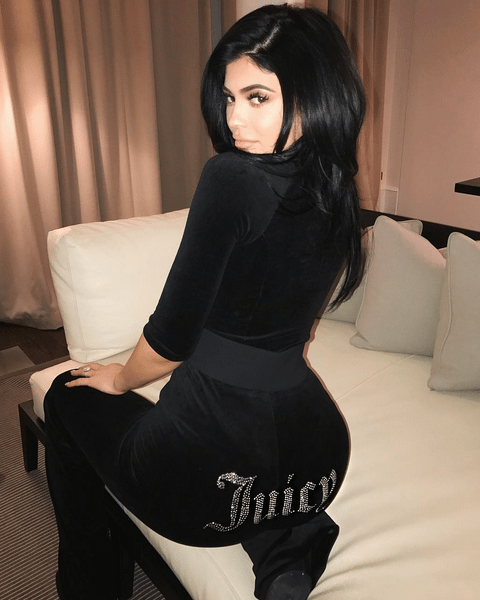 Leave it to a KarJenner to bring back a trend that took Hollywood (and the world) by storm in the early 2000s: the Juicy Couture tracksuit. The 19-year-old Lip Kit CEO recently posted a few photos on her Instagram account wearing navy velour track pants with the word “Juicy” scrawled in Swarovski crystals across her backside.

The throwback look is part of Vetements’ spring 2017 collection, which debuted during Paris couture week in July 2016. Created in collaboration with Juicy Couture, designer Demna Gvasalia showed the reworked velour pieces alongside a handful of other deconstructed commercial fashion brand looks, including Levi’s and Canada Goose. “The idea was always to take the iconic, the most recognizable product from their brand and put it into a Vetements frame, whether in terms of shape or construction,” Gvasalia told New York magazine before the show. The brand’s updated version of the iconic Juicy tracksuit includes a higher waist and a slimmer fit.

Juicy Couture tracksuits were THE hottest thing in the early aughts, every It girl (Britney Spears, Jessica Simpson, J.Lo) had one—or 10! Paris Hilton was the head of the luxe loungewear squad; she had them in every colour—but pink was her signature.

Kim Kardashian was a major Juicy girl, too. “When I look back at old photos, I can’t believe the outfits I used to wear. I was SO obsessed with those classic Juicy Couture tracksuits a few years ago, and had them in every colour. I still have all of mine, I can’t let them go LOL,” she wrote in a style post on her app in 2016. The post includes amazing throwback pics of Kim in her Juicy Couture—you know, just casually lying on a Range Rover.

JUICY COUTURE TRACKSUITS GIVE ME LIFE!!!!! Check out my collection on my app! #AllPinkEverything #2007 #MajorClothAlert

Now’s the perfect time to haul out your much-loved (c’mon admit it!) Juicy Couture tracksuit from the back of your closet. (We will if you will!) We are officially declaring that 2017 is the year of the throwback logo. So throw on your velour leaisurewear with crystal-encrusted bottoms, then turn around and give us your best Kylie Jenner.