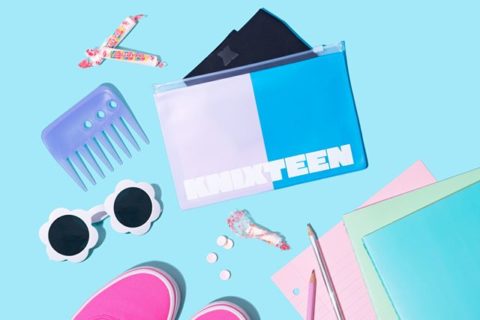 Knixwear’s Groundbreaking Bras Will Soon Be Available for Teens, and You Can Help Design Them

If you’re anything like me, your first step upon arriving home is unclipping your bra and throwing it far, far away. Knixwear is a brand out to challenge that steadfast routine. Made from comfortable performance fabric with seamless straps and – hallelujah! – no underwire, it’s easy to forget that you’re even wearing a bra in the first place.

The Canadian company, which launched in 2013, expanded in 2017 to include a new line made especially for teens. Knixteen, which up until now has only carried underwear, announced last week that they would also be recreating Knixwear’s iconic bras, made specifically with teens in mind.

I say iconic because founder Joanna Griffiths’ 8-in-1 Evolution Bra holds the record for the most-funded fashion project in Kickstarter history — $1.5 million. The bra was a game-changer, an undergarment for any occasion and any woman. And now, Griffiths is opening this product up to the teen demographic too.

"Supportive without being stiff, comfortable without being flimsy. No pinching or digging in weird spots. No frills, perfectly minimal.” Ericka G. The 8-in-1 Evolution Bra. Get the scoop in our stories now. ✨

These bras won’t completely mirror their mature counterparts, however. Five fresh new fits will be released, one each month, starting this August and continuing right up until Christmas. Each bra has a dedicated BraBoss designer and these creators know exactly what their customers want. Why? Because they’re being made for teens, by teens.

Griffiths enlisted the help of five young style curators for the project, each one representing a unique look and feel. She wanted a group of trailblazers who shared the same values as the company. “They each have a strong sense of self, what they stand for and what they want from their lives,” says Griffiths about the five young women. “Most importantly, they have all set out to empower those around them.”

The designers include Jazz Jennings, a trans teen and LGBT rights activist; Jessica Universe, who self-published her own book of poetry while simultaneously creating her own publishing label; Mo’ne Davis, an incredible athlete whose pitching skills landed her team a win at the Little League World Series; Fiona Frills, a social media influencer using her platform to speak out against bullying; and Bailee Madison, an accomplished actress who started a movement with her #ImMoreThanAWord project.

These teens represent a group of role models advocating for positive change and self-love. “People love you for who you are,” says Mo’ne Davis, who wants the bra she’s designing to empower young women and make them feel good in their own skin. She’s excited that this project allows her to connect with so many other girls. “With what’s going on in the world, it’s good for women to support women.”

Davis is a former Little League Baseball pitcher who was one of only two girls to play in the 2014 Little League World Series. She was also the first girl to earn a win for the event and the first girl ever to pitch a shutout in the history of the series. Sports Illustrated put her on the cover in 2014, giving a whole new meaning to the term ‘throw like a girl’.

These five teens all have supportive fan bases and they’re reaching out to their followers for help. Anyone can go on the Knixteen website and give feedback on their designs. The company wants teens to reach out and say what the perfect bra looks like to them and these responses will be incorporated into the final products.  “It is important to us that their input is at the center of the process,” says Griffiths. “This allows us to create five bras that are true to what teens want.”

Logging onto the Knixwear website, you’re met with countless photographs of real customers modeling intimates and confident smiles. “Let’s talk about us,” a quote on the site reads. “All of us.” Knixwear has always emphasized the importance of inclusivity, and with five unique designs from five inspiring women on the way, it looks like Knixteen will be no different.

We have ‼️BIG NEWS‼️ In 2017, we made underwear better for you by creating our ‘Oh-No’ Proof Underwear. Now, we’re taking on another product that could use some serious innovation: teen bras. ? To create this bra, we need your help! Click the link in our bio to fill out our bra survey. Tell us what your dream bra looks like and watch your design ideas come to life! By filling out our survey, you’ll also be entered to win a $100 Knixteen gift card! ? #BraBoss