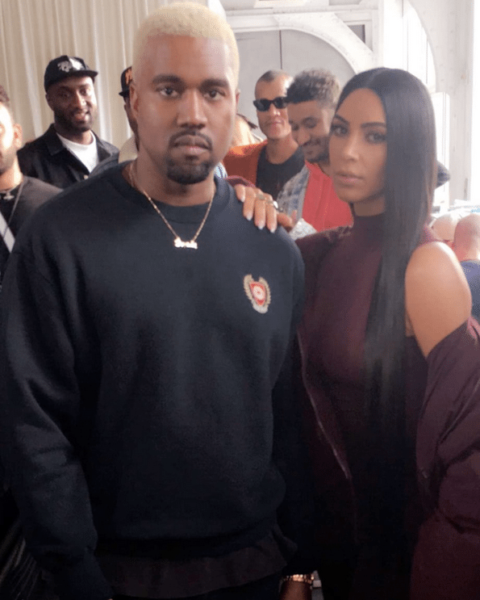 Valentine’s Day may have come and gone, but love is in the air at New York Fashion Week. Kim Kardashian and Kanye West have dealt with divorce rumours over the past few months, but yesterday they looked like a very happy couple.

Kardashian flew to New York earlier this week to attend her husband’s highly anticipated Yeezy Season 5 fashion show. On Tuesday evening, the famous Mr. and Mrs. headed out on the town for a loved-up Valentine’s Day date.

West debuted his latest Yeezy collection yesterday at a top secret show at Pier 59 Studios in New York. It was so exclusive that many members of the media were denied entry. The guests in attendance were mostly fashion buyers and West’s friends and family—the later included Kardashian’s sister Kylie Jenner and her boyfriend Tyga.

Kim made her grand entrance wearing a look from the brand’s fall 2017 collection, which included a bomber jacket, a bodysuit (she wore it sans bra), athleisure track pants and lace-up stiletto boots. (Burgundy is a favourite hue of the KarJenners). Her Cher-length hair (a.k.a. her new signature) was stick straight and centre parted.

West’s fall 2017 Yeezy collection was a lot more low-key than last season’s show, but that didn’t mean it was dull. West loves a grand spectacle, and this time around he opted to present his collection via giant live video projections, before the models’ finale walk. High-rise denim, a new running shoe featuring a chunkier sole than the brand’s much-loved Boost 350s, and slouchy stiletto thigh-high boots were just a few of the highlights. Kardashian posted a video of the finale on Snapchat.

She also tweeted out a sweet message to her 39-year-old rapper hubby, congratulating him on his “amazing” fashion show.

So proud of my baby for his amazing show today! It was so good! I'm so SO proud of him!!! #yeezyseason5

Besides Kim K and crew, the front row was packed with other mega stars including Zoe Kravitz, Hailey Baldwin and La La Anthony. The latter two sat together at the show and Anthony posted a shot on Instagram. “Whatever or whoever we were talking about must have been good @haileybaldwin ??Yeezy fashion show was ??????????????,” she captioned it.

Whatever or whoever we were talking about must have been good @haileybaldwin ??Yeezy fashion show was ??????????????

After the show, the Kardashian-West clan and a group of friends celebrated with take-out McDonald’s fries, burgers and and chicken nuggets. Best of all? The delivery girls were none other than models-of-the-moment Kendall Jenner (Kardashian’s sister) and Bella Hadid. Kim shared a video of them arriving with bags of fast food from the Golden Arches. “Look at these delivery girls, they’re so cute,” she says. Jenner was unable to attend West’s show because she was walking the runway at Anna Sui.