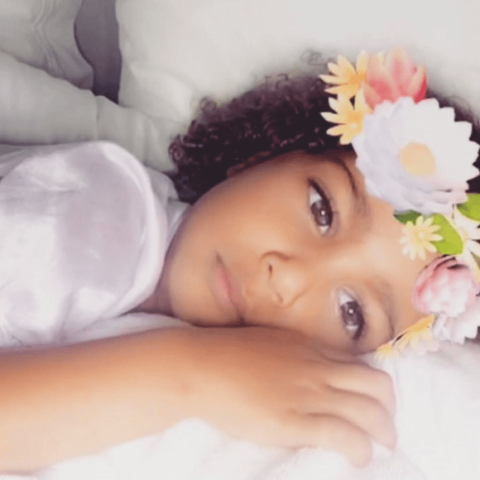 If you’re the daughter of Kim Kardashian and Kanye West, it’s safe to say your closet will be brimming with mini looks from Givenchy, Hermès and Alexander Wang—just to name a few. North West lives this glam life—and is often snapped by paparazzi (or her mama Kim K) wearing head-to-toe designer outfits.

The 3-year-old fashion star took the spotlight again last night, modeling a stylish look from Kim Kardashian’s and Kanye West’s new kids’ clothing line. Kardashian posted the adorable Snapchat video of “Northie” wearing a little yellow shearling coat and a neon yellow sequinned dress. “Wait, let me see you in this outfit you’ve got on. Do you see this Yeezy jacket, is that a Yeezy yellow shearling?” says Kim in the video. Her daughter stands on a table saying, “I’ve got a little shearling.”

In another one of Kardashian’s Snapchat videos, she asks her daughter: “Hey, where’s our model? See, Daddy and Mommy are doing a kids’ line and these are some of the pieces. Northie picked out the colours and the fabric.”

North’s tiny shearling jacket looks similar to the one her daddy included in his Yeezy Season 4 collection, which debuted during New York fashion week last September. The adult-size version was modeled by Sophia Richie in the show.

Though there’s no release date yet for the celeb couple’s new kids’ collection (“Coming soon” according to Kardashian’s Snapchat), we’re thinking Kanye’s just confirmed Yeezy Season 5 show (scheduled on February 15 during New York fashion week) would be the perfect place for the big reveal. Will North take the runway to model more looks from this stylish kiddie line (and possibly, break the Internet)? Stay tuned.

Photography via @kimkardashian
Trends, beauty secrets, culture & more
Yours for only $1 an issue
Subscribe now!