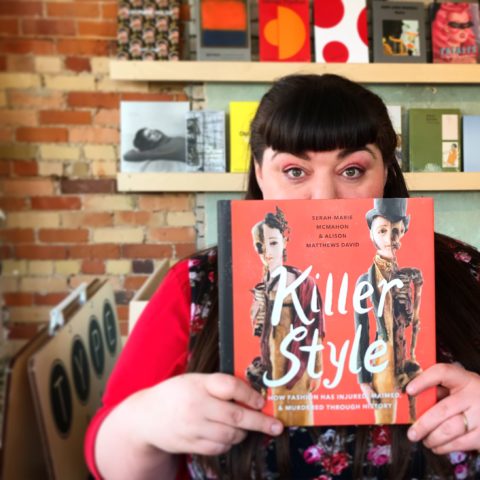 Her first children’s book, 'Killer Style: How Fashion Has Injured, Maimed & Murdered Throughout History', is out today.

In 2005, Serah-Marie McMahon was a 23-year old fibre-art student at Concordia University who was completely obsessed with clothing but couldn’t find a fashion magazine that wasn’t prescriptive or condescending, so she decided to create one herself. The result was WORN Fashion Journal, a thoughtful dissection of fashion that explored everything from how drag queens make their wigs to a social history of flight attendant uniforms. Beloved by fashion nerds the world over, it was always brainy but never boring. (Full-disclosure, I did an internship at WORN Fashion Journal in 2012 and it was hands down one of the best experiences of my life.)

After shuttering WORN in 2014, McMahon found herself pulled in a new direction: children’s books. Her first children’s book Killer Style: How Fashion Has Injured, Maimed & Murdered Throughout History, out today, chronicles the gruesome history fatal fashion for the under 4-foot set. Example: Did you know that companies used to sell radium-laced underwear for its supposed hygienic properties? We spoke with McMahon about her new book and why the switch from fashion magazine editor to children’s book author isn’t such a big leap after all.

Tell us the backstory of how you went from being editor-in-chief of a fashion magazine to writing children’s books.

I started WORN for many, many reasons but it was mainly because I was interested in how someone can love clothes but be less interested in the commercial aspects of the fashion industry. I was less interested in prescriptive ideas of what skincare routine to follow, and more interested in how clothing affects identity, and how the history of clothing is reinterpreted again and again. For 10 years that was what we tried to do. But by the end, there were plenty of [publications] who had also tried to take up that mantle and it felt a lot less necessary. we were no longer the only ones and it felt a lot less necessary. At the same time, I started working for Type Books as their community manager, and I really fell in love with the kids department.

What it like transitioning from being a fashion magazine editor to a children’s book author?

I know it seems very different from working at a fashion magazine, but actually it makes sense. At the root, it’s about explaining things and getting down to ‘what is the juice that makes this engine turn,’ and then laying that out in a way that is understandable. That’s not all that different from what I was trying to do with WORN. Also, kids are so much smarter than people give them credit too, which is a thing with fashion. I actually found I relied on my magazine publishing history really heavily while writing this kids book, in that it was about breaking down information into pieces and merging it into a theme. This book has a ton of sidebars, and we were sidebar crazy at WORN. We loved sidebars so much.

Why did you decide to write a book on the gruesome history of fashion?

Well I wrote the book with Alison Matthews David, an associate professor at Ryerson University, whose book Fashion Victims: The Dangers of Dress Past and Present came out in 2015 and was based entirely on her original academic research. A rights and sales person at Owlkids read the book and thought it would make a great kids book, so they gave Alison a contract. She had all the subject matter, but really struggled in how to find a way to write it for kids. I saw her at the bookstore one day and told her that I could help out, but she said, ‘Why don’t you just do it?’ So she introduced me to her publisher at Owlkids Books and they were like ‘Yeah okay we’ll hire you.’

It’s sort of a grim topic, how were you able to make that accessible for kids?

It’s actually really funny because when I tell people about the book I’ve written, I almost always get one of two reactions. One is, ‘I don’t get why this is for kids. This is totally inappropriate’and the other is, ‘Yeah my kid is totally going to be into this.’Kids love the macabre. There is a reason why we read Christopher Pike and Scary Stories To Tell In The Dark– because creepy stuff is interesting. The tone I used throughout the book is a little bit of Professor Snape mixed with Elvira, Mistress of the Dark. Combining those two voices, I found I could create a kind of dark feeling without being too serious.

I was totally disturbed by so many anecdotes in the book. More specifically, the studded belt that got recalled by ASOS in 2012 because it contained enough radioactive cobalt to set off bomb sensors at the US border. How much of the book’s subject matter surprised you?

What I didn’t realize going into writing the book was how much time I would spend digging through medical records. I thought it would be a lot of fashion writing, but instead I spent a lot of time at Robarts Library accessing old medical journals. I don’t know if it’s included in the final copy, but really recently Claire’s makeup was recalled for having asbestos in it. Even though the belt story sounds really scary, but you would’ve have to have worn that felt like 2000 times and then for like 60 years straight or something for it to have had any effect on you, even then it probably wouldn’t have killed you.

WORN was always extremely ahead of its time, talking about diversity and inclusivity before they became buzzwords in the fashion industry. If WORN were still around today what subjects would you be tackling?

We were ahead of our time, but in hindsight I still wish we did more. Every once in a while there are news stories that make me wish I still had worn. Like, Serena Williams’ tennis outfits. I would’ve loved to have done a deep dive into how her clothing choices have affected her career and how people view her. Serena Williams takes her clothing choices really seriously and uses them as a powerful statement of anti-patriarchal ideas. That would’ve been such a WORN article.

Photography Courtesy of Serah-Marie McMahon
Get the best of FASHION in your inbox Thanks for signing up!
You’ll get the latest fashion, beauty and celeb news delivered right to your email Now, check your inbox to complete your subscription
We won’t ever use your email address for anything else
Want even more FASHION? Follow us on social media.