We’re only a few days into the circus that’s Fashion Month and there’s already some exceptional front row celebrity watching to be had. Kelly Rowland and Hailee Steinfeld were two of the many celebrities attending the New York Fashion Week Fall 2014 shows this past weekend, sitting front row at Public School and Prabal Gurung, respectively. Both stars stepped out in black and white ensembles that borrowed some inspiration from the southwest, a trend that Chanel just may have helped start with their Dallas show.

Kelly Rowland debuted a new bob at the Public School Fall 2014 show—which included the label’s first womenswear collection—and while we were certainly getting some throwback Destiny’s Child vibes, we couldn’t look past her leather ensemble. The Tom Ford Fall 2013 top certainly helped Rowland tap into her Texas roots, as it incorporated some serious Southern-style fringe-work on the sleeves and hem. Rowland finished her look off with a white KTZ undershirt splashed with foreign text on the hem and thigh-high leather Christian Louboutin boots. The R&B songstress was definitely having a rock star moment with her ensemble.

Hailee Steinfeld took time to support designer pal Prabal Gurung at his Himalayas-inspired Fall 2014 show. While Prabal’s runway was filled with rich shades of orange and reds, Steinfeld opted for a polished monochromatic knit skirt ensemble paired with an oversized black coat and fedora. With brogue boots that screamed downtown cool, black smoky eye makeup and a fedora that was giving us some major True Grit vibes, Steinfeld certainly knows how to accessorize during the frigid New York winter. 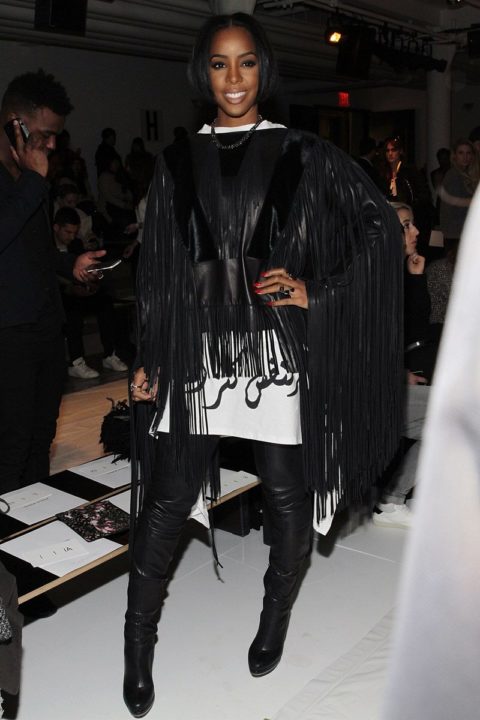 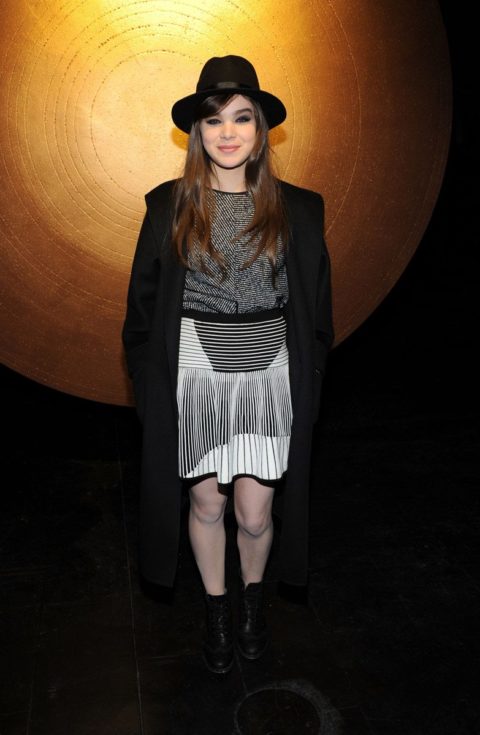 Hailee Steinfeld is wearing a monochromatic knit skirt ensemble with a black fedora, coat and brogue boots at the Prabal Gurung Fall 2014 show.