New York Fashion Week has us pretty excited for next spring, especially considering that our many of our favourite trends (like the crop top and ‘90s minimalism) are still going strong. With bralettes, sheer skirts and floral-print maxi dresses all featured at yesterday’s Michael Kors Spring 2014 show, we’re officially ready to skip winter. While all eyes were on the runway, two actresses, Katie Holmes and Kate Mara, lit up the front row in outfits by America’s favourite billionaire designer.

As someone who’s usually seen running about town in basic pieces, Katie Holmes’ floral ensemble was a breath of fresh air. Wearing head-to-toe Michael Kors from the Pre-Fall 2013 collection, Holmes’ ensemble consisted of a leaf cashmere knit sweater and a rose-print midi-length skirt. Keeping her accessories simple (and all in neutral shades), she added a skinny belt to cinch her waist, carried a minimalist clutch and wore pointed-toe heels also from the same collection. Appearing relaxed, Holmes pulled her hair back in a sophisticated updo and kept her makeup neutral, allowing her natural beauty to shine.

Showing off her girly side, Kate Mara looked pretty in pink as she rocked one of our favourite fall trends. She may be a sister to the demure and cool Rooney Mara, but Kate’s style is far from Rooney’s structured favourites. Mara wore a carnation-pink long sleeve form-fitting dress from the Michael Kors Resort 2014 collection, which featured a pleated flare skirt that showed off her toned legs. Allowing her playful dress be the centre focus, she held a beige clutch with gold leaf details, also from the same collection, as well as the same heels as Katie Holmes. Retaining a simpler beauty look, Mara had her hair sleek and done in a half-up hairstyle. Makeup was kept at a minimum with neutral pink lips and a light smoky eye. 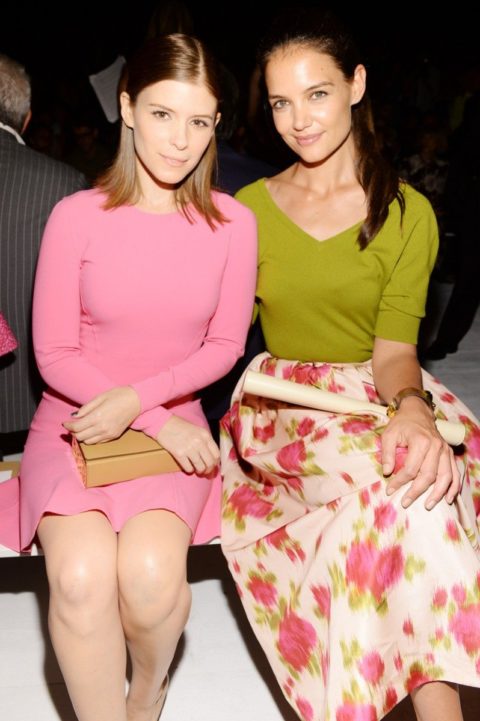 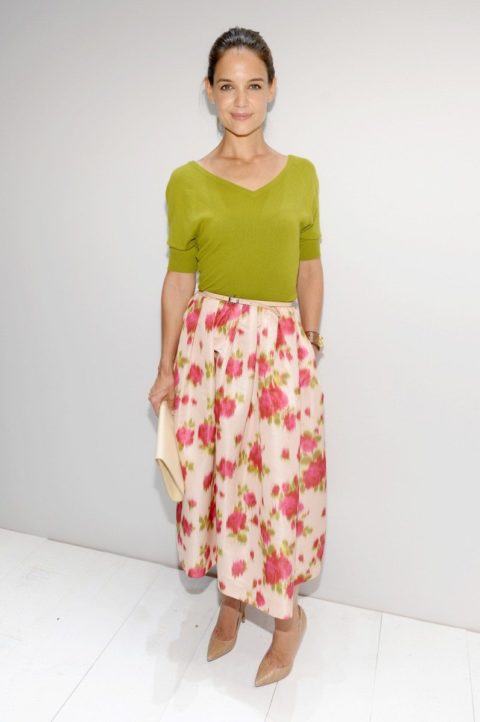 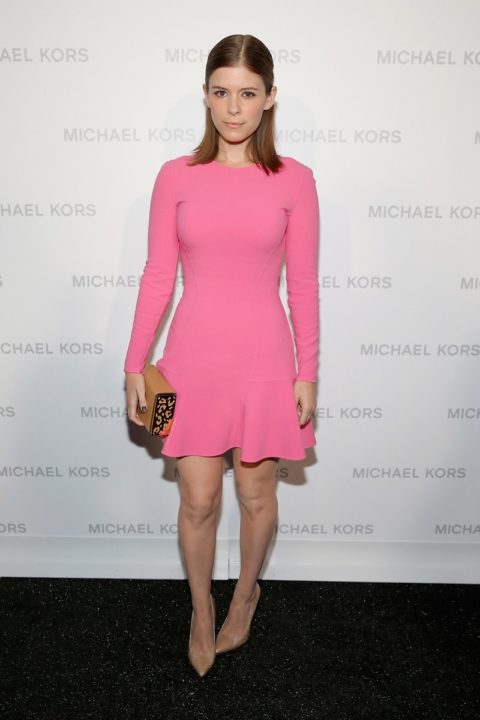 Katie Holmes is wearing a leaf cashmere knit, rose-print skirt, and neutral belt, clutch and pumps all from the Michael Kors Pre-fall 2013 collection.