Katie Holmes vs. Anna Kendrick: Which sweetheart star was best dressed in the front row at NYFW?

While our street style shots have captured an abundance of colour on the streets of New York, it seems that all-black is the dominant trend in the celebrity-filled front row. Case in point: Katie Holmes and Anna Kendrick. Holmes has been working the NYFW circuit for a few years now, whereas Kendrick is quickly becoming a front row staple at this season’s shows. While they have yet to sit side by side , their style is certainly in tandem.

At last night’s Donna Karan Fall 2014 show—which was also the label’s 30th anniversary—Katie Holmes switched up her usually demure style with a sexy black Donna Karan outfit. Comprised of a fitted leather bodice and flowing, sheer black skirt it was a departure from the city-casual looks she’s become known for. (Speaking of, her Holmes and Yang label doesn’t seem to be showing this season. Hmm.) The actress kept her hair simple with a tousled, natural wave and her makeup was at a minimum—very much in line with her campaign looks for Bobbi Brown. While Suri would have been an excellent addition to her outfit, Holmes looked like she was enjoying her solo night out and spent much of the show chatting with British singer Rita Ora.

She wasn’t in a leather bustier, but Anna Kendrick kept things form-fitting while attending the Tory Burch Fall 2014 show this morning. The Pitch Perfect star smiled and posed in a fitted short sleeve black sheath dress accented with white abstract polka dots. Kendrick finished off her look with a simple pair of black pumps and drop diamond earrings. We can’t quite say this look was beer-commercial hot for Kendrick but she certainly looked stunning as usual.

Two Fall 2014 fashion shows, two different front row looks—but which was your favourite? Cast your vote for Katie or Anna now in our poll! 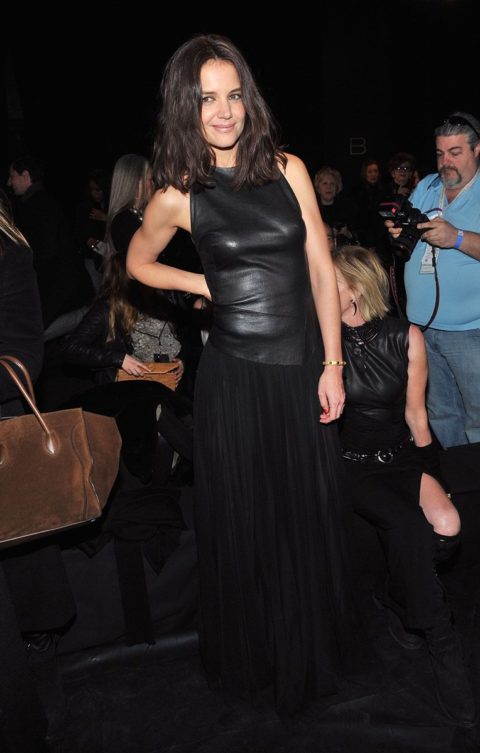 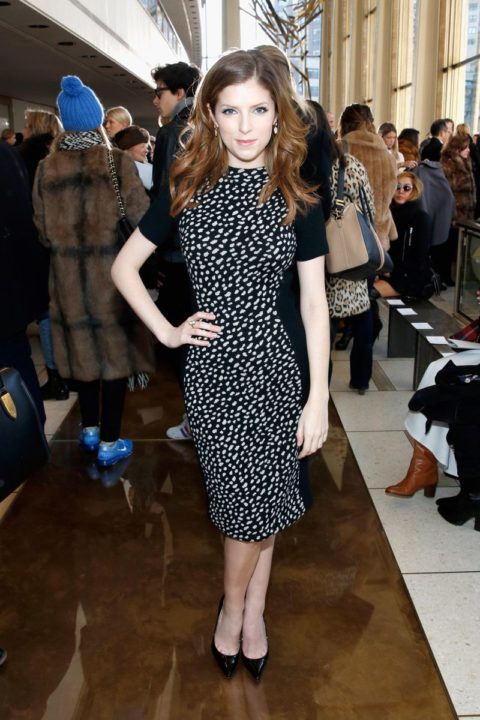