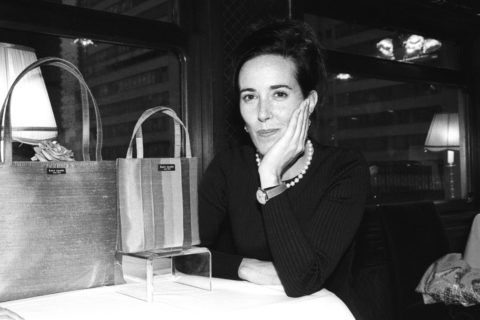 One year after the beloved designer's tragic death, we revisit her legacy.

Since its launch in 1977, FASHION magazine has been giving Canadian readers in-depth reports on the industry’s most influential figures and expert takes on the worlds of fashion, beauty and style. In this series, we explore the depths of our archive to bring you some of the best fashion features we’ve ever published. This story, originally titled “Kate Spade” by Jennifer Laing, was initially published in FASHION’s May 2002 issue.

There is a space off the main hallway of Kate Spade’s showroom that has been converted temporarily into a loose replica of the designer’s South Hampton beach house bedroom. The installation, built for the press preview of Kate Spade Beauty, is a peek into Spade’s personal world: The walls are stencilled with yellow cabbage roses – a convincing copy of the real antique wallpaper that lines her actual bedroom. A striped raincoat is thrown casually over a chair. The focal point, though, is a Louis XVI-style writing desk that is used as a vanity. It’s strewn with a comb and brush set, a vase of flowers, a few photos of Spade and husband Andy and most important, several bottles of Spade’s new perfume – which is the reason for my visit.

The rest of the showroom (one of four floors the company inhabits in a prewar building just north of Chelsea in New York City) is a collection of tidy but homey rooms each displaying a separate Spade collection: spring and fall handbags, stationary, shoes and small goods (wallets, cosmetics cases, eyewear). Glass vases filled with tulips and an assortment of early edition books (Silent Studio by David Douglas Duncan, Form by Horst, Lolita by Nabokov) are mixed in with the merchandise. Peggy Lee’s All-Time Greatest Hits wafts through the showroom (and your telephone receiver if you happen to be on hold).

As for Spade, she’s wearing her brown bob in one of her signature hairstyles: front pieces pulled back, ends flipped out. (“I have two hairstyles. It’s either like this or done all the way up,” she says.) Her cheeks and lips are rosy pink. Her nails are red. She’s sporting a black knit top, a black-and-white floral-print Barbara Tfank skirt, black heels (her own) and several vintage bracelets on each wrist. She’s a modern-day version of a 1950s-era hostess, all manners, poise and attention to detail, but sweet and down-to-earth at the same time. Somehow, it all works.

She’s a modern-day version of a 1950s-era hostess, all manners, poise and attention to detail, but sweet and down-to-earth at the same time.

In fashion circles, the Kate story is practically lore. In 1993, Spade (then Katherine Noel Brosnahan), a former accessories editor at Mademoiselle, was searching for the quintessential handbag. Unable to find what she was looking for, she and soon-to-be husband Andy, an advertising exec, decided to create their own. The six simple handbags combined classic style, colour, utility and a palatable price point to boot. They were an instant hit.

In a time when fashion in general, and accessories in particular, are so season-specific (that fringed bag is so last year, those bowling shoes so 2000) the fact that the original handbag styles are still the mainstays of the collection (and the horizontal shopper is still the best-seller) is particularly significant. This is one girl who understands the difference between fleeting trend and enduring classic. “It’s basically how I shop for myself,” she says. “You know there are things that I bought when I first got to New York that I still wear today.” In fact, Spade’s whole design philosophy is built on simple shapes and lasting styles, which explains why season after season her designs achieve a certain instant-classic status with consumers. Her accessories are never really out. To wit, a grey flannel messenger bag I bought seven years ago still looks right today because, despite a certain amount of wear and tear, it doesn’t scream any specific date in time. The Kate Spade consumer appreciates the timelessness and consistency of her designs. “She likes fashion but she doesn’t take it so seriously that she won’t wear the same thing next season,” says Spade.

Since the handbag launch, Spade has expanded into stationary, shoes and eyeglasses. She maintains the consistency of the style by personally overseeing every design no matter what the category. The company’s latest incarnation, Kate Spade Beauty, is a joint effort with Estée Lauder. The line, which debuts this month, is being billed as “a collection of Kate’s favourite things” and includes a range of bath and body products as well as a signature fragrance. The very fact that it’s a whole collection and not just a solo scent (which is how most fashion designers usually break into the beauty market) is typical Spade. After all, this is a woman who followed her successful handbags with unexpected paper and envelopes. “Everyone was like, what? You spent all this time doing another category and it’s not shoes or belts?” she says. “It’s just the same with beauty. I would never have done just a fragrance without the rest. This is how I really live. This is my daily ritual.”

Spade’s whole design philosophy is built on simple shapes and lasting styles, which explains why season after season her designs achieve a certain instant-classic status with consumers.

As it turns out, Spade’s daily ritual includes a lot of time in the bathroom soaking, soaping, polishing, powdering and moisturizing. “Andy can watch two TV shows in the time I spend taking a bath,” she says. “And then, after all that, he tells me I don’t look any different. But it’s not about that. It’s about feeling great and relaxed.”

The pair spent two and a half years developing the line. They worked especially hard on the fragrance, which infuses every item from body wash and bath oil to moisturizer and dusting powder. The scent revolves around honeysuckle (“When Andy and I first smelled honeysuckle we just looked at each other and knew this was it.”), a flower that reminds Spade of summers growing up in Kansas City, Missouri. They added gardenia, jasmine, tuberose, french muguet and sandalwood to create a soft floral fragrance that’s both feminine and elegant.

Besides the fragrance, Spade’s legions of fans will no doubt be charmed by a slew of deliberate little touches: three similar but slightly different-shaped perfume bottles (“It’s a collection, so I wanted to do a collection of bottles as well.”), the terry mitt and headband which come with the body wash and bath oil, respectively, and of course, the boxes that serve as the outer packaging. Each is lined in that same cabbage rose print and all are characterized by a signature witty phrase (a carton of body polish reads: “she has natural polish and a quick sense of humor,” and a box of body moisturizer reads: “her skin is soft, her wit is keen”). “Though the box is secondary to what’s inside, I don’t think you need to ignore it,” says Spade. “Giving it a little bit of uniqueness makes it so much more distinctive.” She would know. It is after all, what makes Kate Spade so, well, Kate Spade.