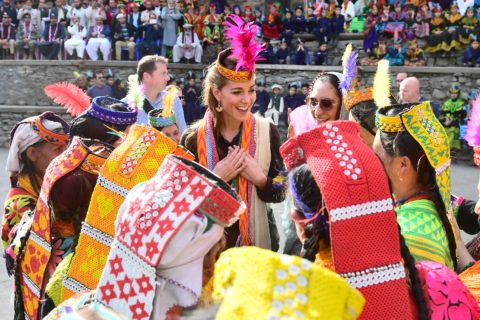 Today's outing was designed to shed a light on climate change.

The Duke and Duchess of Cambridge landed in Pakistan less than two days ago, but you’d never know it from their jam-packed schedule.

After disembarking in Islamabad on Monday night, the pair then had four events on Tuesday and the second official day of their five-day tour has been no less busy.

The pair begun the day in the Hindu Kush mountain range and visited the Chitral district of the Khyber Pakhtunkhwa province. According to Kensington Palace, the reasoning behind this excursion was to help draw attention to the effects of climate change and what can be done to help stop it. The visit was anchored by a stop at a melting glacier. The couple also watched the community partake in emergency response drills implemented after severe flooding hit the region in 2015.

Upon arrival, Kate and William were both handed traditional Chitrali garments – Kate, a beautiful cream embroidered coat and hat (the same style Princess Diana wore on her visit to the region in 1991) and William a white embroidered jacket. Kate slipped her jacket over the utility-inspired ensemble she had chosen for the day’s outing which included a midi skirt, button shirt and leather vest in various earthy tones, paired with flat brown suede boots from Really Wild.

Later on in the visit when meeting with the Kalash people, Kate was also presented with a colourful headpiece featuring intricate orange embroidery and stunning pink feathers.

Many of the stops on this tour echo those undertaken by Princess Diana some 28 years ago. To commemorate the occasion, today Kate and William were presented with a book celebrating her visit.

Last night, William gave a speech highlighting the importance of their visit to the Chitral region today, saying, “In Pakistan, your spectacular glaciers – and those of the wider Hindu Kush Himalaya region – serve as a critical water store for a quarter of a billion people. And over 1.6 billion people rely on the great rivers that flow from the mountains in this part of the world. Yet because of the effects of global warming at altitude, a one and a half degree celsius temperature increase overall could mean warming of over two degrees celsius for Northern Pakistan’s highest mountains. This could lead to a loss of over a third of these vital glaciers in less than a century, with enormous impacts not only on the availability of water, but on agriculture and hydropower generation.”

Photo by Samir Hussein/WireImage
Get the best of FASHION in your inbox Thanks for signing up!
The latest fashion, beauty and celeb news delivered right to your email #FASHIONforall Now, check your inbox to complete your subscription
We won’t ever use your email address for anything else
Want even more FASHION? Follow us on social media.