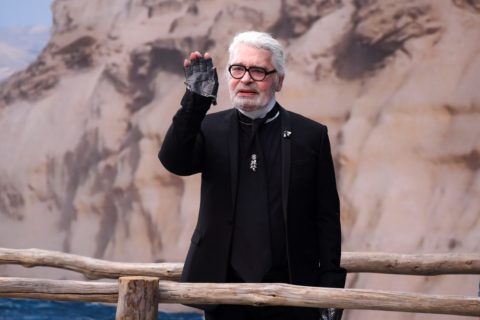 Karl Lagerfeld came from a different generation. The silent generation, as it’s called, or the ‘lucky few’; a cohort who came of age during the prosperous mid-century where new ideas were plentiful, employment rates were high, mortgage rates were low, and society was beginning to emerge from the haunting spectre of war. A generation for whom retirement was an actual possibility that people planned for rather than a distant twinkle in a disembodied eye. Karl Lagerfeld didn’t care for retirement, however. “Do you know how long my contract is? Until 2045,” he once spat at a journalist who dared to ask of succession.

Even at the age of 85, after he grew a mangy hipster beard and grinned revealing a maw of missing teeth, he kept on designing. Though he failed to take a bow after the Chanel couture presentation in January because he was “feeling tired” – his top assistant Virginie Viard, who has been announced as his successor, appeared in his stead – his absence failed to stoke much suspicion regarding his health because it was always a given that Karl would continue to carry on. He was essentially the human embodiment of the phrase, “When you quit, you die.” (In 2007, he told the New Yorker, “I do my job like I breathe. So if I can’t breathe I’m in trouble!”)

Born in 1933, in Hamburg, Germany, Lagerfeld had a habit of obfuscating his origins. Was he the noble son of “Elisabeth of Germany” and Otto Ludwig Lagerfeldt of Sweden as he often claimed? Not exactly. Lagerfeld was, in fact, the son of a housewife and an evaporated milk salesman. Yet he managed to transcend his humble origins through his work, eventually earning the nickname “Kaiser Karl,” which bestowed on him the aristocratic title he so longed to be born with.

Lagerfeld became good friends, and later rivals, with his contemporary, Yves Saint Laurent. The two men met after placing in 1954’s International Wool Secretariat design competition; Saint Laurent was only 18 and Lagerfeld, 21. (Lagerfeld’s companion of two decades, Jacques de Bascher, had an affair with Yves Saint Laurent chronicled in the book Jacques de Bascher: Dandy de l’ombreby Marie Ottavi.) He began his career as assistant to Pierre Balmain and eventually worked his way up to become head designer at Chloé. In 1965, he was appointed creative director of Fendi. But the real barn-burner of his career came in 1983, when he was appointed creative director of the house of Chanel. Though many counselled against him taking the post — “Everybody said, ‘Don’t touch it, it’s dead, it will never come back,’” Lagerfeld told The New Yorker– he decided to accept the position as a challenge.

Lagerfeld and Chanel had a mutualistic relationship, like the oxpecker bird who picks the ticks off a rhinoceros’s back. The historic house of Chanel gave Lagerfeld an archive to draw from, and a launchpad through which he could eject his public persona onto the world; Lagerfeld offered Chanel his meticulous design ability, a voracious appetite for creativity and a abundant productivity.

How fitting that Lagerfeld made his name at the helm of Chanel, where he managed to fashion a presence just as iconic as the namesake of the label he represented. Coco Chanel had her little black dress, strands of pearls, and a perpetual cigarette dangling from her lips; Karl had his dark sunglasses, fingerless gloves, tiny ponytail, and Diet Coke habit. In the business of being memorable, Lagerfeld was masterful at his job. He created design elements so indelible they barely seem attributable to one person: Chanel’s interlocking C logo, their quilted handbags and two-tone spectator pump. But he created nothing more enduring than a successful caricature of himself.

Lagerfeld embodied the image of an unhinged, out-of-touch designer whose brilliant designs were sometimes overshadowed by his preposterous behaviour. Lagerfeld was prone to issuing pithy declarations that ranged from hilarious (“Sweatpants are a sign of defeat. You lost control of your life so you bought some sweatpants.”) to absurdly offensive (On #MeToo: “I’m fed up with it. What shocks me most in all of this are the starlets who have taken 20 years to remember what happened.”). Every time Lagerfeld made an off-colour comment it became the subject of animated whisper for days after.  He was “physically allergic” to flip flops, decried selfies as a form of “electronic masturbation” and mocked those concerned about thin models as “fat mummies sitting with their bags of crisps in front of the television.”

And he kept on giving the world his antics, long after it had stopped desiring them. In the past decade, the cultural appetite for such rude antics has markedly decreased. The balance of power is shifting, and marginalized voices are finally being heard after being relegated to live in silence for too long. It is no longer funny to be mean. The world has changed, yet Karl always remained.

For fashion lovers, I suspect that February 19th, 2019 will go down in history as one of those ‘Where were you when JFK died’ moments. When I first heard Karl was dead, I was brushing my teeth in the bathroom getting ready for a regular day at work until my boyfriend called out to me from bed. It wasn’t the cold shock and rising nausea I felt upon learning of Alexander McQueen’s death in 2010. Rather the news hit me with a thud, followed by hollow resignation.

Lagerfeld meant a hell of a lot to the fashion world, but I suspect the real impact of his death won’t become readily apparent until years have passed. The fashion industry is in the midst of seismic change and Lagerfeld’s death may come to symbolize a demarcation of time periods, where the new sensibility has replaced the old. The fashion system is in the midst of a painful and protracted death, and as it attempts to redefine itself, it has not yet let go of its reliance on runway shows and print media, two institutions that that now feel particularly old school. It may come to pass that Lagerfeld’s death will speed up the progression towards a New (Fashion) World Order.

It feels somewhat fitting to end a tribute to Lagerfeld with his own words, which he was clearly so fond of. One of the greatest fashion characters who ever lived once evaluated his own trajectory; “I’ve always known that I was made to live this way, that I would be this sort of legend.”