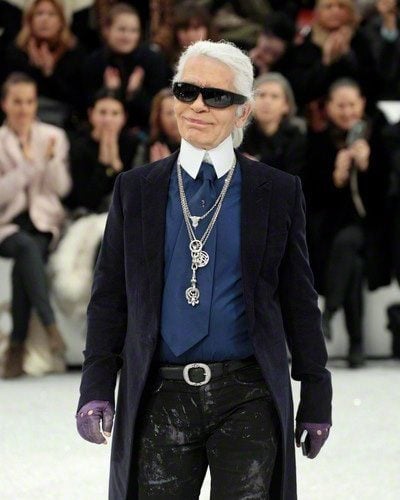 And Jean Paul Gaultier is making a theatre show of his life.

Here are all the top fashion stories you need to know today:

Karl Lagerfeld has officially taken a stance on the Harvey Weinstein scandal, sharing his views via — what else? — a drawing. In the Kaiser’s latest “Karlikature” for the Frankfurter Allgemeine Zeitung newspaper, the disgraced Hollywood producer is depicted as a pig, with the German headline reading, “Do you know Schweinstein?” (schwein being the German word for swine or pig). As for Uncle Karl’s verbal opinion of Schweinstein? “I never liked this man,” he commented. ‘Nuff said. (WWD)

Get ready, everyone: Jean Paul Gaultier is putting on a “Fashion Freak Show” next autumn. The “racy, music-filled theatre show,” which combines singing, dancing and acting, is based on the story of the 65-year-old designer’s life and will draw on the people who have inspired his designs (we’re guessing Madonna, Kylie Minogue and Dita Von Teese). It’s set to debut in Paris before going on an international tour. (Business of Fashion)

The moment everyone has been waiting for has finally happened: Miranda Priestly met Anna Wintour. OK, it was actually Meryl Streep who met the Vogue editor-in-chief, but the nod to The Devil Wears Prada (a.k.a. the film in which Streep portrayed Priestly, a Wintour-esque editrix) is loud and clear in the four-minute video. But the clip wasn’t all just playfully touching on the 2006 film — Anna and Meryl (who just so happens to be Vogue‘s December 2018 cover star) chat about Streep’s role as Katharine Graham in Steven Spielberg’s new movie, The Post, the Harvey Weinstein scandal and the “feminist agenda.” (Vogue)

In an open letter published on WWD, British model Edie Campbell slams the fashion industry for its abusive treatment of models, particularly male. “We have a problem: We operate within a culture that is too accepting of abuse, in all of its manifestations. This can be the ritual humiliation of models, belittling of assistants, power plays and screaming fits. We have come to see this as simply a part of the job,” she writes. (WWD)