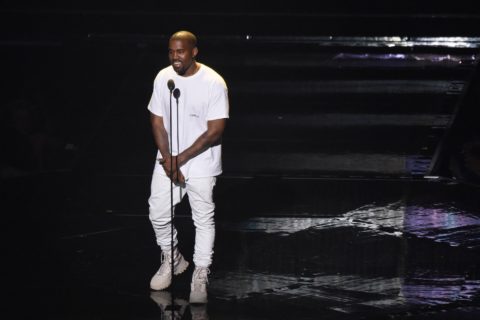 The Yeezy designer just filed a new trademark to produce apparel under the name “Sunday Service.”

By all accounts, Kanye West’s Sunday services are joyous affairs. Based on leaked footage from the invite-only, celebrity-studded events – reportedly Orlando Bloom, Courtney Love and David Letterman have all attended – an identically-dressed gospel choir performs masterful renditions of Christian standards while accompanied by a live band. The choir is reportedly flown into whichever location West has decided to hold the service in that week, and has backed up the musician on spiritual adaptations of his own songs. West’s wife Kim Kardashian swears the services are more concert than church service, but it does seem as if everyone who attends has congregated to worship – whether that’s at the altar of Jesus or Kanye West remains to be seen.

Now it seems West is looking to harness the success of Sunday service by potentially creating a themed clothing line around it. According to WWD, West filed a trademark for “Sunday Service” on July 19th that includes “bottoms, dresses, footwear, headwear, jackets, loungewear, scarves, shirts, socks and tops.” The application was filed byMascotte Holdings, Inc., a company that has previously filed trademarks on West’s behalf.

If I had to guess, I would bet the the merch will be entirely black-and-white featuring wavy, skateboard-inspired graphics that are tailor made to appeal to the hypebeast/hypebae set. In any event, Kanye has a lot of talented people working for him so it’s almost guaranteed to be better much better designed than Justin Bieber’s clothing line, Drew.

It’s unclear when the merchandise might be available, but we’re definitely keeping our eyes peeled. (Apparently, West also filed an entertainment trademark for the term “Half Beast” in April. We wonder what that’s all about…)