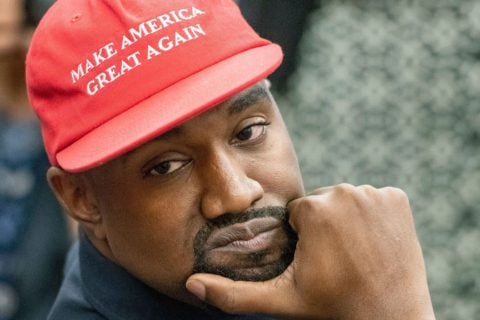 As if wearing MAGA hats and having rambling stream-of-consciousness meetings at the White House wasn’t enough, Kanye West has decided to step up his pro-Trump stance by designing a line of apparel encouraging African Americans to leave the Democratic party. In support of the “Blexit” movement—a play on the words black and Brexit, in case you didn’t catch that—the t-shirts and hats debuted over the weekend at a meeting of young black conservatives in Washington. West didn’t attend the conference but was there “in spirit,” according to conservative pundit and the founder of Blexit, Candace Owens.

#BLEXIT is a movement of bright colors and hope.

A message to minorities that we are not permanent victims, belonging to the Left.

“Blexit is a renaissance and I am blessed to say that this logo, these colours, were created by my dear friend and fellow superhero Kanye West,” Owens told Page Six.

Considering the overall mood of the Blexit website–it’s clearly going for disruptive and anarchic, with statements like “Blexit is a frequency for those who have released themselves from the political orthodoxy” and video testimonials by black Americans who “choose to Blexit”—the t-shirts are oddly asynchronous, in cheerful hues like aqua and lavender, with the Blexit logo in neon green. They look more like the cheesy company t-shirts you might see at a marathon than something designed to elicit a political rebellion. But the cheery colours belie the group’s insidious ideology. West aligning himself with this movement is dangerous not because it’s encouraging his fans and followers to embrace the Republican party, but because the group is disseminating fake news and deliberately provocative anti-liberal propaganda, as outlined expertly by historian Kevin Kruse in this Twitter thread:

You don't know what you're talking about here on your site: https://t.co/imNN7GeKoH

Every one of these is pretty much a lie. pic.twitter.com/LYY44oJz8d

The apparel displays either the group’s motto, “We Free,” or the word “Blexit,” and although the product descriptions on the site at one point included the words “Design by Kanye West,” his name now longer appears on the site. Owens issued a statement on Twitter today clarifying West’s involvement, which he then re-tweeted.

#BLEXIT is about the beautiful stories of so many black people who have awakened themselves to the possibilities of our future, as Americans.

The press is trying to use Kanye’s name to create drama and further divisiveness which is WRONG.

Here is statement of clarity from me: pic.twitter.com/PJSdM2PRFi

Owens’ vision for Blexit completely fails to take into account the fact that no race or group of people functions as a monolith. How black people vote depends on each individual’s own beliefs and values, and trying to get them en masse to support one political party over another isn’t rational. When it comes to West, as with most of the things he’s been saying and doing lately, this latest move is perplexing, because while he’s encouraging his fellow African Americans to abandon Democrats, he’s also showing up at rallies in Chicago to support Democratic candidate for mayor Amara Enyia. Go figure.