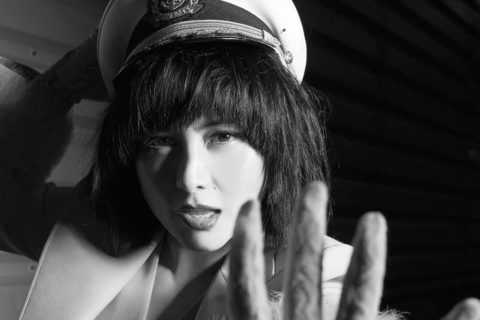 The actor and singer wears many hats — literally and metaphorically.

Sometimes I’m afraid to show my huge personality,” says Josie Ho. “I feel like I might speak the wrong word during conversations, but I’m slowly growing out of it.” It’s an unanticipated statement coming from someone who exists in the extroverted orbit of entertainment. But Ho — a singer, film company co-owner and actor whose appearance in this summer’s period drama Edge of the World cemented her status as one to watch in the cinematic sphere — seems to relish in surprising others.

Perhaps that’s why she has such an enormous assortment of hats; they allow her to bounce from one personal character to the next with ease. And glamour and intrigue have been part of her life all along. As the daughter of a casino magnate, Ho recalls observing how Hong Kong’s “show business divas moved and how they carried themselves.”

Growing up between the Asian metropolis and Canada, Josie Ho says she truly dived into developing her personal style in her late teens/early 20s during the 1990s. She counts the likes of Madonna, Anita Mui, Courtney Love, Yves Saint Laurent and his muse Betty Catroux as her icons when it comes to dressing.

Late fashion editor Isabella Blow also gets a name-check from Ho, and it’s easy to see why when you consider each woman’s affinity for grand sartorial gestures. Yet despite the high level of chic associated with the cloches, turbans, fedoras and more that occupy much space in her home, Ho’s preference for wearing hats was born from a practical standpoint. “I started wearing them so I wouldn’t have to do my hair,” she says. “And once the hat is on, I feel there is no need for makeup as well. Add some shades to the look and we’re ready to rock!”

While Josie Ho’s eye is drawn to the most sensational examples of millinery throughout history, it’s the humble beret she wore in cadet school that she says is her most memorable. “I was so proud of it,” she recalls. “It was from the 1940s, and I shaped and cared for it myself. I had to put AA batteries inside it to prop it up while I was wearing it.”

Tending to her collection is just as relevant for Ho today. Her hats are arranged as a decor aspect, and her home in Hong Kong includes custom displays.

Ho’s extravagant assortment includes a wealth of vintage headwear, and she counts Los Angeles’s The Way We Wore as a favourite destination. Doris Raymond, the boutique’s owner, says the admiration is mutual. “Of all the customers and clients we have from around the world, Josie Ho is absolutely at the top of our list of favourites because she is a fantastic eclectic dresser,” says Raymond. “Bes-Ben, Jack McConnell, Lilly Daché and Mr. John are some of the statement-hat makers Ms. Ho has worn or responded to.”

In keeping with the intensity of her vestiary flair, Ho says to stay tuned as she continues to make brave choices with her professional projects as well. “Some of my classmates from childhood didn’t understand how and why I became such a bold performer, but that’s what I really am.”