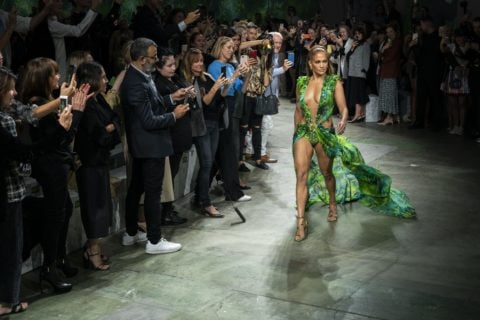 The Fashion News That Had Everyone Talking This Week

Unless you’ve been phone-free for the past 48 hours, you’ve likely seen the sassy video of Jennifer Lopez strutting down the catwalk at Versace’s Milan Fashion Week show a million times on your Instagram feed. And whilst the footage is jawdropping (seriously though, how is she 50?!), so too is the revelation that JLo was the reason Google Images was invented. Yep, you read that right. After the singer attended the 2000 Grammy Awards wearing her original plunging green gown from Versace, searches for the dress exploded and resulted in Google creating Google Images so people could find exactly what they were looking for. Wild.

For the Spring-Summer 2020 Collection, Versace honors an iconic moment when fashion and culture became a catalyst for technological progress. Passionate for constant innovation, Chief Creative Officer, @donatella_versace uses the latest technology – the Google Assistant – to call for @jlo wearing the Jungle dress on the runway, creating yet another unforgettable, Google-worthy Versace moment. #MFW #VersaceSS20

The 2019 Green Carpet Fashion Awards are being held today and legendary designer Valentino Garavani will be honoured with the Legacy Award in recognition of his “savoir faire and artisinal tradition,” says Carlo Capasa, the president of the Italian Camera della Moda. In an interview with WWD, he added that Garavani’s designs are “timeless, to be passed on from mother to daughter.” Garavani is one of 10 winners at tonight’s ceremony, with the other nine to be revealed at the event.

It was announced today that @realmrvalentino will be the winner of this year’s Legacy Award at #GCFAItalia hosted by @cameramoda in collaboration with Eco-Age ?

YouTube’s new fashion hub is up and running, and Louis Vuitton is the latest luxury brand to create its own content channel on the platform. Called LVTV, the channel will offer a behind-the-scenes look at the goings-on at the luxury French fashion house, including at its runway shows and with celebrities, like Emma Stone and Karlie Kloss, as they get ready for major events (think the Oscars and Met Gala). The videos will be categorized in five ways: savoir-daire, institutional, friends of the house, travel and campaigns, according to WWD. This is your front row seat sorted, permanently.

Photograph by Imaxtree
Get the best of FASHION in your inbox Thanks for signing up!
The latest fashion, beauty and celeb news delivered right to your email #FASHIONforall Now, check your inbox to complete your subscription
We won’t ever use your email address for anything else
Want even more FASHION? Follow us on social media.