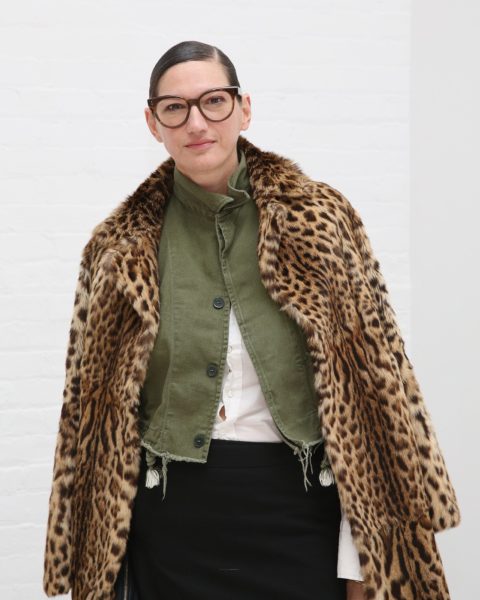 Jenna Lyons Exits J.Crew In A Cloud of Leopard Mixed With Stripes

Canadian Somsack Sikhounmuong will be the company’s chief design officer.

It’s the end of a mixed pattern era. J.Crew’s Jenna Lyons is leaving the company. She started her career with J.Crew 26 years ago as “an assistant to an assistant” and would eventually mold the company into her own likeness as she rose up the ranks to become president and executive creative director for the brand.

“Jenna and I got together and we both agreed it was time for a change,” J.Crew chief executive Mickey Drexler told fashion industry bible Business of Fashion. “That being said, she’s got plans to do other things. It’s been a great run.” One can’t help but assume it’s related to the company’s financial troubles that go back to 2015. But even if they think shedding Lyons will help, what she brought to the brand is indisputable.

Not only did Lyons become one with J. Crew injecting her point of view into the clothes, she also became a lifestyle icon for women aspiring to juggle life, work and family. Her eclectic way of putting clothes together was documented in the early day of street style photography, her Brooklyn home was featured in Domino, her son appeared in seasonal catalogs, and her personal life the stuff of tabloid fodder. While we expect celebrities to enthrall, Lyons was a normal, hard working person, and for that she was credited (and recognized) for fueling J. Crew’s international appeal and expansion. She lived Drake’s ethos, ‘started from the bottom, now we’re here.’

Canadian-raised Somsack Sikhounmuong, who is the retailer’s head of women’s design will now be the company’s chief design officer.

In a press release, Lyons said, “I am excited about the next chapter for J.Crew as well as the opportunity for other creative leaders within the organisation to step up and take on new responsibilities.” As for her secret to becoming a fashion powerhouse, and what advice she would share, Lyons once told us: “Love what you do. The people who I see as successful stay in the moment and try to do the best they can. Those are the people you want to promote. They’re the ones who are thinking about the new ideas and trying to do their job better.”

Can’t wait to see what she does next.

Photography by Robin Marchant/Getty Images
Get the best of FASHION in your inbox Thanks for signing up!
The latest fashion, beauty and celeb news delivered right to your email #FASHIONforall Now, check your inbox to complete your subscription
We won’t ever use your email address for anything else
Want even more FASHION? Follow us on social media.