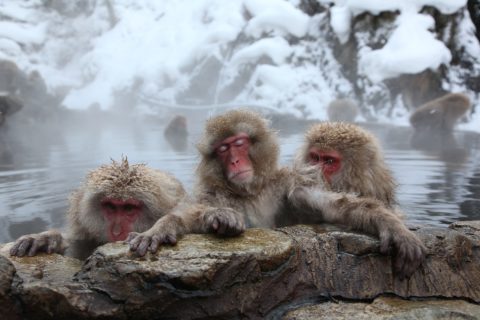 In Shibu Onsen, a rural hot spring town in Japan’s Nagano Prefecture, tourists soak in a series of outdoor public bath houses. They escape from the snow to sit in extremely hot waters, reaping the therapeutic benefits of the mineral hot spring. It’s a relaxing, rejuvenating Japanese tradition — and atop a nearby mountain, a group of primates are participating in the same ritual.

I first came across these mystic, spa-obsessed Snow Monkeys in a meme. Memes are relatable by nature, but I had never related to an Internet image so much in my many (many) days on the web. There’s a monkey who hangs out in a giant steaming bath all day with her girl friends? She sometimes brings her cellphone into the tub with her for entertainment? Within a year, I had travelled over 10,000 km to pay homage to these sacred, zen AF creatures in person.

*Snow Monkeys*: Are we really different?

Having made the pilgrimage to Jigokudani Mountain, I knew that the world of the Snow Monkeys was “a world much like our own.” I didn’t need science to tell me that these Japanese macaques were living their best stress-free lives, but researchers felt the need to scientifically validate the benefits of the Snow Monkey’s behaviour. Animal experts have long suspected that the Snow Monkeys use hot springs to stay warm in the winter. A new study published in the journal Primates confirms this theory, and adds findings that regular bath time also helps female monkeys cope with stress.

Now I’m sure you’re thinking: “How does one collect such data?” Rafaela Takeshita and a team of researchers from Kyoto University “studied twelve adult females during the spring birth season, from April to June, and winter mating season, from October to December. They determined how much time the monkeys spent in the hot springs, and which monkeys bathed the most. The researchers also collected faecal samples during times of extreme cold and analysed the concentration of faecal glucocorticoid (fGC) metabolite present. This was done because thermoregulatory stress and the management of a body temperature is known to influence concentrations of glucocorticoids, which belong to the family of steroid hormones.”

Essentially, their study showed that, like humans, taking a spa sesh reduces stress hormone levels in female snow monkeys. They also found this: “the around 500 visitors per day, who watch the snow monkeys bathe, had no effect on the levels of stress hormones released.” Wait… so these magical hot waters are so relaxing that they don’t notice the millions of visitors pointing cameras in their faces? That’s a level of zen we all can aspire to.

Photography via Koichi Kamoshida/Getty Images
Get the best of FASHION in your inbox Thanks for signing up!
The latest fashion, beauty and celeb news delivered right to your email #FASHIONforall Now, check your inbox to complete your subscription
We won’t ever use your email address for anything else
Want even more FASHION? Follow us on social media.