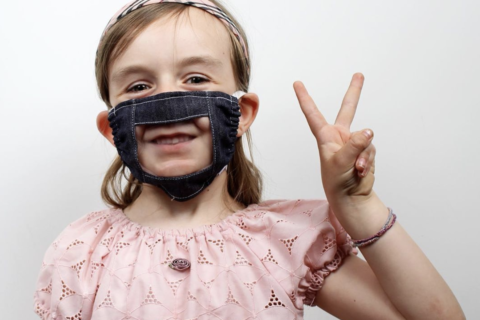 These innovative face coverings support the needs of the deaf and hard of hearing community.

Iz Adaptive, the pioneering brand founded in 2009 by Toronto-based designer Izzy Camilleri, recently released a new take on the non-medical face masks it has offered for the duration of the COVID-19 crisis. The new design features a clear panel to facilitate connection between wearers and people who are deaf or hard of hearing, and rely on lip reading as part of communication.

Camilleri was motivated to create the updated version of the mask after the limitations of the face coverings that have become ubiquitous in recent months was flagged by her friend, makeup artist Jackie Shawn. “There’s a guy, Craig, who lives in her building who uses a hearing aid and is a lip reader,” says Camilleri, adding that initially, she “didn’t realize the impact of us having our faces covered” in terms of interpersonal relationships.

Shawn’s suggestion prompted a meeting between her friend and Camilleri, so she could better understand the needs for this new style. The masks are now on sale individually as well as in packs of three (so you always have one on hand while others are being laundered), and 20% of the proceeds from sales will go to the Canadian Hearing Services. (A percentage of proceeds from sales of Iz Adaptive’s other masks are being donated to the Christopher & Dana Reeve Foundation; and Camilleri also teamed up with Birks in April for a mask donation drive.)

Always feeling compelled to wear my Lip Reader… aka Smile Reader mask. You never know when someone you’re communicating with is understanding you fully and completely ?. ?♥️?? You can find these masks here: izadaptive.com 20% of the sale of these masks will go to The Canadian Hearing Services. chs.ca✌️. #lipreading #lipreader #lipreaders #smile #masksforall #covid19 #2020 #izadaptive #izzycamilleri #canada #thejunction #toronto

This recent launch is just one in a long line of innovations for Camilleri since she started Iz Adaptive over a decade ago. A designer working with the likes of David Bowie and Angelina Jolie, her career took a turn when FASHION editor-in-chief Bernadette Morra recommended Camilleri’s creative services to a former colleague, Barbara Turnbull, who was a wheelchair user.

“I had no idea that someone with a disability, or someone who used a wheelchair, had specific clothing needs,” says Camilleri. “You don’t realize what it took for them to get dressed, as well as how limited the options are for someone like her. It was such an eye-opening experience.”

Many “revelations” later, Camilleri’s brand is now part of a growing number of lines focused on creating apparel and accessories for a variety of differently-abled people; the momentum of this movement has been spurred on thanks to the increased visibility of influencers like Lolo Spencer, and the advocacy of disability styling expert Stephanie Thomas.

“Sometimes people go into a shell, and think they can’t wear things like that,” says Camilleri of how Spencer’s bold fashion sense is inspiring so many. “She’s out there to say hey, wear what you want. And at Iz Adaptive, we have helped people get out of their shell. We’ve impacted lives with our offering. I’ve had people brought to tears of joy over something that they thought they could never wear. The thing with adaptive clothing is, it’s more than just clothes. It offers inclusion, it offers sense of self, it offers dignity.”