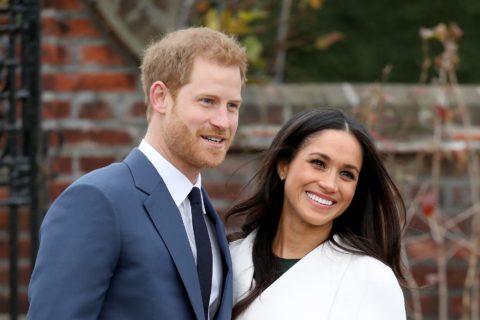 Amanda Dishaw is a Vancouver-based mom and the mastermind behind Meghan’s Mirror, a style blog chronicling the every sartorial move of Meghan Markle’s. You liked the simple white button-down Markle wore to the Invictus games? Dishaw can tell you exactly where it’s from, how much it costs, and where you can still buy it – even if it’s appears to be sold out everywhere. Dishaw has been a fan of Markle’s since the inception of Suits and started the blog in October 2016, long before the royal engagement was announced. Dishaw says that pre-engagement, Meghan’s Mirror received approximately 100-200,000 unique visitors per month, but traffic has now doubled, and the blog has since racked up half a million visitors in the past two weeks. How much information can you glean from studying someone obsessively? Turns out, quite a lot.

It’s official! #MeghanMarkle and #PrinceHarry are engaged! Meghan wore a dress by @parosh_official, coat by @thelinenyc and jewlery from @maisonbirks

So how did you end up falling into royal blogging?

In 2012, I had my first child and I was on maternity leave looking for something to do that didn’t involve changing baby diapers. Kate Middleton had just joined the royal family and really come into her own. I was watching TV late one night and thought, “I want to be like her.” She always looks so put together, so I started a blog called What Would Kate Do that covers the life and style of the Duchess of Cambridge. From there on, I took on a co-editor named Christine Ross who lives in Washington, D.C. Christine had just graduated from University when she reached out to me because she found the message of the blog really resonated with her. So I brought her on and it’s definitely one of the best decisions I have ever made. We’ve never actually met in real life. As my mom likes to say, Christine could be a creepy old man behind his computer catfishing me. But I think that would be the longest con in history for absolutely no gain.

How come you decided to start a blog about Meghan Markle’s style before it was announced that she would even be marrying into the royal family?

In the middle of 2016, [What Would Kate Do] started to get a lot of questions about Meghan Markle, specifically about what she was wearing, because it’s very different from Kate. Once the announcement came out from Kensington Palace saying that Meghan was a serious girlfriend of Harry’s and to please leave her alone, we kind of took that as a sign that there was a little bit more there. Maybe we were the only ones crazy enough to take a bet on a royal girlfriend, but we had a really good feeling about it!

We’re still gushing over the first #MeghanMarkle and Prince Harry outing… and Meghan’s classic yet completely perfectly disheveled look. All the details of her look are #ontheblog or available at @liketoknow.it #liketkit http://liketk.it/2sR7g

Why do you think you were so drawn to Meghan Markle initially?

I’m a fan of Suits and I’ve watched it since the beginning. I won’t lie, I think it was initially her TV character and the clothes. But then I started getting to know her, mainly through her (now-defunct) blog The Tig. It was a really great insight into who she is as a person. I became interested in the fact that she is so down-to-earth and approachable and very humble. She’s someone who is very comfortable with who she is. She doesn’t make apologies for the fact that she’s not wearing the latest, greatest, trendiest clothes. She’s very comfortable with her minimalist wardrobe and wearing it incredibly well. I found that to be really refreshing, as someone who has kids. I don’t have the luxury of wearing ball gowns and tiaras. I’m often wearing parkas and distressed jeans. She’s been so excellent at building a uniform and a wardrobe based on a particular kind of a style and look.

When Meghan steps out wearing a piece, how exactly are you able to source everything that she’s wearing?

Because we’re crazy people!  [Meghan’s Mirror has close to 15 contributors as well as a professional stylist on the payroll.] There are a few ways we do it. The first is just by hours and hours of looking at designers and labels she’s worn in the past. For example, we’re very familiar with Aritzia’s lines, very familiar with Soia & Kyo, very familiar with Line. So when you see something she’s worn, you say, “It looks like a cut from this collection” and go from there. The second way is with the community online. People who are huge fans of her style will send us a note saying, “Oh my goodness, I have that coat, it’s last season from Mackage.” The third way is through our stylist, who has a photographic memory for pictures of clothes. It’s just remarkable. Then occasionally we get brands reaching out to us confirming that she’s worn something of theirs.

It's #tbt time with #MeghanMarkle to kick off summer. Last year, Meghan was featured in a spread for Good Housekeeping wearing a dress from @aritzia and these amazing shoes – still available! Details on the blog or at http://liketk.it/2rMzZ #liketkit @liketoknow.it

As someone who has blogged extensively about both royal wives, how do Meghan Markle’s and Kate Middleton’s styles differ?

Kate’s always been very aristocratic and posh, with the plaids and the Barbour coats. She will eventually be the wife of the King of England, and that has a lot of implications for what she is and isn’t allowed to wear. Meghan is joining the royal family at an older age (Kate married Prince William at age 29, Meghan Markle is currently 36), so she’s pretty comfortable with who she is. I don’t think we’re going to see a huge change in her style, because Prince Harry doesn’t have the same amount of pressure on him that William does. Meghan wears comfortable, casual, relatable clothes, which is something that Kate has kind of shied away from. For example, take Meghan’s engagement look vs. Kate’s. Kate wore a long sleeve dress and looked so shy and nervous. Meghan was bold enough to wear bare arms, which is something the royal family almost never does. I think TV prepared her for that in some ways.

We’ve all heard of the Meghan Markle effect in which an item of clothing she wears instantly sells out. How much of an impact does the blog have on the effect?

I like to think that we’re entirely behind it. (laughs) I don’t know that the standard media is able to identify the exact dress, coat, and shoes, at the level of detail, scrutiny and quickness that the blogging community is able to. Bloggers do drive an immense amount of interest in that. We’ll identify [each item] and tell people where to buy it at places where it’s still available. For example, if it’s sold out at Nordstrom and Neiman Marcus, it may be still available on The Outnet or Farfetch. That’s one way we drive sales for the brand. We also constantly monitor the traffic of where people go and what they’re interested in. For example, are they actually clicking on her Parosh engagement dress? Or are they interested in the white shirt she wore to the Invictus Games? Are they interested in her winter boots, or her $800 Altuzzura engagement shoes? We’re able to take stock of that. The answer, by the way, is the winter boots and the white shirt.

Is Meghan’s Mirror a full-time job for you at this point?

Both Christine and I have other jobs and do this on the side. But ‘on the side’ is currently looking like 30+ hours a week to be quite blunt and honest. It’s a lot. However it’s something we’re both very passionate about. I’ve found that when you’re doing something you love, it isn’t really work, if that makes sense.

Found! An oldie, but goodie. Meghan has worn this @kitandace cashmere sweater several times lately – get all the details on the #blog! (AMAZING find by #MeghansMirror stylist, @audreypischlsundays!)

In the end, why do you think people care so much about what the royals are wearing?

Deep down, at the end of the day, we’re fascinated by these women who seem to have it all. They always look put together, and seem to have a wonderful, inspired life. They wear glamorous clothes, go to glamorous events and have married into this family – deep down, we still want to believe that kind of fairy tale is possible and that there’s hope. Part of the reason I think Meghan and Harry have caused such a media frenzy is that we’re not exactly met with wonderful news stories on the front page of the New York Times every day. The world is a scary, uncertain, unstable place. With all the terrible headlines coming out, this is just a pure happy story. A girl meets a boy, they fall in love and are going to live happily ever after. I think people are really drawn into that love story and the happiness surrounding it.

Would you consider yourself Meghan’s biggest fan?

I’m a really big fan of the messages she stands for; the empowerment of women, the charitable causes she supports, and the fact that everyone should be comfortable with who they are. And I’m a huge fan of her style. I won’t deny that I have seen several of her pieces and said, “That needs to wind up in my closet.” I would say I’m a fan of her overall as a person 100%.

Photo by Chris Jackson/Getty Images
Get the best of FASHION in your inbox Thanks for signing up!
You’ll get the latest fashion, beauty and celeb news delivered right to your email Now, check your inbox to complete your subscription
We won’t ever use your email address for anything else
Want even more FASHION? Follow us on social media.