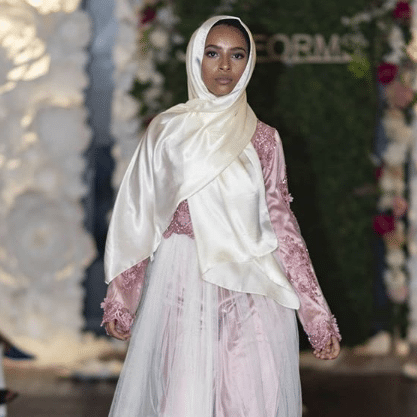 "You can be covered and stunning. That’s the positive representation we need to get out there."

As the modest fashion movement continues to make waves internationally, more and more people (especially millennials) are growing interested in the art of dressing modestly, as well as the deeper meaning to layers of clothing.

The International Modest Fashion and Design festival (IMFDF) held late last month in Toronto, showcased some of the best local design talent and highlighted the trends in the industry. It’s a nice reminder that dressing modestly is actually more than just a long skirt and shirt combo.

Now in its fifth year, the event is meant for people from different backgrounds and religions. It’s not limited to Muslim women, because anyone can choose to dress modestly or take an interest in this type of clothing. Nateka Pitter, founder of IMFDF, feels strongly about inclusivity, since stereotypes impacts every fan of modest dress. “All conservative women are considered frumpy, boring, oppressed the list goes on,” said Pitter. “Not just Muslims.”

“[But] you can be covered and stunning. That’s the positive representation we need to get out there. This year we had a Jewish journalist and Mormon blogger Emily Smith attend. They felt a part of the sisterhood. They too share the same values,” she said of the diverse range of people who attended.

Making new friends on the yacht at the International Modest Fashion & Design Festival in Toronto this weekend. @imfdfestival #IMFDF

As the designer behind Victorious Me, Pitter used to host her own fashion shows when she couldn’t find a wider platform. But she received such positive response to her shows, that she decided to create IMFDF.

In its five years the festival has grown to include famous modest fashion influencers like Dina Tokio and Chinutay.

Held at the Radisson Admiral Hotel at Harbourfront, IMFDF featured pop-up runways in and around the hotel. ModernNisa, a luxury modest fashion brand (with the dreamiest evening gowns) was heavily influenced by Middle Eastern style, said designer Naela Buran.

“[My style is] Middle Eastern. You know, they like extravagant, all the bling, everything to showcase a woman’s beauty. I like cultural stuff, I like traditional stuff, so I do all that and I’m venturing into modest bridal wear,” said Buran.

“It’s my third year here at IMFDF, I love being here and it’s a great opportunity here for all the sister to mingle,” she added.

Her show set a glamourous tone for the rest of the evening with various designers showcasing collections that ranged from casual, eco-conscious styles to children’s wear and formal dress. Some of the other labels included SAHA, JuwyriyaCMB by Hakeemahand more.

Natasha Saha, the designer behind SAHA, presented an exclusive collection at the event featuring vests that promoted Bangladeshi handi-work.

“It’s very elegant, very luxurious but we’re selling them at a reasonable price. The main aspect is to gain an audience and spread awareness for sustainable and eco-friendly fashion,” she said.

The festival also hosted a shopping bazaar where the attendees could access vendors selling items that ranged from hijabs to tulle skirts and abayas.

Notable vendors this year included Black Orchid, Unite Forms, Neicey ShopLa Modesty. The bazaar is a welcoming and lively environment where women from all around the world get to shop together and indulge in some of the latest modest fashion trends in a fashion genre that expected to grow by $368 billion by 2021, according to IMFDF.

“Since this industry is growing at an exceptional rate it’s really exciting for the focus to still be on the creative ingenuity this brings to the runway,” said the festival director Fatima Beg.