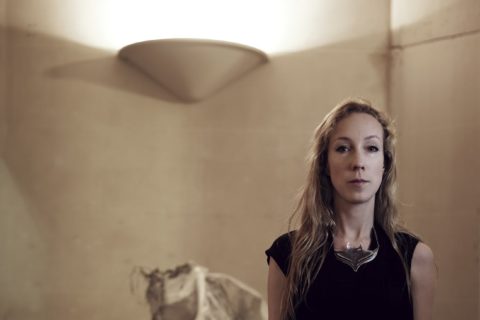 By Isabel Slone and Benjamin Reyes

There’s not many 33-year-old fashion designers who warrant their own career retrospective exhibition in a museum, but then again, Iris van Herpen is not like most fashion designers. We caught up the Dutch designer, who is often hailed as one of the most innovative and esoteric designers of the 21st century, while she was in Toronto for the opening of Iris van Herpen: Transforming Fashion at the Royal Ontario Museum. Van Herpen draws inspiration from sources as wide-ranging as biopiracy and synethesia and her work at the ROM appears alongside that of her friend and longtime collaborator, architect Philip Beesley. When Iris gestures towards a metal garment made entirely out of umbrella spokes that vaguely resembles a UFO, she says, “I had a lot of crows living next to my atelier and I was reading a lot about alchemy at the time.”

Her work is often associated with its proximity to cutting-edge technologies – van Herpen designed the first-ever 3D printed garment in 2010 – but it owes just as much of its spectacularity to her ability to create things by hand; “None of these pieces could have been made with a sewing machine,” she says.

Iris van Herpen: Transforming Fashion is on now until October 2018 at the Royal Ontario Museum.