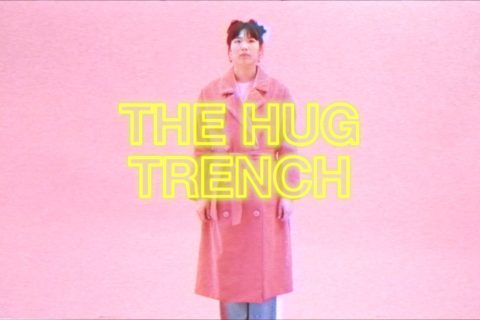 The prototype Hug Trench was designed to encourage hugging

When I lived in Asia, one of the things I liked most about it was how people would greet one another with a simple, but respectful head bow. In fact, handshakes there seemed awkward. A head bow was it. And it was perfect. But after two years there I started to crave something more. I needed touch, I needed a hug.

Which is why I love the concept of The Hug Trench. The Trench, was dreamed by Monki, a Swedish fashion brand owned by H&M, in partnership with marketing firm ODD Company. I didn’t know how much we needed  The Hug Trench until an informal office survey revealed that several colleagues have a complete lack of interest in hugs. I suspect technology is somehow eroding our desire for touch, a theory discussed as far back as 2012, when researchers warned how Internet habits were bordering on addiction. Like any addiction, technology is impacting our interpersonal relationships.Think about the last time you spoke with someone on the phone. Was it awkward and stilted? Think about how rude people can be in email, but completely nice in person? I think the same holds true for hugs. If we don’t do hugs, how do we know what we’re missing?

Granted, I come from a huggie/kissie family (Sometimes a little too kissie. At large functions I’m like enough, already) but in my world, hugs are big, loving and sincere. I don’t give out hugs all the time—this is not an air-kiss fake fashion thing. My hugs mean something. Also I’m a mom, so I’m the recipient of daily embraces that rival any narcotic you could convince a person to try. Kid hugs are the best. But I look around me and see people who I think would be so much easier to deal with if they just got a hug. And that says Jacob Hammar, of ODD Company, is the point.

“There’s a lot going on all around the world right now,” says Hammar. “Even though we understand that the Hug Trench can’t solve everything, we think it might inspire and encourage people to hug the ones they love, more often. A nice long hug from a close friend can be all you need some days.”

According to Psychology Today, a 20 second hug can increase oxytocin (the love hormone) levels, while decreasing cortisol (the stress hormone) levels. A great hug can also lower blood pressure and physically strengthen your heart. The Hug Trench creators have dubbed it the first hug “optimization” trench, something that might even break through to my non-hugging colleagues who Hammar says this coat was meant for.

“The difference between the Hug Trench and other trench coats is that it’s made to inspire you to hug the people you love,” says Hammar. “And if you love someone, you probably know if he or she is a hugger or not. And even someone who’s not usually a hugger tends to be okay with hugging a few special people.”

The concept coat includes strategically placed pockets (with cosy lining) for where your hands fall naturally. It also has a self-inflating shoulder pillow for resting your head on, in case of a prolonged hug. There’s also a soft velvet collar on which to place your face (Crucial! No one wants creases). LED lights indicate when you’ve got proper hug form, while a touch sensor activates a 20 second timer to secure the correct dose of oxytocin.

Is this overdesign? Is this even real? Yes, and no.

“There’s no plan to mass-produce the Hug Trench,” admits Hammar. “But I do want to take this moment to encourage your readers to keep on hugging ones they love.”

So there you have it. Perhaps The Hug Trench is the item you didn’t even know you needed. So just go on, reach out, and touch somebody.

To learn more about The Hug Trench, see below.