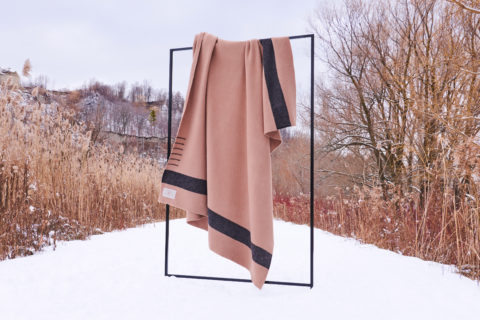 With a Royal Warrant from the Queen, the historic A.W. Hainsworth wool mill is where the iconic Hudson’s Bay Point Blankets, and princely wedding wear, are born.

In the brightly lit storeroom of the A.W. Hainsworth wool mill in Pudsey, West Yorkshire, England, tightly compressed bales of raw wool fleece are stacked like cordwood along a wall. It took three months for the fleece to arrive from Australia and New Zealand, and within 14 weeks those bales will be transformed into a neat pile of hand-finished Hudson’s Bay Point Blankets headed for Canadian homes.

It is fitting that the historic A.W. Hainsworth wool mill is where the Hudson’s Bay Point Blankets are made. The family-owned mill has been in business for more than 230 years or, to put it in perspective, since the reign of King George III, Queen Elizabeth II’s great-great-great-greatgrandfather. The factory, which is tucked at the end of a winding road, consists of a warren of buildings, some dating back to the 1800s. The famous Point Blankets date back even further: Hudson’s Bay Company has been manufacturing them in England since the late 1700s. Bestowed with a Royal Warrant from the Queen, the Hainsworth name is synonymous with quality woollen products—from the softest merino to the renowned Hudson’s Bay Point Blankets. A.W. Hainsworth is also a supplier of tunic fabric—the heavy, stiff cloth used by military regiments around the world. The British military’s vibrant scarlet was officially adopted in the 17th century and is still used today. In 2011, a beaming Prince William wore a scarlet frock coat at his wedding to Kate Middleton. For his brother’s nuptials seven years later, he and Prince Harry wore more subdued navy.

Tradition is also highly valued in the making of the Point Blankets. “The blend is painstakingly true to the original recipe,” explains Julie Roberts, marketing manager at A.W. Hainsworth. “What makes the Hudson’s Bay Point Blankets unique is that they’re made from a specific mix of seven different types of wool.”

Once the bales of fleece are opened, the fibres are mixed and blown from the blending room into the adjoining carding room through a network of Willy Wonka-like pipes. The carding machine untangles and cleans the wispy fibres as they get moved through a rumbling complex of rollers covered with fine wire. The wool fibre is then “rubbed” into unbreakable slubbings, which are tightly rolled onto bobbins to prep them for spinning. Roberts points out that the carding process at A.W. Hainsworth is a time-honoured one. “This carding machine is about 60 years old,” she remarks with a laugh. “But, as they say, ‘If it ain’t broke…’!”

Throughout the winding maze of rooms (“Make sure you follow the blue line or you’ll get lost,” says Roberts), there are signs of Point Blankets everywhere. Spools of recently spun indigo, yellow and red wool yarn—three of the signature colours of the renowned Multistripe Point Blanket—are nestled in metal containers in the spinning room. Outside in the hallway, there’s a lineup of oversized plastic bins filled with reams of unfinished striped fabric waiting to be washed and then shrunk. “This is the Millennium Point Blanket,” says Roberts while fingering the still-rough fabric. “It’s one of my favourites.” A neutral decor classic, the Millennium Point Blanket is ecru with varying shades of warm-brown stripes. Along with the Multistripe, the Millennium has been one of the most popular Point Blankets since its release in 2000.

A history of Hudson’s Bay and the Point Blankets: 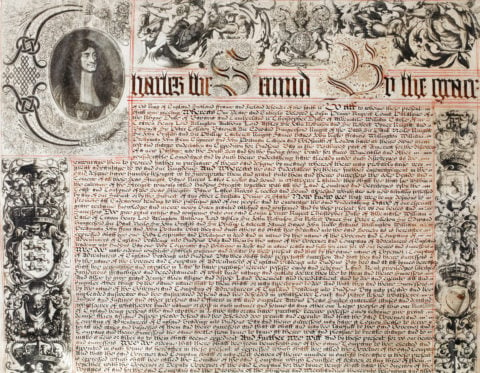 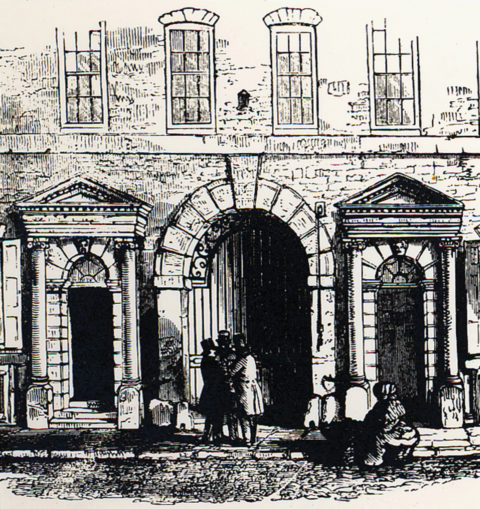 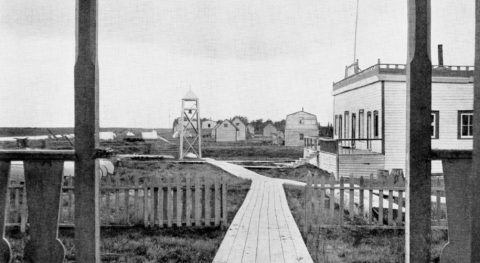 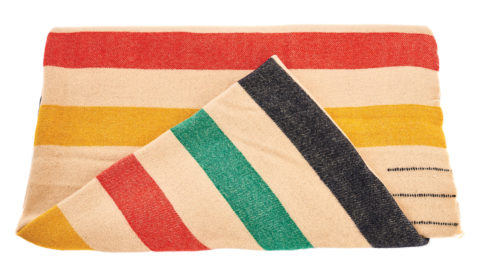 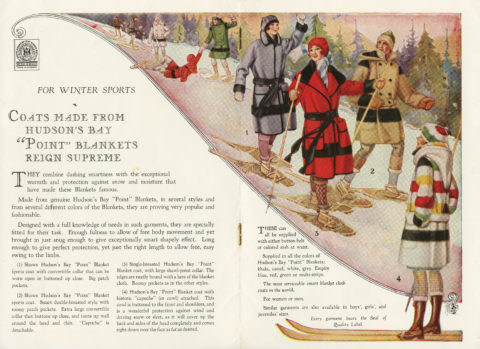 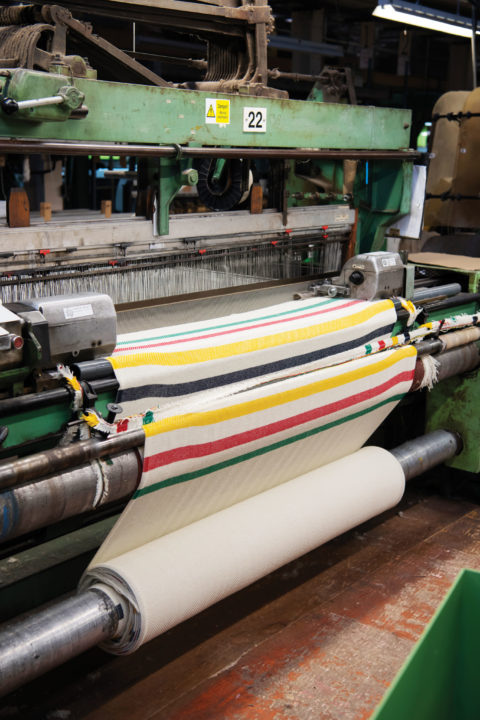 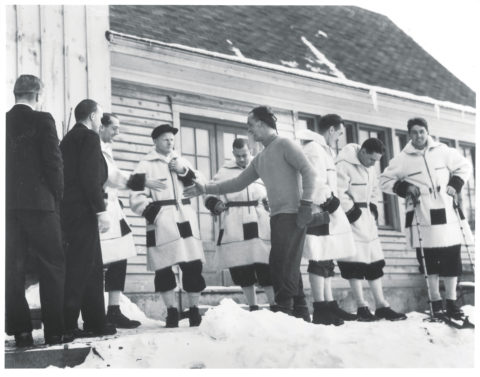 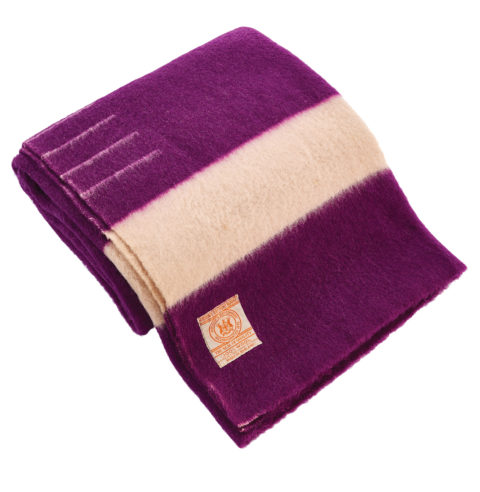 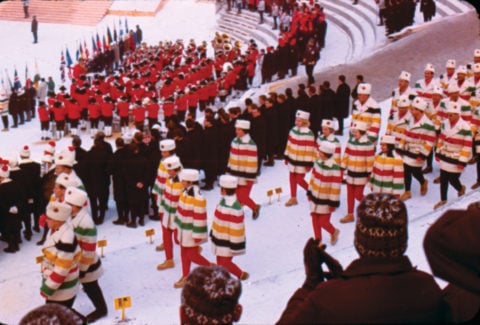 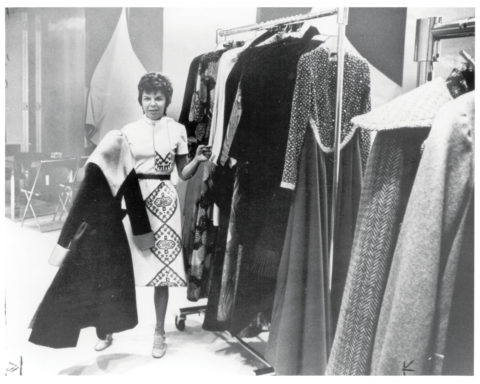 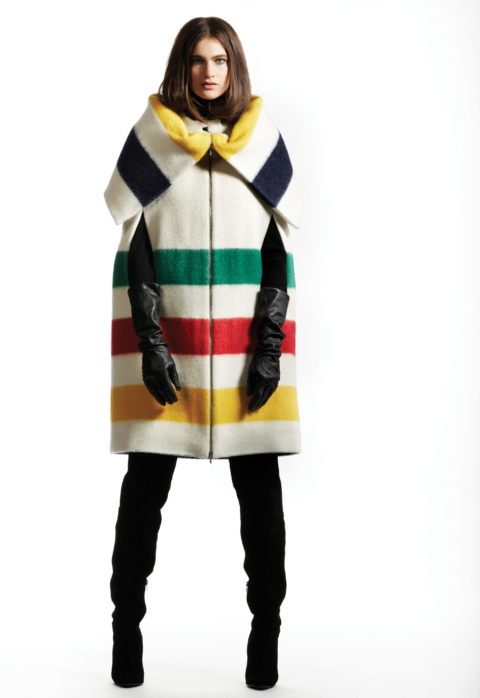 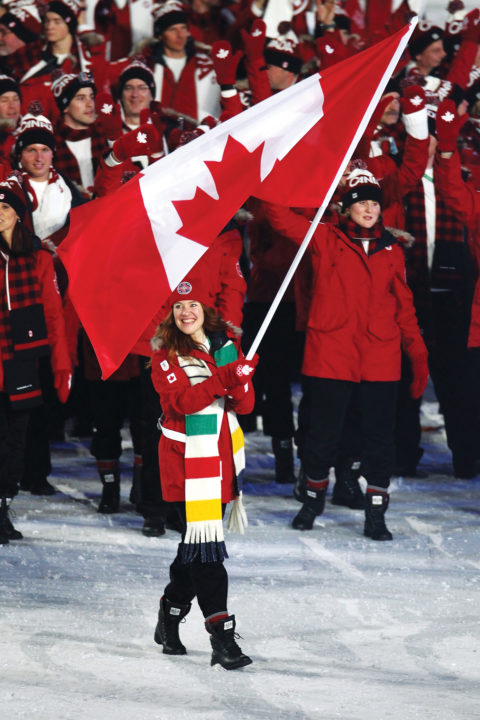 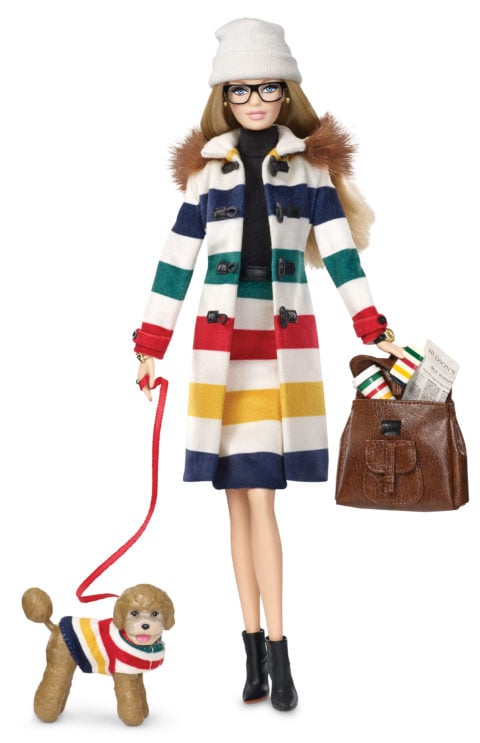 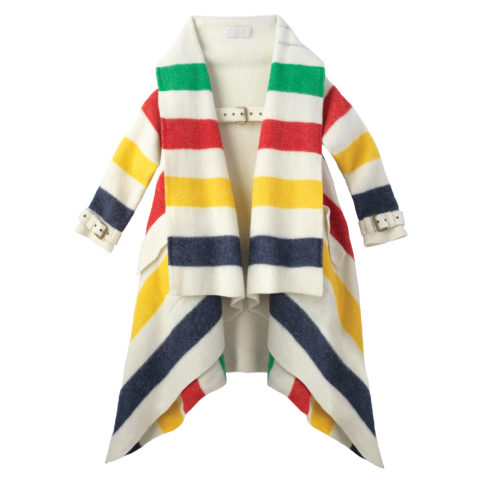 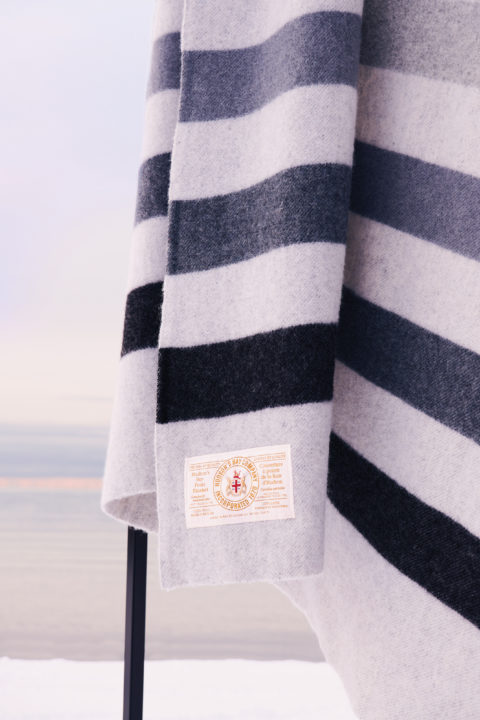 A “proposal of the terms” delivered to HBC’s Board suggests that Point Blankets would help improve inland trade in Canada.

The first 500 Point Blankets in white, scarlet, green and blue are shipped to Fort Albany on James Bay.

The first order for the Point Blanket in the now-iconic multi-stripe pattern is shipped to Canada.

Blanket fabric is woven in England and shipped to Winnipeg to produce HBC Point Blanket outerwear for men, women and kids.

A purple Hudson’s Bay Point Blanket is released to celebrate the coronation of Queen Elizabeth II.

The Hudson’s Bay Point Blanket coat is worn by Canadian athletes at all three Winter Olympics.

A collectible Hudson’s Bay Barbie is released, with the doll and a miniature poodle wearing coordinating stripes.

After the slubbings have been spun into yarn, the next step is warping. A mother-and-daughter team work in unison arranging yarn threads in long lengths of equal tension to ready them for weaving. Nicola Gartland, 29, has been working at A.W. Hainsworth alongside her mother, Jeannette, since she was 18. Walking back and forth along the thrumming warping machine, Nicola checks each section of warp threads as they wind. “I tried working on the warping machine once, and it was a disaster,” says Roberts, explaining how precise and skilled you have to be to warp thread. “Nicola had to untangle the mess I’d made.”

Once the thread is warped, the magic begins in the weaving shed. The warp and weft threads interlace on the weaving machines in mesmerizing fashion. On several machines, the familiar green, red, yellow and then indigo are woven into stripes on an ecru background to create the fabric for the iconic Multistripe Point Blanket. One row over, three machines are weaving limited-edition Gold Point Blankets, one of six special patterns that has been launched to celebrate Hudson Bay Company’s 350th anniversary. Unlike the Multistripe, where the wool for the coloured stripes has been dyed before it is woven, the Gold Point Blanket, a re-release from the 1929 Point Blanket Pastel Series, is woven first and then overdyed to get its intense marigold hue.

Although Hudson’s Bay Point Blankets are a regular fixture on the production lines at A.W. Hainsworth, the legendary mill also supplies metres of custom-ordered fabric to fashion houses like Chanel and Alexander McQueen. A.W. Hainsworth Doeskin, a delicate wool fabric, is named for its smoothness and sheen. A favourite of designers, A.W. Hainsworth Doeskin can be made in any colour specification. The late Karl Lagerfeld used A.W. Hainsworth’s black Doeskin for Chanel’s Pre-Fall 2015 collection. “Karl Lagerfeld loved working with it,” says Roberts. “He was so happy with it that he had it made into a cravat.”

A precise attention to detail is one of many reasons A.W. Hainsworth is the fabric source for so many international brands. Nowhere is that more evident during the production of the Point Blankets than when each “point”—lines woven at the edge of every blanket that signify the blanket’s overall finished size—is hand-cut with small scissors. The fabric is then examined closely, and any imperfections, no matter how minuscule, are fixed with a tiny pick. Once it has been approved, the fabric is washed and then dried at high heat. The drying process shrinks and condenses the wool in order to create the characteristic soft and dense texture of the Point Blanket. The last step before the labels are sewn on is the most satisfying: Two team members work together rhythmically as they roll out the bolt and then measure, cut and rip the fabric into individual blankets. The raw edges are left unfinished.

With each blanket finally labelled, tagged and zipped into its individual plastic case, it’s hard to believe that the starting point was a bag of fluffy raw fleece. But what isn’t hard to imagine is how well loved every Hudson’s Bay Point Blanket will be when it reaches its final destination. Whether it’s a special-edition Camel Point Blanket folded at the end of a bed, a classic Multistripe Point Blanket tossed over the arm of a chair or a Scarlet Point Blanket worn like a serape on a chilly night, there’s no doubt that each one is a lasting treasure.

Want more HBC in your home? Shop some of our favourite stripe pieces below… 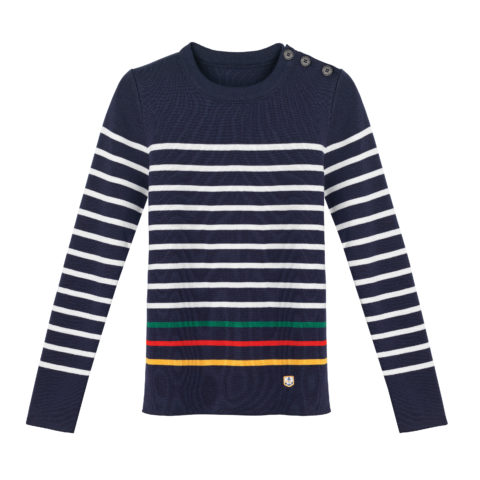 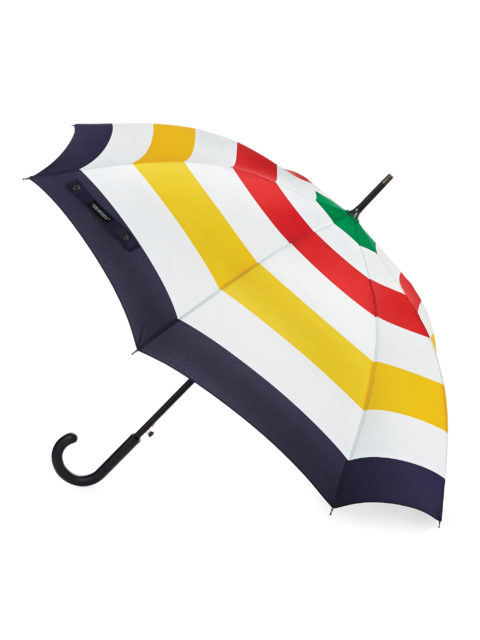 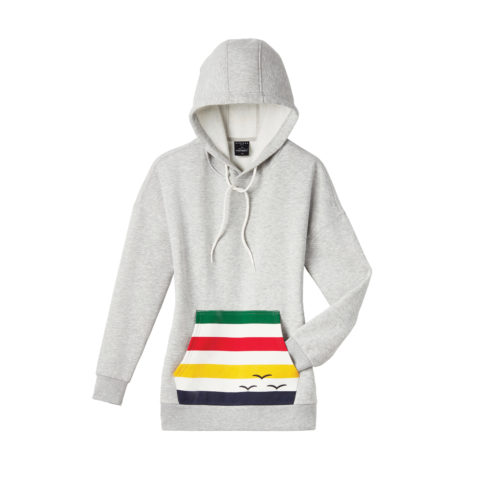 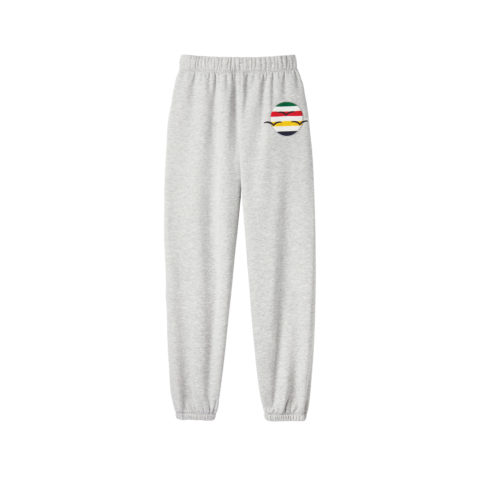 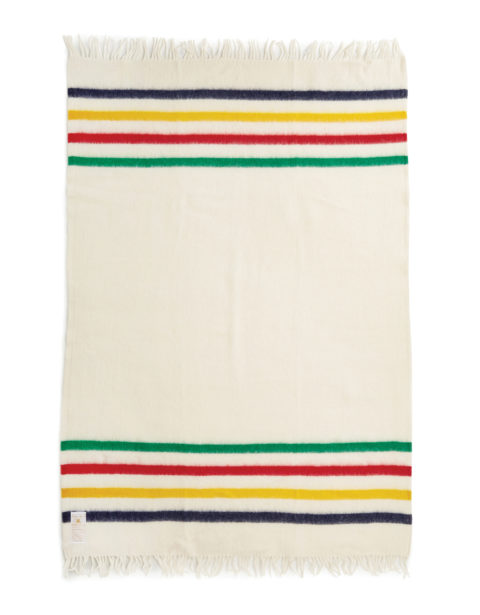 Photograph courtesy of HBC
Get the best of FASHION in your inbox Thanks for signing up!
The latest fashion, beauty and celeb news delivered right to your email #FASHIONforall Now, check your inbox to complete your subscription
We won’t ever use your email address for anything else
Want even more FASHION? Follow us on social media.