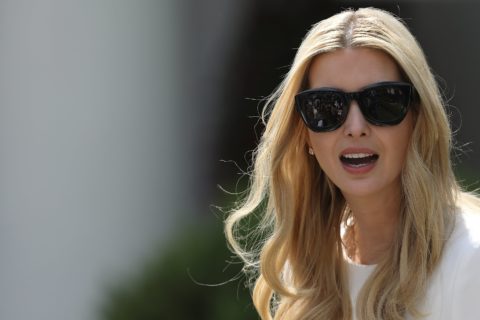 It’s fast becoming a familiar refrain. “Hudson’s Bay is phasing out this brand through the fall based on its performance,” a statement from the company asserted, in regards to the eponymous clothing and accessories line by Ivanka Trump, President Donald Trump’s daughter, that was pulled from its website on Friday.

Other retailers have had similar responses since President Trump’s inauguration, most notably Nordstrom, which told Forbes back in February 2017 that “We’ve said all along we make buying decisions based on performance. In this case, based on the brand’s performance, we’ve decided not to buy it for this season,” and Neiman Marcus, which prefaced the dropping of her jewellery line by saying, “Based on productivity we continuously assess whether our brands are carried in stores, on our website, or both.”

It does seem like sales of Trump’s line have been declining since her father took office. According to the e-commerce tracking firm Edited, reported Racked last fall, “the rate of items selling out online at full price rose 32.8 percent for the overall US market between January and July. During the same time period, full-price sellouts were down 23.5 percent for the Ivanka Trump brand.” That said, the decision to drop Trump’s line by these major retailers is surely influenced in no small part by consumer-driven campaigns like #GrabYourWallet, which urges consumers to boycott brands and companies that do business with the Trump family. Although HBC’s decision was reportedly made last fall, there has been rising social media pressure on the company to sever business ties with the fashion line in light of the Trump administration’s tariffs on Canadian steel, his remarks about Prime Minister Justin Trudeau following the G7 conference, and the mounting immigration crisis at the United States’ southern border.

Thanks to every person who contacted Hudson's Bay and encouraged them to stop carrying the toxic Trump brand. #GrabYourWallet + #Baycott = ? ? https://t.co/KHE3rKK9xj

When asked for further comment, a Hudson’s Bay representative responded over email with a pre-approved statement: “Hudson’s Bay is phasing out this brand through the fall based on its performance. As part of our regular course of business, we review our merchandise offerings and make appropriate changes.”

At the end of the day, what drove the company’s decision isn’t important. Hudson’s Bay is no longer complicit in the financial prosperity of the Trump clan and ultimately, that’s what matters.

Photography via Win McNamee/Getty
Get the best of FASHION in your inbox Thanks for signing up!
The latest fashion, beauty and celeb news delivered right to your email #FASHIONforall Now, check your inbox to complete your subscription
We won’t ever use your email address for anything else
Want even more FASHION? Follow us on social media.