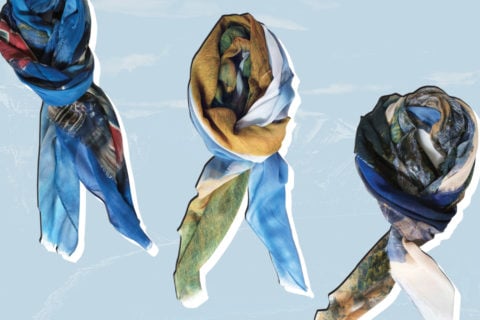 We meet founders Clare Hodgetts and Kemp Edwards to find out more about the business.

“Kemp and I have known each other since grade one,” smiles photographer Clare Hodgetts, co-founder of InFocus Canada, a B.C.-based company that designs and develops an ethical line of silk scarves. “The idea for InFocus was born in 2016 from the vision of wanting to show photos in a new way, on a new medium, and give back to charity. The idea to combine fashion and photography was the inspiration for the project right from the start,” explains Clare. “The fashion part was an easy choice for me because it’s what I was already doing,” says Kemp Edwards, Clare’s friend and business partner. “Making it sustainably and ethically was my mandate and I had the sourcing and production channels already developed to see through on that vision. Photography was a natural fit once Clare agreed to come on board.”

After a decade of working in the action sports industry as a sales and marketing director, Kemp approached Clare (who was working for Coast Mountain Photography at the time) with the idea. “I was disappointed that the uptake on sustainable materials in that industry was negligible,” he says. “I believed the best way to lead was to embrace social and environmental ideologies and showcase them through design, or ‘wearable art.’ To enhance the engagement of everyone involved, we asked the photographers to select a charity of their choice to give back to,” says Kemp.

The first line, the BC Collection, showcased 13 images from four British Columbia photographers, “Dee Lippingwell, Chris Collacott, Owen Perry and me . The images were then transferred onto scarves made from 100 per cent recycled material,” explains Clare. “To kick off the collection, we held a one-night gala at the Imperial in Vancouver. Each photographer printed and framed 10 pieces of artwork, which we hung at the event transforming the Imperial into an art gallery. Each photographer chose a charity to support – Surfrider Foundation, Take a Hike Foundation, Pacific Wild and Directions Youth Services – and a representative from each was there. We sold scarves and donated 50 per cent of the proceeds to the charities. It was an amazing night and an awesome start to InFocus Canada.”

After the success of the first line, Clare and Kemp decided to do a second collection that would feature “a photographer from each province and territory, as well as a First Nations artist, who then submitted a landscape image. It’s a wonderful celebration and snapshot of Canada in photos,” Clare says with pride. “Again, each photographer selected a Canadian charity to support and donated 10 per cent of each scarf sale to their chosen charity.”

InFocus is now entering its fifth year with their third line, the Athena Collection. “The progression has been an organic process. Our plans for the collections develop with the business, and so rather than focusing on an annual collection, we’re expanding as the business grows,” says Clare. “We’re overwhelmed with how well the collections have been received. Once people have one of the scarves in hand, they’re amazed by how soft they are and surprised that they’re made entirely from post-consumer recycled plastic. Customers love that they’re supporting a charity and an artist with their purchase. We look for the right partners, the right charities and the right images. All those things must align before we move forward,” adds Kemp.

The hope is to expand and explore collaborating with artists in different mediums – painters, illustrators. “We’d love to host another gala night in a different market. We’d also like to explore collaborations with larger brands looking for a way to give back. A franchising model might work where we could support a community of people running this same program in their individual territories,” says Kemp.

“Working collaboratively with charities has deepened our relationships with people and organizations effecting to better the world. We’ve learned so much about the work they do. Our success increases when the charities get on board and help promote the scarves. To date, we’ve raised money for eighteen charities, and have another nine planned for the Athena Line,” says Clare. “Raising money for charity was the impetus behind the whole idea of InFocus,” adds Kemp. “It’s a critical component of the project and it ties everything together – the artists, the subject matter and the stories we’re hoping to share. We elected to give 10 per cent of the sell price of the scarves back to charity so that everything is transparent. 10 per cent of sales creates a meaningful contribution for each charity and as a whole enables us to raise about $15,000 every time, we put out a new line. Everyone profits from the exposure – no pun intended.”

Scarf images courtesy of InFocus. Mountain image: "ARCTIC FJORD", NUNAVUT by MICHELLE VALBERG. Design by Danielle Campbell.
Get the best of FASHION in your inbox Thanks for signing up!
The latest fashion, beauty and celeb news delivered right to your email #FASHIONforall Now, check your inbox to complete your subscription
We won’t ever use your email address for anything else
Want even more FASHION? Follow us on social media.