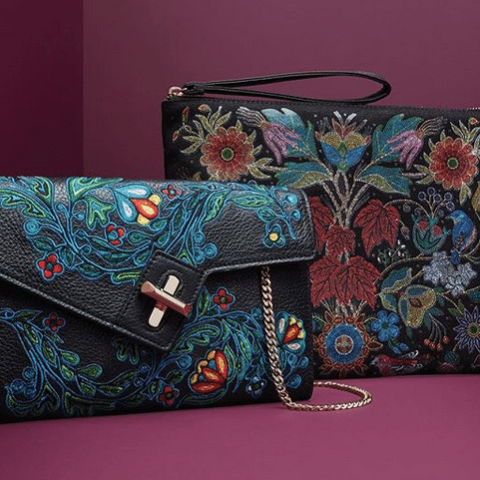 If you’ve ever learned a foreign language or read a book that has been translated, you’ll understand the meaning of the term “mother tongue.” We all simply understand things better in the language we were raised. There are nuances to words, turn of phrases that mean one thing to one person, and something else to a person in a different language. And when one is left without language there are stories that will never be shared.

For Canada’s indigenous communities, movement off ancestral lands and upbringings in residential schools meant the loss of traditional language, and by default, crucial links to their histories have been lost. The topic of traditional language is a flashpoint for Indigenous people all around the world, and here in Canada, there is a thriving grassroots movement intent on reclaiming indigenous dialects for young people.

This is why, three years ago, Metis artist Christi Belcourt (along with Isaac Murdoch and Erin Konsmo) founded The Onaman Collective in Northern Ontario.  This community arts group is “dedicated to the resurgence of Indigenous ways of being and knowing.” That includes language immersion workshops, and knowledge about life on the land. Demand is such that the collective is looking to build a year round structure to make their activities available to more.

“We bring youth and elders together on the land, for culture, language, and traditional and community arts,” said Belcourt who was in Toronto to talk about Holt Renfrew’s latest H Project launch, the ela X Christi Belcourt  limited edition handbags.

According to Belcourt The Onaman Collective is run completely by volunteers without government funding, so organizers have sold art or held auctions to finance operations.

In our communities there is a rapid decline of language speakers. We see the urgency to create space where the language can be learned.

Belcourt contintued to say the facilities are not fancy or extravagant but done for the love future generations. Belcourt, who lives in Espanolo, Ontario has artwork hanging in the National Gallery of Canada, in Ottawa, and the Art Gallery of Ontario, in Toronto. But she’s hardly a stranger to fashion. Luxury Italian fashion house Valentino drew inspiration from Belcourt’s piece “Water Song” for their Spring 2016 collection.

The limited edition ela X Christi Belcourt collection is available in stores and online at holtrenfrew.com; $75 from each Mini MILCK Clutch($395) and $10 from each Editor’s Pouch ($50) will go towards supporting The Onaman Collective.

Photography via Instagram/@alexwestonholts
Get the best of FASHION in your inbox Thanks for signing up!
The latest fashion, beauty and celeb news delivered right to your email #FASHIONforall Now, check your inbox to complete your subscription
We won’t ever use your email address for anything else
Want even more FASHION? Follow us on social media.