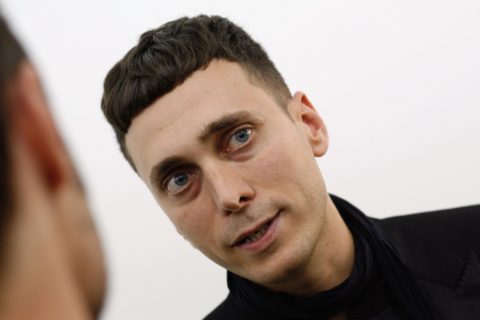 When I found out that Hedi Slimane was appointed the Artistic, Creative and Image Director and overall Grand Poobah of Céline on Sunday morning, I was still in the precise fog that combines jet lag with staying up too late watching early 2000s viral videos. But the news immediately cut through the fog. Hedi Slimane is a superstar designer and Céline is a supernova brand and the pairing set off the equivalent of a grand fireworks display in my brain. But Slimane’s swaggering design aesthetic doesn’t immediately jive with my own perception of Céline as purveyor of a quiet, muted yet powerful sensibility. To help make sense of this unholy pairing, I asked fashion critics for their thoughts on the appointment and what they see in store for Céline.

Haley Mlotek, Writer for The New Yorker and The New York Times, former editor of The Hairpin

Could anyone follow Phoebe Philo at Céline? I’m very rarely surprised by the never-ending game of musical chairs the major conglomerates have been playing, but Hedi Slimane — the only word I can think of to describe how I felt is just agog. Now that Phoebe Philo is not at the brand anymore I’m catching myself thinking of her as a saint, when really she was something better — an intelligent and intuitive clothing designer who made clothes women really, really wanted to wear. I loved her concept of minimalism: not an absence of decoration, but a deliberate, elegant series of decisions. Every colour and every texture and every shape had a purpose and a reason and a place.

I don’t think the next designer of Céline had to be a woman necessarily, but I had hoped it would be someone with a demonstrated interest in making what women wanted. In the past I’ve found Slimane’s work to be too literal. His references are so on the surface that his clothing, to me, looks like costumes — “California Grunge” was the perfect example of this— and I find a lot of the individual items to be over-designed, weighed down by excessive flourishes and accessories. His previous work has been very, very different from Philo’s Céline, let’s say, and so it’s reasonable to assume that whatever comes next for the brand under his total direction will be a significant departure. I don’t know! We’ll have to wait and see; maybe he’ll surprise us all, and jerks like me will recant.

Under the direction of Phoebe Philo, Céline has been to slow to adopt an online presence, and with Slimane, I suspect that will quickly change. Not only will the designer usher the French fashion house into the digital era, he’ll likely bring a younger, millennial-friendly fandom to the brand. Slimane’s obsession with youth culture always brings mixed reactions from the industry, so I’m definitely interested to see how polarizing his debut collection in September will be.

It’s also very ambitious of LVMH to expand Céline’s product offerings with menswear, couture and fragrances, but if there’s anyone with a proven track record to boost sales for a luxury conglomerate, it’s Slimane. During his tenure at Saint Laurent, he doubled the label’s business, which became one of Kering’s biggest money-makers until it was finally surpassed by Gucci last year.

I’m not necessarily surprised by the appointment on an aesthetic level, but by the scope of Slimane’s responsibilities. Especially at a time when designers have only just—finally—started to push back on the challenging show system schedule expectations and accelerated product cycle of the fashion brands and couture houses they oversee. Slimane coming in as Céline’s artistic, creative and image director seems ambitious. The past couple of years have seen a lot of churn in the top jobs as well as burnout. I have to wonder how sustainable it will be to direct the creative communications, design the news stores and brand launches as well as keep up with the punishing clothing schedule of women’s — and now men’s — collections.

There’s something so dispiriting about the idea of a man so taken with his own supposed genius replacing this wonderful, idiosyncratic, feminist designer like Phoebe Philo. Hedi Slimane may sell boatloads of merch, and his skinny suits and rock ‘n roll-inspired duds may look “cool,” but they’re derivative ideas designed for cliches, not actual women. Philo’s Céline — and her Chloé before that — was so wonderful and resonated with so many women because Philo simply designed clothes that she — and the women in her life — wanted to wear. And because she designed for real women, not only were her clothes thoroughly modern, but were suffused with humanity and personality — just the right amount of weirdness and her own particular tastes. That kind of unconscious idiosyncrasy is so rare in fashion today, where every brand is at least partly controlled by a big conglomerate, and shorn of its uniqueness and life in an effort to just move as much product and get as many “impressions” as possible.

It seems like an odd pairing, and while my natural inclination is to completely dismiss it outright, I’m going to remain tepidly curious. My confusion comes from their two totally distinct aesthetics: I think of Hedi’s work as ‘80s rock and roll, and Céline makes me think of clothes that come from the future. How will both of those reference points be reconciled? Can they? Hedi at YSL was very self-aggrandizing; it became entirely about him and his ideas. Uninspired as they were, Hedi’s clothes do sell like hotcakes, so Céline will stand to make gobs of money. I am intrigued by the idea of a Céline fragrance.

It’s thrilling that Hedi is returning to the LVMH orbit in a position tailor-made to both amplify and amalgamate his wide-ranging talents into a singular vision. As the founder of Dior Homme, his precise tailoring left an indelible imprint on menswear and the culture surrounding it; I know I am among many women who still covet Hedi’s lean silhouettes and sleek androgyny from his men’s Dior collections. Phoebe Philo’s intuitive understanding of women’s desires and the times we live in completely revolutionized both a dying fashion house (Céline) and the luxurious, uncomplicated freedom that epitomized the Obama era aesthetic and completely shifted the way we want to dress. In a post-recession rift in what sort of values and codes we ought to adhere to, Philo made Céline an encapsulation of the women we aspire to be and gave us the tools to succeed. How Hedi will carry the torch onward into the perilous times ahead—envisioning Céline through his own lens and expanding the restored house’s repertoire with potentially game-changing, inaugural takes on what Céline menswear and couture ought to be—strikes me as one of the most eagerly anticipated moves of our generation, one that has the industry, its customers, and fans alike all waiting with bated breath.