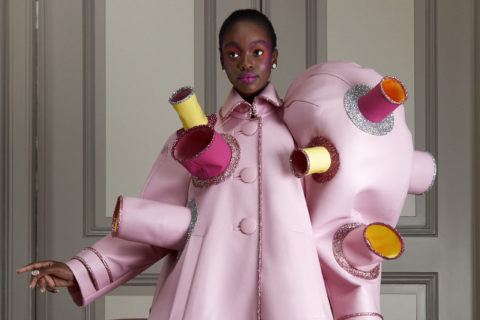 All the Digital Fall 2020 Shows from Haute Couture Fashion Week

See the latest designs from some of the world's top houses in a new digital format.

Haute Couture Fashion Week is officially underway for the Fall 2020 season in Paris – though, not as we usually know it. With travel and gatherings still restricted due to the COVID-19 pandemic, the annual event cancelled its physical shows and has gone digital for the first time. Below, take your front row seat to see the 2020 couture shows from some of the world’s top luxury houses – no passport necessary.

Dior presented its Couture 2020 collection in a video storytelling format. The short surrealist film – titled Le Mythe Dior – was the work of Matteo Garrone and features miniature versions of the house’s 37 newest couture creations – an homage to Théâtre de la Mode, the 1945 event which saw some of Paris’s most talented couturiers create miniature doll-size versions of their creations to promote French couture across the globe during the war. According to the official show notes, creative director Maria Grazia Chiuri was inspired by “the journeys of five indomitable, magnificently inspiring figures of the Surrealist movement: Lee Miller, Dora Maar, Dorothea Tanning, Leonora Carrington and Jacqueline Lamba” for the collection. Discover it below:

Olivier Rousteing took to the Seine River for the 75th anniversary couture show for Balmain. Models wore pieces from the brand’s couture archives, and were joined by a 50-person strong dance troupe, as well as French singer Yseult. It was livestreamed exclusively on TikTok and you can catch clips from the show on the brand’s account.

Dolce & Gabbana usually hosts its annual Alta Moda collection show in a far-flung Italian destination, but this year, it’s gone virtual. In an interview, designer Stefano Gabbana saud te collection is “a series of pieces dedicated to [its Alta Moda] customers and the essence of the Italian summer.” Discover the decadent men’s and womenswear collections below:

Alexis Mabille created a runway in a fuchsia pink room with a single model to showcase his new couture collection which included lamé jersey dresses, showstopping coats, statement jumpsuits and more. The colours were bold and the textures (think velvet, crepe, jersey, organza, satin) made for beautiful movement. As with many other designers on account of the global pandemic, Mabille was unable to order new fabrics and had to use what he had available in his atelier for this collection which he described in a press release as “a very enriching experience.” As for his inspiration for the collection, called “Attitude”, Mabille said, “More than ever, elegance and sensuality are the red thread woven throughout this collection, along with my long-held respect and love for the female form. It’s my vision of an attitude, a call for optimism, an invitation to smile.” Discover it below:

Virginie Viard showcased a new side of her design talent in Chanel’s new couture collection. A decidedly rock-inspired lineup, the collection included heavy embellishments and ’80s-inspired party dresses. There’s plenty of bright tweed and ruffle accents, too. According to WWD, Viard took her inspiration from the late Karl Lagerfeld – specifically, his 18th-century design phase. “It makes me think of image I have of him with friends before I knew him, when he would often host balls, dinners and parties. People would really dress up.” See the collection below:

Though it remains to be seen when we might see these designs grace a red carpet, Giambattista Valli once again served up a slew of photo-worthy creations in his latest couture collection. The collection was inspired by and dedicated to the world of couture, with fantastical gowns made with multi-layered tulle, draped mousseline and chiffon and adorned with larger-than-life bows. As for the colours, the designer took his inspiration from Paris: “Colours include red like the lipstick marks often found on empty cups on the tables of Parisian cafes, black like the notorious ‘Petite Robe Noire’, pink like the wild roses growing in the city’s gardens and ivories like the mouldings that adorn windows and ceilings.” See the incredible pieces below:

If there’s two designers who know how to put a fun, relatable spin on couture, it’s Dutch designers Viktor & Rolf. This season, the duo has created just nine looks for its couture collection, presented in three groups that reflect the “three mindsets” of the current time. The collection is presented in video form with a brilliant voiceover from MIKA narrating the inspiration behind the pieces, as well as the design elements. Given our at-home reality, there are satin nightgowns and luxurious bathrobe-inspired designs on offer, as well as a trio of coats that ensure you’ll remain six feet away from others thanks to their elaborate embellishments. This is certainly a collection for the history books. Discover it below: