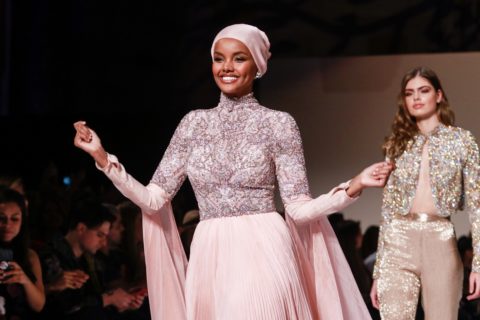 Halima Aden makes history as the first model to wear a hijab and burkini for Sports Illustrated Swimsuit: https://t.co/8WFD4hHmiH. pic.twitter.com/OsBthnjoLY

Halima Aden’s story is filled with firsts. In 2016, the Kenya-born, Minesota-raised 21-year-old model became the first-ever contestant in the Miss Minnesota USA pageant to adhere to a modest dress code. A year later, she went on to become the first hijabi model to ever sign a major modeling contract. Now she’s breaking ground again as the first Muslim model to appear in a burkini in the salacious Sports Illustrated swimsuit issue. “Growing up in the States, I never really felt represented because I never could flip through a magazine and see a girl who was wearing a hijab,”Aden says in a promotional video. She describes the experience of modelling for Sports Illustrated as a “dream come true.” Considering that historically, the swimsuit issue has been a collection of softcore wank material of busty white women, it’s refreshing to see the cultural mood shifting toward one where all expressions of beauty are honoured. (New York Times)

Model Dies After Collapsing on the Runway in Brazil

Tales Soares, a 26-year-old male model who worked under the professional name of Tales Cotta, died in a hospital after stumbling and collapsing on a runway at Sao Paulo Fashion Week. Soares was known as an exemplary model and an advocate for LGBTQ rights. A video of the event depicts audience members jumping out of their seats to help Soares, whose fall was just out of frame. Doctors have speculated that Soares may have suffered from an undiagnosed congenital illness. The model’s sister, Gabriella Gomes, told British tabloid The Sun, “Me and my mother (Heloisa) spoke to Tales by video call before the parade and he said he was well and said he had just finished eating a carrot… My mother called to find out what was going on, they said that Tales had been taken ill and hospitalized, and shortly after, the organization called again and said he had died… We’re very scared and devastated by what happened. He was very healthy, ate healthily and exercised every day. He did cross fit and yoga.” (CNN)

Cher and designer Bob Mackie, 1974. Bob Mackie Will Receive the Geoffrey Beene Lifetime Achievement Award From the CFDA. Photo: Ron Galella / Getty Images Via @vogue ‘With the announcement that Bob Mackie will receive the Geoffrey Beene Lifetime Achievement honor this year, the bar for this CFDA Award has just been raised. Not many designers or costumers have been influencing popular culture for as long, or across as many media, as the 80-year-old Mackie has. And talk about having a moment: This week Mackie was also nominated for a Tony Award for his work on The Cher Show.’ . . . . . #bobmackie #cher #tonyaward #CFDA #GeoffreyBeeneLifetimeAchievement #dressdesigner #thechershow #1974 #cherandbobmackie #cherattheoscars #bobmackiedress #1970sfashion #70sfashion #1970sstyle #1970smakeup

Anyone who can recall the jagged crop top and feathered fright wig Cher wore to the 1986 Oscars will be familiar with Bob Mackie. The 80-year-old designer began working with Cher in 1967 and is responsible for the star’s most memorable getups, from the aforementioned fright wig to the sequin-bedecked “naked dress” she wore to accept her Oscar for Moonstruck in 1988. In honour of his cultural contributions, Mackie will be presented with the Geoffrey Beene Lifetime Achievement Award at the 2019 CFDA Awards on June 3rd. “I’m amazed and delighted,” was the simple quote he provided to WWD after the award was announced. As someone responsible for some of the most unquestionably iconic looks of the 20thcentury, we can’t think of a more deserving candidate for the award. (WWD)

Art by #HarmonyKorine is interspersed throughout the limited-edition book ‘Gucci by Harmony Korine’ together with photographs by the director with the #GucciPreFall19 collection by @alessandro_michele. Discover more about the book through link in bio. #AlessandroMichele Images shot in @pompeii_parco_archeologico and @ercolanoscavi
Courtesy of the Ministry of Cultural Heritage and Activities, Archaeological Parks of Pompeii and Herculaneum.

Gucci is Releasing a Photo Book by Harmony Korine

Director Harmony Korine is responsible for some of the most discomfiting films of the 20th century. Gummo, Julien Donkey Boy, and the literally-titled Trash Humpers all traffic in queasy absurdist realism, daring audiences to look away from his horrible yet fascinating visions. He’s taken a turn towards the mainstream in the last five years, casting Selena Gomez in the Girls Gone Wild-inspired Spring Breakers and Matthew McConaughey in his latest slacker fever dream, The Beach Bum, but his latest move might be his most family-friendly work to date. Gucci asked the director to shoot their pre-fall 2019 collection at UNESCO World Heritage sites in Italy and produced a photography art book from the body of work. Korine’s quote about the book is uncharacteristically tame: “Working with Alessandro Michele was such a great experience. It was a chance to shoot in historic places such as the ancient towns of Ercolano and Pompei, which are so inspiring. The special atmosphere made it a unique experience.” The book will be available in June at Gucci’s new bookstore in SoHo as well as Gucci Garden in Florence. Here’s hoping the contents of the book are more compelling that the quote. (WWD)

Photo by MediaPunch/REX/Shutterstock
Get the best of FASHION in your inbox Thanks for signing up!
The latest fashion, beauty and celeb news delivered right to your email #FASHIONforall Now, check your inbox to complete your subscription
We won’t ever use your email address for anything else
Want even more FASHION? Follow us on social media.