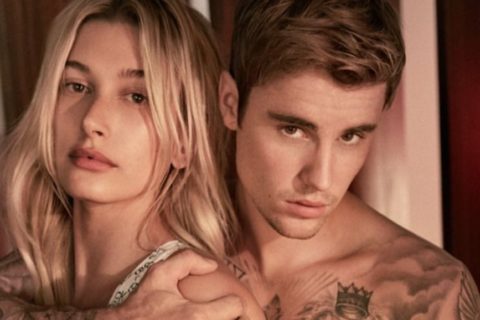 Just one week after their official wedding in South Carolina, Justin and Hailey Bieber are making headlines again – this time, thanks to their first joint advertising campaign.

The genetically blessed duo fronts Calvin Klein’s new CK50 collection, which celebrates the brand’s 50-year anniversary. Shot by Glen Luchford, the Biebers can be seen sporting monogrammed pieces in his and her silhouettes, and this aesthetic carries through the full collection which also includes sweatshirts, dresses, tees and denim.

The (technically) newlyweds are joined by friend Kendall Jenner and A$AP Rocky (as well as Troye Sivan, Liu Wen, Parker Van Noord and Rebecca Leigh Longendyke) in the new campaign, which celebrates the brand’s influence on pop culture over the past five decades.

The print campaign is also accompanied by a 90-second video that shows the stars in a variety of settings. First up, the Biebers are shown sitting on a couch watching the Apollo lift-off, followed by A$AP Rocky and Kendall Jenner on their way to Studio 54. Troye Sivan is then seen taking part in a subway dance-off, before the clip cuts back to the Biebers in a studio rocking (and making…) out to EMF’s Unbelievable. It ends with A$AP doing crunches and Jenner taking a selfie.

The campaign comes hot on the heels of Justin’s newest song, 10,000 Hours, with Dan + Shay. The clip was also a first for the couple, marking their debut as a couple in a music video. Dan Smyers and Shay Mooney were at the couple’s ceremony in South Carolina, and told People that they played the song at the reception at Justin’s request. “The wedding was amazing. The formal ceremony was in a chapel, it was a very fun wedding. The whole wedding was beautifully done. [We played 10,000 Hours which] was unplanned. Justin came up and wanted to do it.”

Photograph courtesy of Calvin Klein
Get the best of FASHION in your inbox Thanks for signing up!
The latest fashion, beauty and celeb news delivered right to your email #FASHIONforall Now, check your inbox to complete your subscription
We won’t ever use your email address for anything else
Want even more FASHION? Follow us on social media.