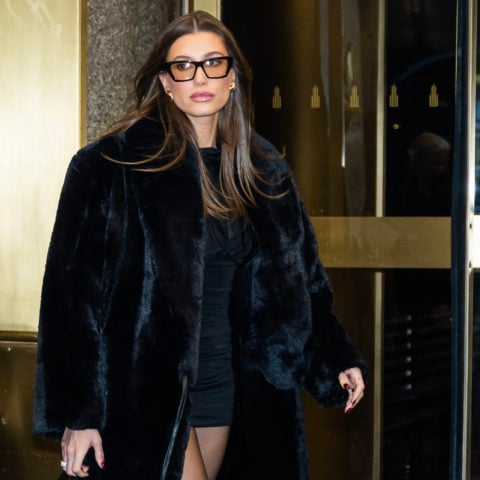 Hailey Bieber Has Convinced Us to Wear Sheer Black Tights

It started at the Met Gala. There she was, one Hailey Rhode Bieber, draped in lush white silk and fur and…wait, are those black super-sheer pantyhose? With strappy sandals?! Yes, indeed, Mrs. Bieber complemented her Bianca Jagger moment with a pair of hose that could have come from the pharmacy in a little egg-shaped container (IYKYK). That styling choice, however novel it seemed at the time, quietly confirmed what had been obvious for some time: opaque black tights have gone into retirement.

It also declared a saucier boss in the land of hosiery — consider almost-transparent black stockings the sexy, semi-wild, but totally put together cousin of the matronly nude pantyhose and humble black tight. In 2022, they’re the elevated choice for when you don’t want to go bare-legged. (And for the record, it’s safe to assume that Bieber’s sheer tights were likely from Wolford, not Walgreens.)

The resurgence of black pantyhose is in line with Pinterest’s 2023 trend predictions, announced on December 7, which included “Airy Styles” as one of next year’s top fashion trends. This ethereal, sensual style includes translucent, gauzy fabrics, like lace and tulle. Sheer black tights feel like how Wednesday Addams might interpret the trend — darkly romantic and definitely sexy.

Bieber has been repeating the same styling move ever since, opting for sheer thigh-highs with a cut-out blazer dress from Blumarine (above), then pairing whisper-thin black hose with a mini-dress and floor-length fur (below).

The Rhode Skin founder dabbled in transparent leg wear prior to the Met Gala, wearing a pair of lacy black trousers to a pre-Oscars party in March.

We’ve seen the chic hosiery on other celebrities, too. Aubrey Plaza juxtaposed sexy black hose with a preppy look in the Los Angeles Times in November and again with a sequined mini-dress on Late Night with Seth Meyers on December 12. (The White Lotus’s Harper would never… or would she?).

Bieber even sat between Kate Moss, Zoë Kravitz and Rosé at the Saint Laurent RTW Spring 2023 show in Paris in September and all three other women were wearing thin black tights. (The model herself opted for bare legs with her Peppa Pig-pink dress.) Notably, when photographed full-length, it became clear that Kravitz took the look one step further, wearing a sheer slip skirt over the pantyhose, while Bieber’s bestie Kendall Jenner was snapped wearing black tights as actual pants in November.

And while the thought of swapping the warm and safe embrace of a 80-denier control-top tight might seem scary (they’re the hosiery equivalent of a security blanket, after all), I, for one, am ready to upgrade to a sexy sheer stocking. Sure, I’ll live in fear of snagging the fragile netting with a jagged nail or rogue rhinestone, but what’s fashion without a little risk?