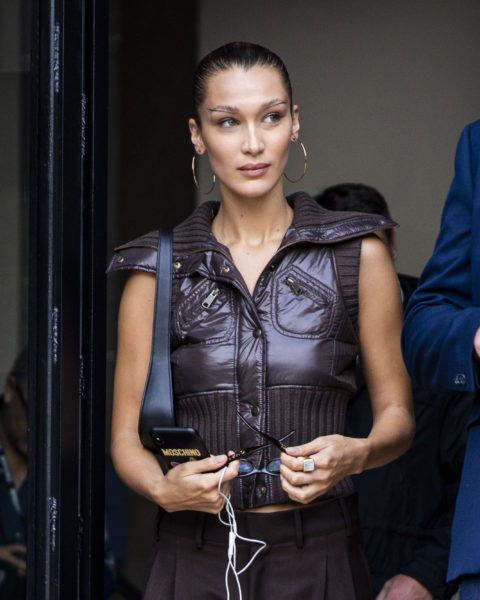 The Surprisingly Gendered History of the Vest

The vest has been making its return for some time now.

In recent years, it’s been spotted on the runway, and models like Kendall Jenner and Bella Hadid have been sporting a reimagined version of the garment sans undershirt.

And while you might associate this street style staple with the fashion of the early aughts, its lineage can actually be traced back to the 17th century, when King Charles II of England introduced the garment as part of “correct dress” for men (as fashion embraces the Regencycore aesthetic, it’s only fitting that the vest – and its royal lineage – follow suit).

The unassuming top would later symbolize rebellion against ideas of gendered clothing, today exuding a stylish aura of androgynous comfort.

Its appeal is in its versatility. When worn tightly with nothing underneath (à la model off duty), the vest gives off an undeniably sleek vibe. But this wasn’t always the case.

Originally resembling a floor-length coat in the 17th century, later versions of the vest were cut short and the attire became known as a “waistcoat.” Throughout subsequent centuries, the waistcoat’s elaborate embroideries and bright hues were traded in for more understated designs and colours.

For much of history, the vest was made exclusively for men — until it was used to subvert gender norms.

The vest is a symbol of gender rebellion, Fashion TikToker Gabrielle Jones said in a recent video, and the appropriation of men’s clothing. Women first adopted waistcoats as a form of revolt against the French government in the late 18th century, they noted.

Some people just think they’re ugly… would you wear any of these? #learnontiktok #fashionhistory #vintage #90svests

Vests designed for women was more commonplace in the late 19th century, according to the Fashion Institute of Technology in New York City, at which time the garment became a symbol of gender non-conformity.

In the 1920s, women wore the vest and other traditionally male garments to reject notions of gendered clothing. Gay women, specifically, have a history of using clothing designed for men in creative ways to defy gender norms, writes Dressing Dykes, a lesbian fashion history platform.

It was during this decade that women dubbed “modernists” would opt for an androgynous look by donning pieces made to be worn by wealthy men, including high collars, tailored jackets, short haircuts and, of course, vests or waistcoats.

The 1920s fostered a queer fashion subculture in which communities experimented more openly with gender fluidity. Rosalind Jana writes for Refinery29 that the vest has “historically [defied] not only convention, but also various restrictive laws surrounding gendered clothing.”

By wearing a piece of clothing that represented men of wealth and influence, queer and gender-diverse people were able to reclaim the symbolic cultural power that the vest has held throughout its history.

A century later, our modern fashion landscape is once again embracing the vest. Take Harry Styles, an artist lauded for his gender-bending style, who recently donned a flashy gold sequin fringe vest while performing on tour for his album Fine Line.

The trend has also been seen on Tyler, The Creator, a queer artist who’s known for embracing gender-fluid aesthetics via fashion statements like painting his nails and sporting a blonde bob wig. Tyler, The Creator has an impressive sweater-vest game, but unlike Styles, Jenner or Hadid, he often opts for the oversized layered version.

A sign of prestige and class throughout history, the vest now represents the new age of gender-fluid fashion.

Bella Hadid. Photography by Claudio Lavenia/Getty Images
Get the best of FASHION in your inbox Thanks for signing up!
The latest fashion, beauty and celeb news delivered right to your email #FASHIONforall Now, check your inbox to complete your subscription
We won’t ever use your email address for anything else
Want even more FASHION? Follow us on social media.