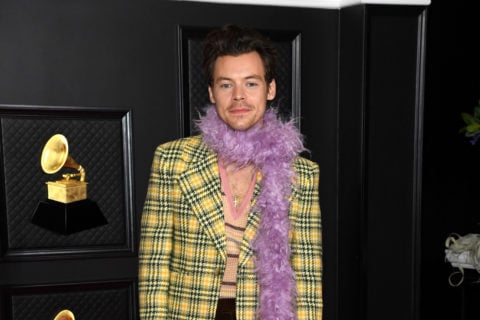 Harry Styles Wants You to Have Nice Nails

It was only a matter of time before singer-turned-fashion-darling Harry Styles stepped into the role we all know is right for him: beauty mogul. You read that right — Harry Styles has launched his own beauty brand, Pleasing, and we’re kind of freaking out.

Known for donning feather boas, mismatched patterns and statement jewelry, Styles has become something of a fashion risk-taker in recent years, and fans love his over the top style. On November 15, Dazed published an interview with Styles — alongside an experimental photoshoot — where he opened up about his Pleasing and its starting lineup: nail polish and skincare.

The Dazed cover photo served us a nipple-bearing Styles on a motorcycle sporting a custom-made Gucci outfit, complete with leather boots and violet flare pants. The “Watermelon Sugar” singer posted the shot on Twitter with the caption “Find your Pleasing,” his brand’s official tagline.

It seems only fitting for Styles to introduce his new line to the world by putting his non-conforming fashion sense on display. Photos from the shoot — which broke the internet, obviously — show Styles in avant-garde ensembles through which he channels a cloaked magician, a Victorian painting and something that can only be described as “rich aunt” energy.

harry styles is the only man EVER pic.twitter.com/MagO8gsm0r

Pleasing’s ethos is clear: It’s not about adhering to beauty norms, but rather celebrating unique identities. In a press release, the brand wrote it hopes to “dispel the myth of a binary existence.” The line thereby centres the conversation around bodies that have been historically excluded from beauty spaces.

Take, for instance, the Pleasing hand model: Harry Styles himself. In a promotional video, the new polish is displayed on his manicured hands that are tattooed and decorated with an assortment of rings. It’s a distinctly different beauty campaign, and we would expect nothing less from Styles, who’s clearly bringing his androgynous style to the line.

The brand’s first drop, Perfect Pearl, is available for pre-order on Pleasing’s website with shipments going out the week of November 29. Nail polishes in the collection include a pearly white, a clear iridescent matte topcoat and a curated set of four Perfect polishes.

Pleasing is also dipping its toes into skincare with two products: a serum pen that hydrates the under eyes and lips and an illuminating serum that comes in the form of iridescent capsules resembling pearls.

Styles stated sustainability was a big part of the development process. According to Dazed, the Pleasing line was created with “the lightest possible footprint in mind, using post-consumer plastics and compostable paper printed with bio-sourced inks.” Ranging from $27 to $87, prices reflect the often costly process of producing sustainable beauty products. Some fans have expressed disappointment with the price point — especially those of us in Canada, who can expect to pay hefty duty and shipping prices compared to our American counterparts.

There’s no doubt that there’s been an influx of celebrities venturing into the beauty zeitgeist — enter Ariana Grande, Addison Rae, and Billie Eilish, to name a few. But Styles seems to intentionally leave the door open for Pleasing to grow and expand into other areas.

“Do I have any idea where Pleasing will be in five years? No. Obviously I have an idea of what I would like us to be aiming at, but honestly, I don’t know,” the singer told Dazed. “That’s what makes it exciting to me.”

With the vague promise of other ventures in the future, we’re sure to be in for even more products that channel Styles’s unique aesthetic. For now, we’re simply left to wonder what product drops could come next. An exfoliating watermelon sugar scrub? It only seems right.