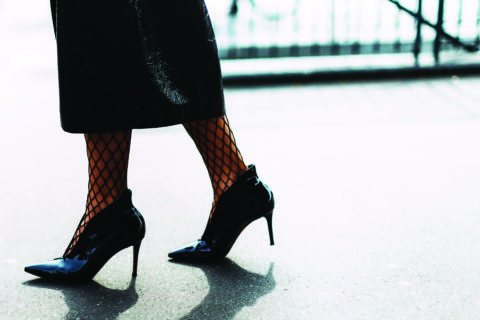 Last September, Kim Kardashian posted an Instagram photo of her topless torso with black openwork Wolford tights stretching above the waistband of her half-done button fly. Like so many of her social media endeavours, the post sparked a frenzy, and the fishnets-and-denim combo took off. Worn under distressed mom jeans or glute-grazing cut-offs, the look has become an #OOTD favourite of virtually every style darling, including blogger Chiara Ferragni, model Hailey Baldwin and singer Pia Mia. In April, Kardashian’s sister Khloé commercialized the approach with a new style from her denim line Good American that features holes patched with fishnets. Meanwhile, in June, Austrian luxury hosiery company Wolford reissued the Kaylee style seen in Kardashian’s post due to popular demand.

Fishnets are a garment loaded with innuendoes, thanks to their origin in cabarets like the Moulin Rouge. In the 1970s, early punks literally tore them apart, giving nets a bad-girl reputation that still resonates nearly five decades later. “It was part of the whole punk ethos of bringing in deliberately disgusting and objectionable styles that were scavenged from bad taste or pornography or both,” says Valerie Steele, fashion historian and director and chief curator of The Museum at the Fashion Institute of Technology. “Once that happened, fishnets were really ripe to keep being revived as a somewhat punk, definitely sexy component in fashion. It re-emerges periodically every few years.” She points to the powerful suggestion of violence inherent in a pair of damaged tights. “Have you fought off someone? Or are you just so degenerate that you wear clothes that are falling apart?”

Vanessa Cesario, the 25-year-old behind Toronto style blog The Brunette Salad, channels this rebellious spirit by using fishnets to add an element of surprise to her slick streetwear-heavy ensembles. “They’re a way to amp up outfits that are otherwise safe,” she says. “I think that now, more than ever, women, myself included, like to wear things that could have been seen as taboo.” And what could be sexier than having the confidence to push the status quo?