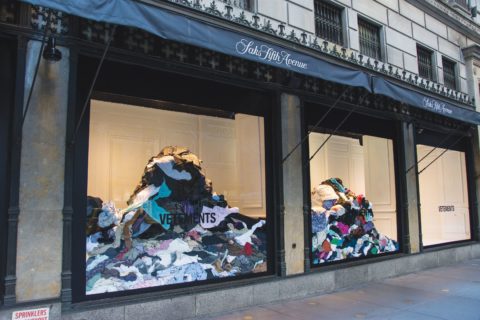 How Fashion is Moving Forward in the Era of Sustainability

In the 60s, people spent over 10 per cent of their income on clothes, earning them about 25 garments a year. Now it's less than 3.5 per cent, which works out to a staggering 70 pieces a year.

Years ago I had to clear 30 years of junk from my parents’ home while prepping their property for my wedding. We loaded a friend’s truck and headed to the garbage transfer station. As we drove into the dimly lit hangar, I felt like we had entered an ominous scene from Mad Max. We stood on the truck and literally threw garbage into the air to the sound of heavy-duty loaders crushing and pushing waste into piles that would eventually be moved to the real landfill. It was apocalyptic.

I was reminded of this eerie scene while I watched Stella McCartney’s Winter 2017 campaign video that featured models wandering through a landfill. Her collection, which is vegetarian, is also half comprised of sustainable materials. “The idea we had with this campaign was to portray who we want to be,” McCartney said in interviews. “Our man-made constructed environments are disconnected and unaware of other life and the planet, which is why there is waste.”

Vetements also raised the issue of sustainability and overproduction in a windows installation it did with Saks Fifth Avenue this summer. The display—a large pile of donated clothing and overstock merchandise—appeared in the flagship store on July 21. On August 10, all the accumulated pieces were donated to RewearABLE, a clothing recycling company that provides employment for adults with developmental disabilities with sustainability in mind.

“Garbage is what most brands produce today,” Vetements said in a post on its Instagram feed. “Mountains of stock are buried in outlet stores and stockrooms and have little chance of finding anyone who will want to pay for them. Overproduction is a huge problem that the industry tries to hide as it chases after fake numbers and reports of constant growth.”

McCartney’s prescient campaign and Vetements’ politically charged installation are sobering reminders of the “fast facts” associated with fashion. According to The Economist, global clothing production doubled between 2000 and 2014 because production cycles grew faster in tandem with plunging labour costs overseas and an abundance of cheaper materials.

"Fashion is a very dirty industry. Deadstock in the US amounts to $50bn every year. After the oil industry, fashion is the second-biggest polluting industry in the world. Fashion chief executives scream about sustainability, and how they plan to cut carbon emissions by 40 per cent and reduce environmental impact by 50 per cent in every interview. But none of those brands seem to understand that a much easier solution is just in front of them. Preventing overproduction in the first place would have an immediate effect on reaching those sustainability goals. The industry talks about conspicuous consumption — buying for the sake of buying — as the reason behind the growth in the luxury segment. But brands are producing more product than there is demand for. I call it conspicuous production, producing for the sake of producing and artificially inflating the numbers." #VETEMENTSxSAKS @financialtimes

In the 1960s, the average American household spent over 10 per cent of its income on clothing and shoes. This worked out to about 25 garments each year. And most of those pieces were made in America. But move into the 2010s and the picture changes dramatically. The average household spends less than 3.5 per cent of its budget on clothes, which works out to—wait for it—70 pieces of clothing a year. Only 2 per cent of those clothes are made in America.

The fashion industry is now the world’s second largest polluter after oil. At last count, the apparel industry accounted for 10 per cent of global carbon emissions. It’s hard to measure fashion’s footprint, but consider these three points alone: 1. Nearly 70 million barrels of oil are used each year to make polyester, which is now the most commonly used fibre in clothing. 2. Cheap synthetic fibres also emit gases like N2O (nitrous oxide), which is 300 times more damaging than CO2. 3. Americans throw away about 32 kilograms of clothing per person every year, the majority of which ends up in landfills. In Canada, it’s estimated that 85 per cent of discarded clothes end up there as well.

When I met with Kelly Drennan, founding executive director of Fashion Takes Action (FTA), I admitted to feeling uncertain of what I could do. “We’re trying to remove the overwhelming aspect,” she says of FTA, the country’s only non-profit currently focusing on fashion sustainability.

The group hosts the World Ethical Apparel Roundtable (WEAR) to showcase new promising developments. This month it will give a $50,000 Design Forward prize to a designer who combines style and sustainability. And FTA leads in-school education programs through the My Clothes, My World workshop. In these sessions, participants discuss labour rights, consumerism and environmental degradation. The students are asked to consider where their clothes come from, how they are made and whether they need all the pieces they own. FTA also has them turn an old T-shirt into a bag so they can explore the idea of repurposing. “Behaviour changes are really hard when you’re an adult,” says Drennan. “We’re programmed to shop. If we can convince youth in a fun way, we can talk about climate change through fashion. We can talk about social justice through fashion.”