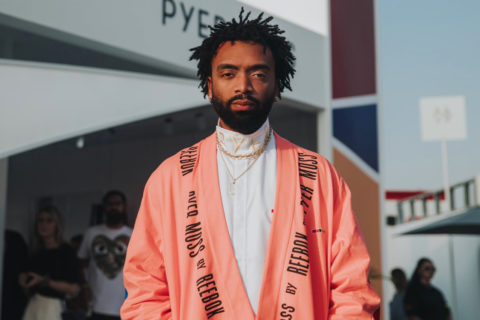 Kerby Jean-Raymond is named VP of creative direction at Reebok

Every time an interviewer would ask me what else I’d want to be a creative director for I would never say, but in my head it was always a footwear brand. Gotta shake shit up a lil yuh know? Thank you @reebok. I haven’t had a job in 9 years, so please get me a lunch box.

Kerby Jean-Raymond, founder of Pyer Moss, will lend his perspective to Reebok in his new role as vice president of creative direction. The industry trailblazer and winner of this year’s CFDA award for “American Menswear Designer of the Year” has worked with the brand for the past four years through collaborations with Pyer Moss but fans will begin to see his influence in a more permanent way in products released in 2022. “I am thrilled to be evolving my role at Reebok and joining the leadership team as the head of Creative Direction. I welcome this opportunity to help invigorate the brand with new ideas, while also focusing on instilling a sense of social purpose into our work,” says Jean-Raymond.

The latest addition to Yorkdale’s line up of luxe retailers is Louis Vuitton. The newly opened boutique has a two-story facade wrapped in LED screens showcasing the brand’s Monogram flower motif, marrying the concept of heritage and modern luxury. Inside the store, which offers the brand’s entire product assortment, a collection of art, furniture and objects sourced locally and from the brand’s archives can also be found. So, too can a giant cherry sculpture by Japanese artist Takashi Murakami which serves as a playful centrepiece in the space. Services in-store include personalization of leather goods and fragrance bottle engraving.

For the eighth year of Michael Kors’ Watch Hunger Stop campaign, which supports the World Food Programme (WFP), the brand has tapped its employees as the face of its efforts. In past seasons the campaign has featured celebrities like Kate Hudson, Halle Berry and Lupita Nyong’o but this year the brand revised its approach. “Casting and photographing our employees for this campaign was very special. People talked about their pride in working on Watch Hunger Stop over the years, and their eagerness to help those in need,” said Kors. The collection includes a special-edition Watch Hunger Stop 2020 white T-shirt and blue tote, and all profits from the sale of the pieces will be donated to the WFP.

Holt Renfrew collaborates with the Campaign for Wool and Canadian designers

Holt Renfrew and the Campaign for Wool have partnered with Canadian designers Smythe and Line to reimagine and showcase the uses and sustainable properties of wool with a capsule collection that debuted this week. The three coat styles designed by Line and riding blazer created by Smythe use fabric from British heritage mills. “Each piece was thoughtfully created with sustainability and the attributes of wool, at the core of the design process. The capsule collection exemplifies beautifully how this ancient fibre and textile craft can be transformed into great modern classic pieces,” says Alexandra Weston, DVP brand & creative strategy at Holt Renfrew. The collection is currently available at Holt Renfrew.

And ICMYI, here are the other top fashion news stories of the week:

Nordstrom announced it will go fur-free from 2021